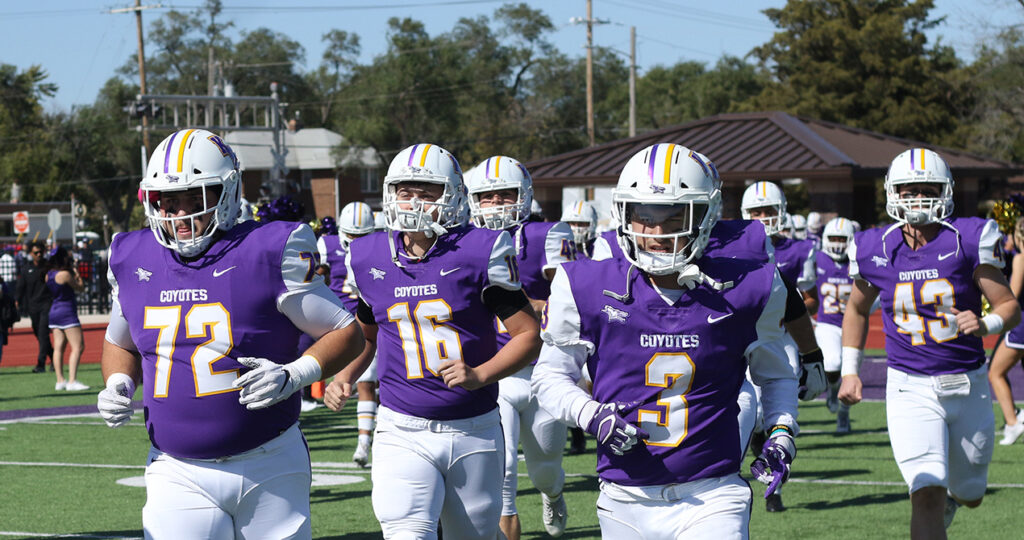 The 11-0 and No. 3-ranked Coyotes play Baker at noon, Saturday at Graves Family Sports Complex in the first round of the 2019 playoffs. Their three playoff games last fall were at Graves Complex as they defeated Langston (Okla.) and Dickinson State (N.D.) before losing to Benedictine in the semifinals.

KWU is the No. 3 seeding in the 16-team field that was announced Sunday night. Morningside (Iowa) is first, Marian (Ind.) second and Grand View (Iowa) fourth.

Quarterfinal games will be played November 30, the semifinals December 7 and the national championship game December 21 at Grambling University in Ruston, La.

Baker (8-2) is a member of the Heart of America Athletic Conference, which includes Benedictine. The No. 15-ranked Wildcats, a perennial NAIA power, started the season 2-2 but have won their last seven games, including a 30-10 victory over Benedictine on November 9, and a 28-21 victory over then-No. 17 ranked Evangel on Saturday that thrust them into the playoffs.

“Baker’s a team that you always hear as a top team in the nation at the NAIA level,” first-year KWU coach Myers Hendrickson said Sunday evening. “We’re going to dive into the film tonight and start studying as fast as we can.

“But just off the top of my head I know we’re facing an extremely talented team that plays in a tough conference, they’ve beaten a lot of really good teams this year and I expect this will be the best team we’ve played all season.”

The Coyotes completed their second straight undefeated regular season Saturday with a convincing 61-31 victory over No. 25 Bethel at Graves Complex. The second season begins Saturday and the tasks will be incrementally more difficult.

To read the remainder of this article, visit KWUCoyotes.com.