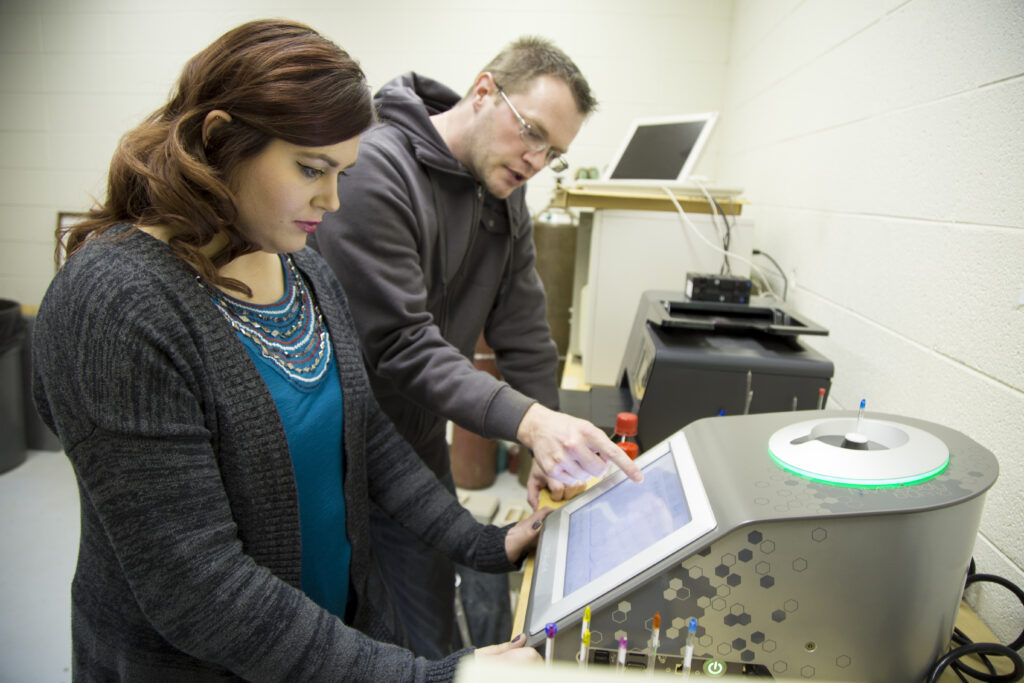 Kansas Wesleyan University is pleased to announce that it has raised $340,000 to upgrade, install and maintain science equipment so that cutting-edge science and technology labs are available for use by KWU students.

The funds raised were part of the “Breakthrough Project,” an effort to replace last-generation science equipment in KWU chemistry, biology, physics, astronomy and computer science labs. Last year, Kansas Wesleyan invested $100,000 and purchased a Nuclear Magnetic Resonance (NMR) Spectrometer and other key items. The NMR is used primarily to investigate the properties of organic molecules and is invaluable in biology and chemistry studies. Following that upgrade, KWU reached out to alumni who generously responded.

“In order to build on our success, KWU recognizes the need for investing in our science departments,” Dr. Matt Thompson, Kansas Wesleyan president, said. “This will help to ensure that every Wesleyan graduate will understand scientific principles and be fluent with research technology, and that we will continue to graduate scientists who can alleviate the critical labor shortages in advanced science, health and technology-related fields.”

The Breakthrough Project will make possible a new biology lab, named in memory of Martha (Wessling) Bieber, the wife of KWU alumnus Jeffrey Bieber ’71, and a new physics lab, named in memory of Dr. Charles B. Creager, a former KWU physics professor. The naming of the physics lab was supported by physics alumni Kent Cox ’65, David L. Fancher ’64, Larry D. Frutiger ’64, Nadim F. Haddad ’65, James E. Harvey ’64, Gary A. Scoggan ’64 and Lewis Edward “Ed” Temple Jr. ’64. With the support of alumni, the NMR will be named for Dr. Yuan Chiang, KWU chemistry faculty from 1966-2002. Improvements will also include the purchase, installation and endowment of chemistry, astronomy and computer science equipment.

“Working one-on-one with KWU students, I have been inspired by the energy, drive and compassion they bring to their studies,” Dr. Stephanie Welter, associate professor of biology, said.  “The resources we are adding with the Martha (Wessling) Bieber Biology Lab will be central to coursework and hands-on experience for those in scientific disciplines such as biology, biomedicine, genetics, ecospheric studies and community resilience and nursing, as well as those rounding out their liberal arts education.”

“We are thankful to have alumni and community supporters who have a vision of Kansas Wesleyan leading the field in undergraduate science education,” Thompson said.

Completion of the Martha (Wessling) Bieber Biology Lab is planned for fall 2017, with other projects to follow.

Martha (Wessling) Bieber graduated with a Bachelor of Science in Nursing from Marymount College in 1971. Her passion for the sciences was rooted in her nursing career, and she began her professional life teaching nursing in Kansas City and Colorado. She later became the CFO of the Bieber family business, Kay Jan.

Martha’s philanthropy was witnessed by her devoted community service, her financial help to those in need of a head start or assistance with college tuition, and her efforts in the recreation of the Fort Morgan, CO, Community Band Shell.

The Wessling family has resided in Saline County and has supported the Salina community for more than 145 years, first homesteading in southern Salina in 1871.

About Charles B. Creager, Ph.D.

Dr. Creager was a leader in his church, president of the Emporia Arts Council and the Breakfast Lions Club and a member of both the National Historic Preservation Society and the Kansas Historical Society. He was a long-standing advocate of equality and civil rights, a member of Common Cause, the ACLU and the advisory board of the first Kansas Civil Rights Commission.

Dr. Yuan Chiang was born in China, educated in Taiwan and completed his Ph.D. in chemistry at Kansas State before coming to KWU in 1966. He was promoted to full professor in 1974. He retired in 2002, at which time his former students created the Dr. Yuan Chiang Endowed Scholarship.

Dr. Chiang’s 32 years at Wesleyan has earned him great respect among students and professors. He brought national attention to Kansas Wesleyan through his research in ozone detection and measurement, a field he pioneered.