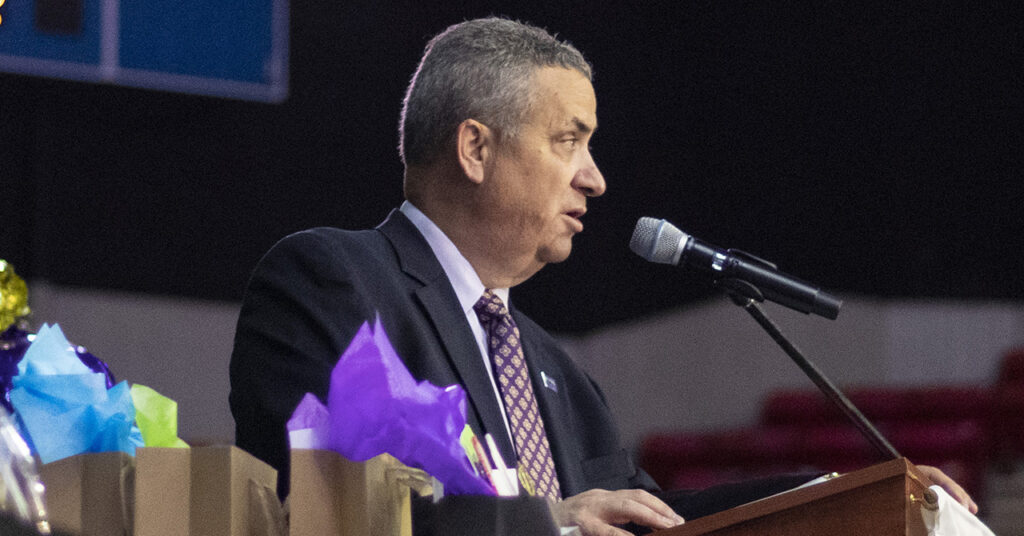 When one creates a nationally known athletics program, achieves every goal set out for him and his program, and is selected as the NAIA and KCAC Athletic Director of the year, other schools will take notice. So after six impressive years of service, it is not a surprise that Mike Hermann, vice president and director of athletics at Kansas Wesleyan University, has announced his resignation to accept the Senior Associate Athletic Director for External Relations at Old Dominion University in Norfolk, VA. Old Dominion is an NCAA Division I FBS institution, competing in Conference USA.

“I’m extremely excited for Mike to have this opportunity. When I hired him, I asked him to make Kansas Wesleyan University’s athletics program a model in the NAIA – a department respected for how we ran our program, admired for its game day events, and that provided an exceptional student-athlete experience, and he has accomplished that and more,” said Dr. Matt Thompson, president and CEO of Kansas Wesleyan. “I’m thankful for Mike’s leadership and contributions on campus. I’ll miss getting to work with him each day.”

During Hermann’s time in Salina, the KWU athletics program has had some of its most heralded years, earning 26 KCAC championships, including six in 2018-19. Last season, five KWU teams earned NAIA postseason bids. Plus, 19 of the 23 sport programs were honored by the NAIA as Scholar Teams with a team GPA over 3.00. In 2019, the Coyotes were the only school in the country to finish in the top three for two years in a row in the NAIA Champions of Charity program, which measures community service by student-athletes. The athletics program earned Gold Level NAIA Champion of Character recognition in the most recent acknowledgement, the first time KWU achieved the Gold level. Hermann made 28 head coaching hires over the six years and hired 15 of the current 16 head coaches.

The program made great strides in the community during his six-plus year run. The annual dinner auction (Night with the Yotes) has attracted more than 600 guests in each of the past three years, averaging more than $114,000 in revenue to benefit the student-athletes in each of those three years. In the six years, the event has generated more than half a million dollars towards athletics. In addition, the corporate community has step forward to support an enhanced corporate sponsorship program. Last year, when the football team hosted three home playoff games on its way to the NAIA semifinals, the corporate community purchased more than $50,000 in ticket sponsorship packages and the three events generated more than $90,000 in gross revenue. Hermann was part of the fundraising team that completed the drive for the $7.5 million Graves Family Sports Complex in 2013 and guided the opening of the stadium in 2015.

Hermann also worked with two other regional universities to develop community promotions. The Salina Purple Friday program is a partnership with Kansas State Polytechnic, working with Salina businesses, the Salina Area Chamber of Commerce and Rocking M Media to support the local universities by wearing purple on Friday and receiving discounts at participating businesses. The First Bank Kansas Smoky Hill Showdown is a season-long competition with rival Bethany. In addition to earning points for wins in designated games in the series, the trophy contest includes points for community service. Last year, the service elements focused on the Red Cross, the Special Olympics and local elementary schools. KWU won last year’s contest, 27-21.

“The last six-plus years at Kansas Wesleyan have been very special for Paula and me,” said Hermann. “I’m indebted to Matt Thompson for giving me the opportunity to serve in this leadership role. I am grateful to the coaches and staff that have committed to our goal of developing a model NAIA program and have served our students well. I also appreciate the students, who shared great athletics exploits over the past six years, but, more importantly have allowed us to walk alongside them during their transitional college years. It’s been a rewarding experience. Plus, Salina has been a great place to live and work. We felt at home right away. I’m confident I’ll have many lifetime friends from this experience, and I’ll always continue to cheer for the Coyotes.”

Kansas Wesleyan was Hermann’s first NAIA stop. He has worked primarily at NCAA Division I institutions including 12 years as director of athletics at Niagara and Towson universities. He also worked at Xavier, Seattle and Wright State universities. Hermann represented the KCAC and KWU in NAIA leadership positions, including four years of service on the NAIA Athletic Directors Association Board and recently began service on the NAIA National Administrative Council. His last day on campus will be for the home contests on Saturday, September 21 although he’ll complete some key projects after that date. The search for a new director of athletics will begin immediately.