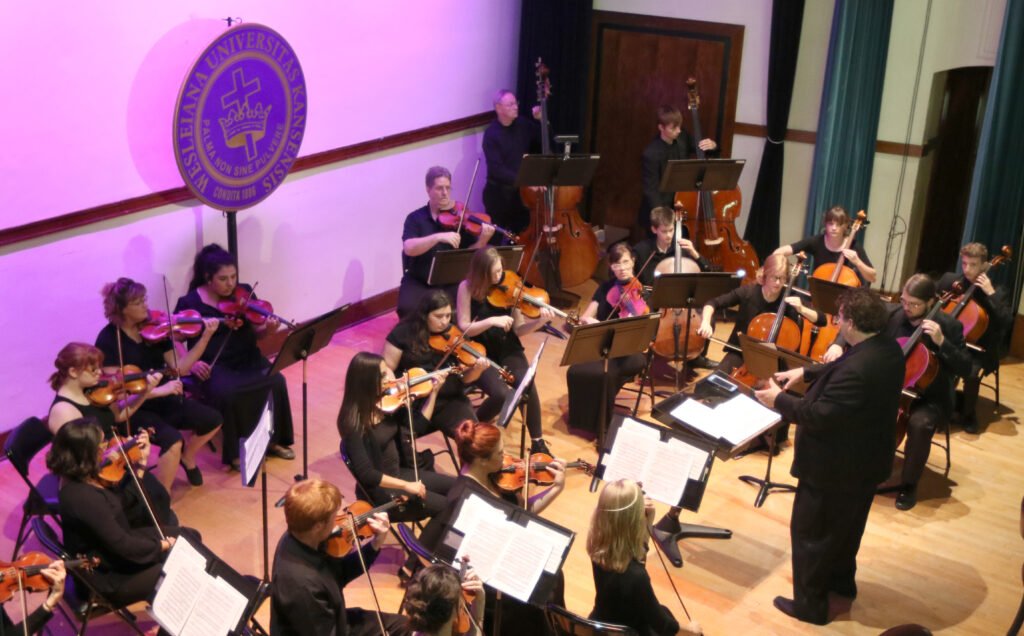 The Wind Ensemble’s portion of the program will include “Mayflower Overture by Nelson, in celebration of the 500th anniversary of the Protestant Reformation. The ensemble is under the direction of Dr. Carl Rowles, KWU’s director of bands. The String Orchestra, under the direction of Dr. Jesse Henkensiefken, KWU’s director of orchestras, will perform Vivaldi’s “Concerto Grosso in D Major,” Whitacre’s “October” and Newbold’s “Orion and the Scorpion.”

The Philharmonic Orchestra portion of the concert will be led by guest conductor Dr. Mark Laycock, professor of Music at Wichita State University. He holds the Ann Walenta Faculty of Distinction Endowed Professorship and has been recognized with the WSU Excellence in Creative Activity Award and the College of Fine Arts Excellence in Teaching Award. The orchestra will perform Bizet’s Carmon Suite No. 1 and 2.

The concert is free and open to the public.

Other fine arts events coming up at KWU include a Jazz Band and Percussion Ensemble concert at 7:30 p.m. Tuesday, Nov. 28, in Sams Chapel and a Singing Coyotes Recital at 7:30 p.m. Friday, Dec. 1, at University United Methodist Church. There will also be a reception for exhibiting artist William Counter from 5–7 p.m. on Dec. 1 in The Gallery, Sams Hall of Fine Arts. An Acting and Performance recital will be at 7:30 p.m. Thursday, Dec. 7, in Fitzpatrick Auditorium, Sams Hall of Fine Arts.