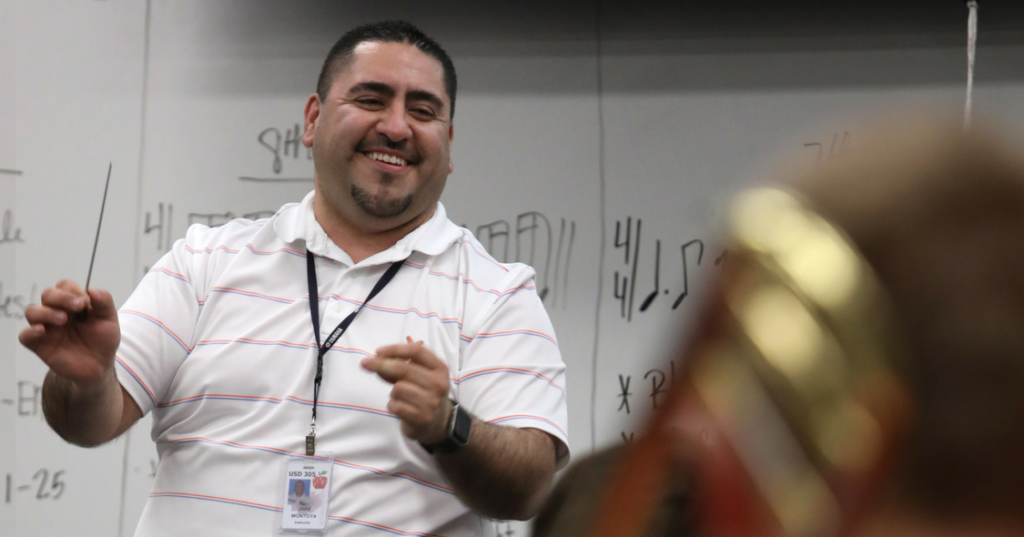 Home About News Best in Class

It’s 12:05 p.m., and 80 energetic middle-schoolers, who just came from the cafeteria, pour into a massive band room. It is stimulation overload as kids dodge about, piecing together instruments, rearranging chairs and searching for missing reeds. With the patience of Job and a simple raise of a hand, Jake Montoya ’05 brings the room to order, and band class begins.

His assistant, Mr. Rohrer, leans over and says, “It takes a very special person to be able to do that with a room full of 80 kids.”

It is that demeanor, plus a love for music and more than a decade of classroom management skills, that earned Montoya Secondary Teacher of the Year honors for USD 305 in Salina for the 2016–17 school year. He humbly turns his attention to his students.

“They work hard, and seeing the overwhelming joy they get when they accomplish something really inspires me,” Montoya said.

“At KWU, I learned to be patient and to never give up, no matter what some teachers tell you or what tests might reveal,” said Montoya, who encourages his students by sharing motivational videos and success stories of people who have been discouraged along the way.

Montoya began playing guitar at the age of eight and joined his family’s band at age 13. He eventually launched his career with a degree in Music Education from KWU. He earned a master’s degree in Music Education from Kent State University (OH) while serving in his first teaching position as band director for the Solomon School District (KS). In 2013 he joined USD 305, juggling multiple teaching roles at local elementary, middle and high schools. At Lakewood Middle School, he currently teaches more than 350 students.

He continues to have his hand in multiple projects. In addition to having his own country rock band, Split Decision, he is a member of the pit orchestra for musicals at the Salina Community Theatre; he plays lead guitar on Sunday mornings at Trinity United Methodist; and he is a junior golf coach at the Salina Municipal Golf Course.

“Anywhere that I’ve been, there’s this mindset that small towns have less. Most of my students have adopted that mentality, and I want them to understand that whether it’s in a big city or small town, they can achieve anything they set out to do,” he said. “I will continue to do my part and make sure our students have every opportunity at success.”

EDITOR’S NOTE: “Best in Class” was originally published in the Spring 2017 issue of Contact.