Both Basketball Programs to Open Seasons at Home Saturday 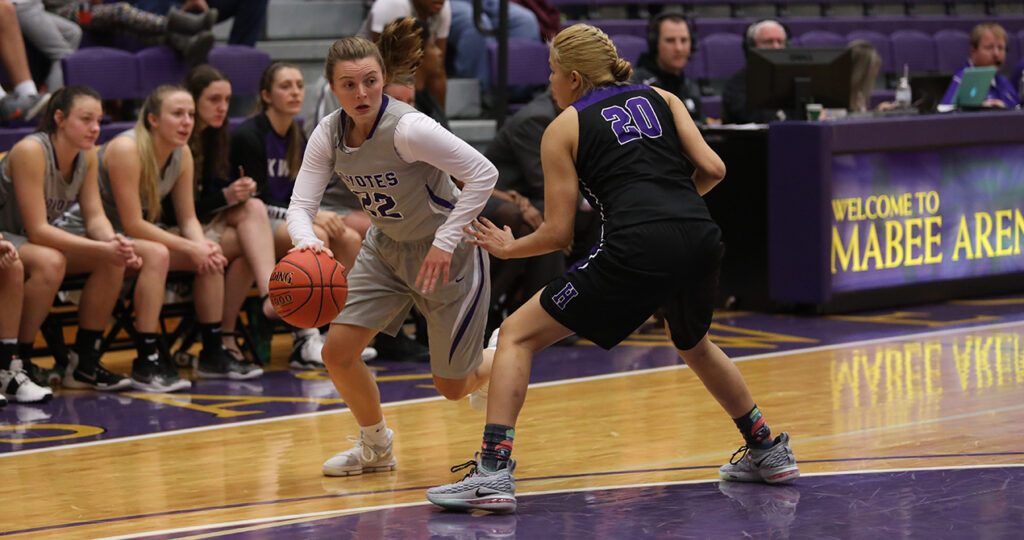 Both the men’s and women’s basketball programs open their seasons at home on Saturday, as both teams take on Midland University at Mabee Arena. The women’s contest is scheduled to get underway at 5 p.m., with the men’s contest to follow at an estimated tip time of 7 p.m. Below are portions of the game preview capsules from KWU Athletics. For more information, or to find the links to watch/follow the games, visit KWUCoyotes.com.

KANSAS WESLEYAN AT A GLANCE
The Coyotes were 21-12 overall last season, including an 18-6 record and third-place finish in the Kansas Conference’s regular season. They received an at-large bid to the NAIA Division II National Championships in Sioux City, Iowa, where they lost to College of the Ozarks in the first round. KWU was 11-5 in Mabee Arena and 10-6 on the road.

Senior point guard Haleigh Bradford (SR/Schertz, Texas) is the lone returning starter from last season when she averaged 8.3 points and 2.3 rebounds in 30 games.

Coach Ryan Showman, who’s in his eighth season and has a 106-80 record, is counting on a couple of newcomers to contribute immediately – Kelcy Hinz, a forward and transfer from Neosho Community College, and Gabby Mureeba (FR/Allen, Texas), a guard from Allen, Texas.

MIDLAND AT A GLANCE
The Warriors, like KWU, will be playing their season opener. They were 15-14 last season, including a 10-12 slate in the Great Plains Athletic Conference.

KANSAS WESLEYAN AT A GLANCE

The Coyotes were 17-12 last season, including a 15-9 record and fourth-place finish in the Kansas Conference. They were 8-7 in Mabee Arena and 9-5 on the road.

Four starters return from last season –guards James Brooks (SR/Frontenac, Kan.), Marquis Kraemer (JR/Aurora, Colo.) and Brayden White(JR/Topeka, Kan.), and center A.J. Range. Brooks averaged 16.3 points while shooting 40.5 percent from 3-point range (94 of 232). He led the KCAC in made 3-pointers, was named the conference’s Newcomer of the Year and was a Second Team All-KCAC selection. Kraemer averaged 10.2 points and 3.4 assists; Range 9.0 points, 6.8 rebounds and shot 63.8 percent from the field, and White 3.6 points and 2.6 assists. Kraemer and Range were Honorable Mention All-KCAC choices.

Coach Anthony Monson begins his fourth season and has a 46-42 record. His team was picked to finish third in the KCAC Preseason Coaches Poll.

MIDLAND AT A GLANCE
The Warriors are 0-1 on the season after losing to Bethany October 19, in Fremont. Midland led 48-38 at halftime and lost on a layup at the buzzer.

Ryan Williams, a 6-8 junior forward, scored a game-high 31 points on 12 of 23 shooting that included six 3-pointers (6 of 12). He also grabbed seven rebounds. Williams played the season opener last season, suffered an injury and missed the rest of the year. Freshman guard Jake Rueschhoff had 10 points and six assists, and freshman forward Kylan Smallwood had nine points and nine rebounds against Bethany. Sophomore guards Malik Martin and Bowen Sandquist added eight points apiece. Midland won the rebounding battle 49-31 but shot 34.3 percent from the field (23 of 67) and had 12 turnovers.

Midland Coach Oliver Drake is in his fifth season and has a 63-58 record.

The Warriors were 10-19 last season and were picked to finish ninth in the Great Plains Athletic Conference preseason coaches’ poll.