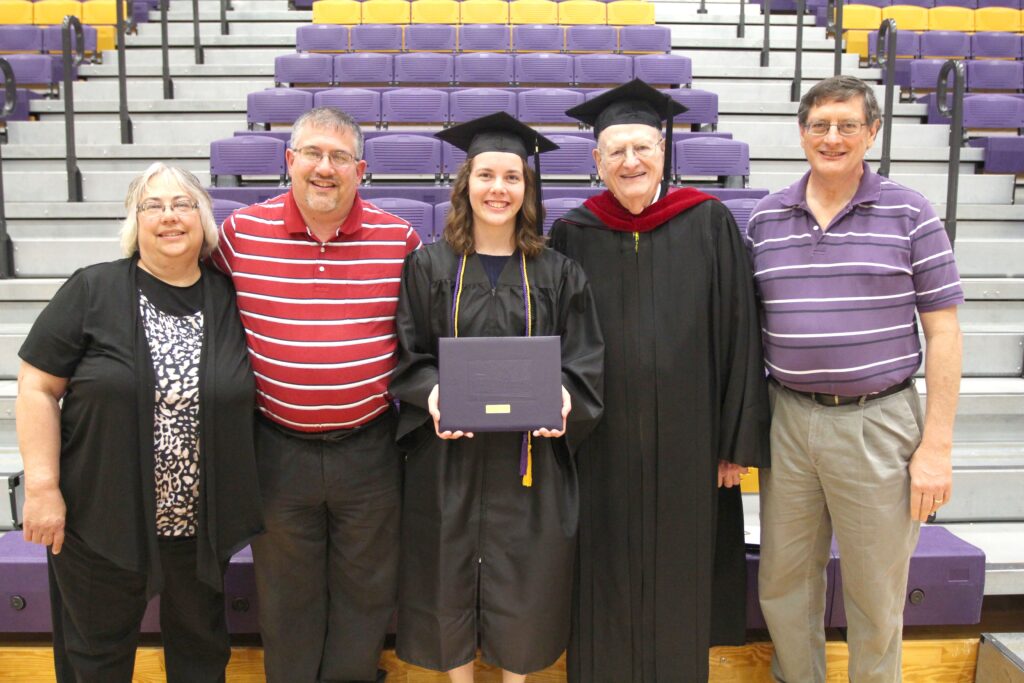 Kansas Wesleyan alum Amanda (Wilson) Colgrove ’15 was in for quite a surprise when her mom Darlene (Peterson) Wilson ’86 stopped by her office last month.

Amanda joined the KWU marketing team as a graphic designer in January, but this was her mom’s first visit. Uncertain where she should go, Darlene called from the Pioneer Hall parking lot for directions.

But something seemed eerily familiar.

As Darlene walked into the iconic brick building and down a half flight of stairs, she made the connection. Amanda’s office used to be the yearbook darkroom!

“I sat right where you sit!” said Darlene, a former yearbook staff member, to her daughter.

The Wilson family’s ties to KWU run through the university like the intertwining melodies of an orchestral score. Four generations have graduated from Wesleyan, including Amanda’s great-grandmother Hazel Price Wilson ’59, grandfather Eugene Wilson ’53 and father Roger Wilson ’87.

“When I’m looking through old yearbooks to find inspiration for things now, I can find my dad’s illustrations on them,” she said.

Her father, a music major with a passion for art, designed the ’85 and ’86 yearbook covers.

This type of interdisciplinary experience is common at Wesleyan. Last year, 94% of KWU students were involved in at least one activity outside their major.

Amanda participated in band and choir while a student, performing on the same stage in Sams Chapel as her dad and grandpa before her.

It was on this stage, under the beautiful, historic ceiling, that Amanda found inspiration for the Spring 2017 Commencement program. She replicated the intricate ceiling molding in her digital software, then used the pattern on the program cover. Although Amanda graduated in Mabee Arena, her parents and grandfather received their diplomas in Sams Chapel.

Wesleyan publishes a bi-annual magazine for alumni and friends called Contact. Grandfather Eugene Wilson, a retired Methodist minister, looks forward to each issue that arrives in his mailbox in Newton, Kan. This connection point with his alma mater is even more meaningful now that Amanda’s name graces the credit page. Glowing with pride, he passes around the magazine to other residents at Asbury Park, swapping stories about school and family and bygone years.

The Wilson family has deep roots at Wesleyan. Like the pioneers depicted in the Sams Chapel mural, each family member has cultivated a legacy of faith, integrity and innovation that will continue for many more generations.