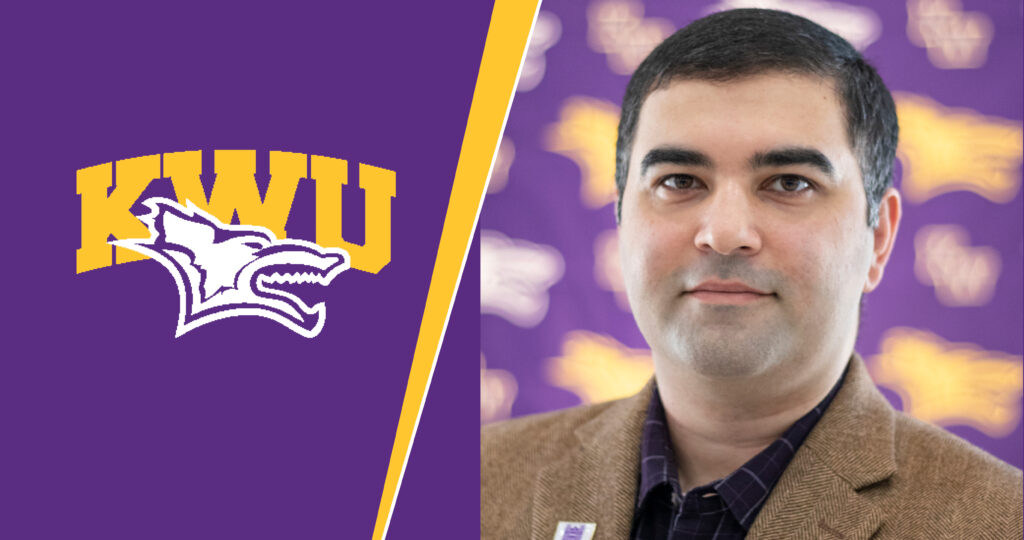 Growing up in Pakistan, Dr. Hassan Niazi knew early on he wanted to be an accountant. Unlike others before him, he didn’t become aware of his career aspirations through a book, a math class or a mentor. He discovered them while playing video games.

Niazi, the current assistant professor of Accounting at Kansas Wesleyan, says he gravitated to strategy games rather than traditional franchise games like Super Mario or Call of Duty. During gameplay, he became fascinated with the idea of managing his finances in order to develop better buildings and structures.

“That really enticed me,” he recalled. “You have this limited resource. Your victory depends on how efficiently and effectively you use it. And for that you need to have [accounting].”

Niazi studied accounting throughout high school and began taking classes in Pakistan at the Lahore School of Economics. While there, he landed a teaching assistant position, kickstarting his passion for educating others.

Unlike many of his peers, Niazi already possessed an accounting background before entering college. Armed with a desire to challenge himself academically, he moved to the U.S. about 10 years ago – a trek that undoubtedly merged his passions for accounting and education.

After earning his undergraduate and graduate degrees in accounting from the University of Texas at Dallas, Niazi left the Lone Star State and relocated to Aberdeen, South Dakota. An accounting instructor at North State University by day, Niazi spent his nights corresponding with friends from Pakistan about a potential business venture. Once again, video games came into play.

“[My friends] would say, ‘Hey, can you send us PS4 or Xbox controllers? Can you send us some sort of gadgets or clothing items that are on sale?’” he recounted. “Right at the end of 2014, I pitched them this idea, [by saying] “You are asking me for these goods [so often], that I think you can start doing this professionally and start a business.’”

After his friends conducted some research on their own, Niazi traveled to Pakistan during the summer of 2015 and helped establish ShopUS Ltd., an online retail store connecting Pakistani consumers to U.S. and European markets. With many American and European retailers not delivering products to Pakistan, ShopUS helps bridge the gap between manufacturers and Pakistani customers, handling delivery and transaction logistics.

“The level of customer service we offer is something that [Pakistani consumers] understand,“ Dr. Niazi noted. “They know that if they order something from the U.S., it is going to be of higher quality. They understand that value and they are willing to pay for that price.”

He added, “That is why we are upfront with our customers [and say], ‘Hey, if you are not willing to pay for this quality of product, then we might not be the right business for you.’ That’s something that is unique in Pakistan. Most of the time, companies that are locally owned are not that transparent with their customers.”

Aside from his teaching experience and business acumen, Dr. Niazi considers himself to be a lifelong learner. Recently, he earned his doctorate from the University of South Dakota in higher education administration. Despite having to step out of his accounting comfort zone, the professor returned to his bread and butter when composing his dissertation. Niazi’s research assessed the mission perspectives of universities in South Dakota by analyzing their finances. Using a unique, customized framework, he ranked and compared institutions based on their spending towards core mission, non-mission and mission supporting activities.

“Instead of going after individual university missions, I went after the core missions,” Niazi commented. “A lot of scholars in the field of higher education agree that teaching, research and service should be the core missions of all higher education institutions. When you combine the three – teaching, research and service into one, [the universities] can easily be compared.”

Now in his first semester at KWU, Dr. Niazi is excited to pass along his accounting and business knowledge to those entering his classroom. Assistant Professor and Chair of the Department of Business and Accounting, Dr. Tricia Petak, points to the benefits of having someone with Niazi’s background and experience instructing KWU students.

“In order to be in front of a classroom, you want to have some expertise,” Petak stated. “I think not only him being knowledgeable in accounting, but how businesses run in general, is very crucial to his approach in the classroom and to him being able to relate accounting concepts to students, and more so, business management majors.”

Dr. Daniel Botz, professor of Business and Accounting at KWU, echoes the sentiments of Petak, while also expounding upon Niazi’s attributes.

Niazi recalls how welcomed he felt when arriving on campus. Despite being at the University for such a short time, he already views fellow professors like Petak and Botz as mentors. As he embarks on his journey as a KWU professor, Niazi wants to enable students to have a strong accounting foundation.

Niazi hopes to leave a lasting impact on his students that transcends the classroom as well as their time at KWU. Given his love for accounting, teaching and strategy games, chances are he is already developing a strategy of his own to accomplish the goal.