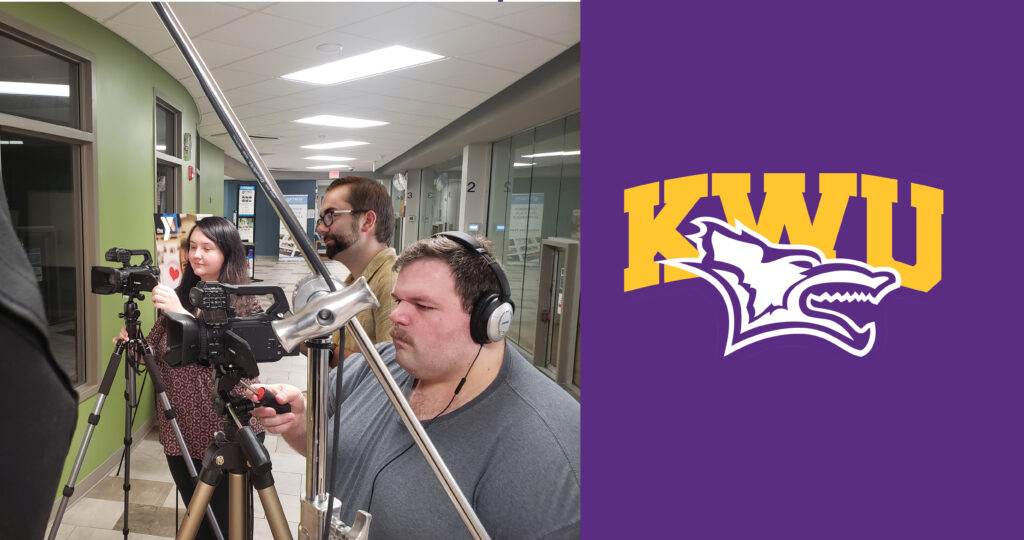 Note: Christmas by Candlelight 2020 will air free of charge on Sunday, Dec. 6 at this link. Communications Specialist Eric Brown recently profiled Gus Applequist ’14, KWU Foundation board member and the leader of Fili Creative, the company responsible for filming and editing the virtual concert.

A framed quote attributed to American illustrator and children’s book author Tasha Tudor hung on the wall of Gus Applequist’s childhood home in Salina. It read: “The gloom of the world is but a shadow; behind it, yet within our reach is joy. Take joy!”

Applequist wasn’t intimately familiar with Tudor’s artistry growing up. Nonetheless, these words remained cemented to the walls of his mind. Like Tudor, he is an artist in his own right – just cut from a different mold. A Business major during his days at Kansas Wesleyan University, Applequist ’14 possessed an affinity for music and media. In 2019, he forged his passions, starting his own video production company, Fili Creative, LLC.

Applequist’s vision for the startup wasn’t about merely creating a revenue stream. Fili Creative’s mission statement is filled with a greater purpose – “To fight for the good in the world by telling stories that matter.”

Applequist did not pen this mantra for the sake of having one. His desire is for he and his team to live and work by it, which is why Fili collaborates primarily with non-profit organizations. He points to the good such organizations are already doing and his desire to bring it to the surface.

“I believe strongly that heart matters,” he said. “Statistics are great, but what really matters is people and the way we interact with each other. In a lot of the work we’ve done, what the focus has been on is capturing people’s stories – capturing what they think and feel about the organizations that are important to them.”

In order to effectively capture those stories, Applequist needed a cast of characters who believed as strongly as he did in fighting for good. Enter Tim Burns ’15, a theater and communications major with a knack for audio visual productions. Finding himself at a career crossroads while living in Lawrence, Kansas, Burns received a phone call from Applequist, which later turned into a lunch meeting and a job offer.

Great friends during their days at KWU, Burns and Applequist shared a lot of similar interests, including an appreciation for board games. However, with Fili Creative, they had a chance to play the game of life in a unique way – and although it involved some risk, they felt the operation was worth the trouble.

“It was something that I couldn’t pass on,” Burns said. “As much as I love Lawrence and the people I met there, it was too good of an opportunity for me not to pursue.”

Not long after the two KWU alums embarked on their journey, they realized the need for a third player – someone with media production and non-profit experience. Burns suggested Amber Benning ’16, a KWU communications, speech and sociology major with an MBA to boot. Benning previously worked at the Ashby House, a non-profit emergency shelter in Salina, so the idea to bring her aboard was a no-brainer.

One of Fili Creative’s first projects involved working with the Greater Salina Community Foundation (GSCF) – an organization that seeks to build an endowment and meet charitable needs within the community.

“[The GSCF project] really opened my eyes to what’s out there,” Applequist noted. “I thought I knew a lot about non-profits, and I was amazed to find just how many there were in the community that I had never heard of, but not because they were not doing great work, just because my circle of influence hadn’t overlapped with theirs.”

Among the projects Fili Creative has been a part of within the last year, one that stands out is the Salina Emergency Aid Food Bank. Applequist and his team put together an overview video featuring more than a dozen interviews, each telling the story of how the food bank impacts the community.

“Seeing how our community comes around people that need help and feeds them and clothes them, I think that is hugely important,” Applequist said. “Getting that story out and making sure that continues into the future is paramount.”

In addition to producing video and audio pieces, Fili Creative also specializes in live events. Applequist grew up playing the bass, and when the world is not experiencing a global pandemic, he is the principal bassist for the Salina Symphony. Of course, the pandemic puts a damper on concerts and other live events, so many groups and venues are providing virtual experiences. The Salina Symphony is no exception, relying on the expertise of Applequist and the Fili Creative team to bring its performances to the digital screen.

“I have truly enjoyed working with Gus and his team at Fili Creative,” Salina Symphony Executive Director, Adrienne Allen, said. “Even before the pandemic, Fili was filming our concerts and had plans to shoot some promotional videos. When COVID led us to change the format of our concerts, I was even more grateful for Fili’s expertise. Their work filming and editing our virtual concert series has made it possible for us to continue to share music with our patrons.”

Salina Symphony concerts are not the only live events the Fili Creative team helped transform into virtual experiences. A longstanding tradition in the Salina community, KWU’s Christmas by Candlelight, like many other events, faced the potential of being canceled this year. Recognizing the importance of the concert and what it means to others this time of year, KWU administration and the music department decided to broadcast the concert virtually in a one-time showing. For the show to go on, KWU needed a video crew to shoot each ensemble’s performance as well as selected readings. Fili Creative answered the call.

Growing up in Salina, Applequist himself holds onto fond memories of Christmas by Candlelight. He reminisces about the years his parents took him to the concert even when he wasn’t enthused about going.  As he grew older, the Christmas tradition became more meaningful to him. During his time at KWU, he played in the show as a member of the orchestra. In his senior year, a fellow student named Hannah, who is now his wife, convinced him to sing in the choir. Accompanying those memories is Applequist’s strong desire for others to experience something truly special this season.

KWU Director of Choral Music and Choirs, Dr. Anne Gassmann, worked hand-in-hand with Fili Creative to present this year’s concert in a way that resonates with the community. While the pandemic presented logistical challenges, Gassmann helped ensure the show’s traditional participants were a part of the experience.

“I really wanted it to happen because of the students,” she stated. “They needed to look forward to something that brought them joy – and a time to be together even though we were distanced. I think the ultimate theme I’ve been having the whole semester is ‘find joy in the things you are doing.’”

Find joy in the things you are doing – it is a notion that Applequist seemingly holds tightly to, as well. Whether it is his work with Fili Creative, the Salina Symphony, his folk rock band (Everyday Lights) or his role as a board member of the KWU Foundation – he strives to find joy in every ounce of it, even when adversity arises.

“I think a lot of what we confront in life is less than desirable – things we’d rather not have to deal with,” he said. “But if we look hard and we work hard, we can find that there is joy to be had even in the rough times, even in the rough moments.”