Feature: Brockhoff Goes From The Court to The Calculator 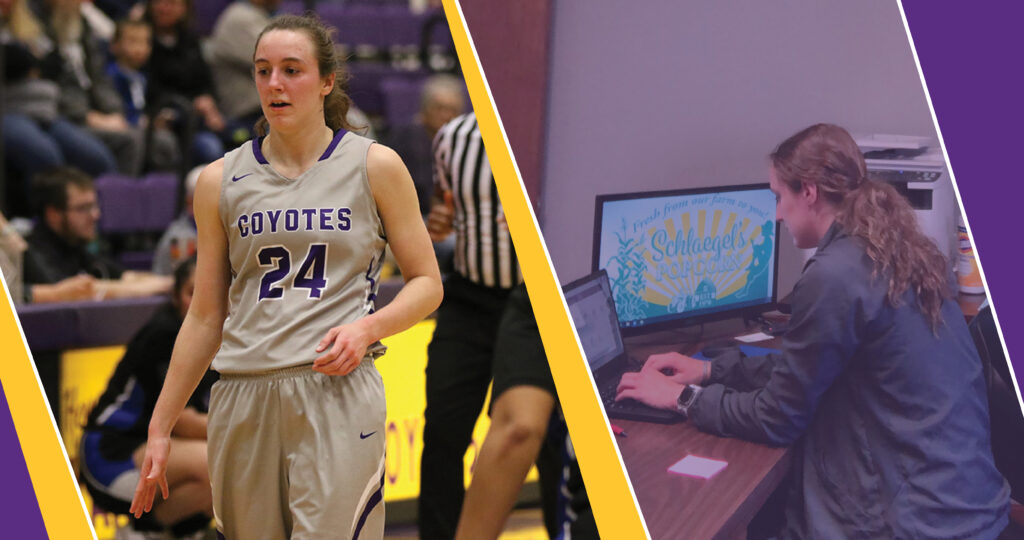 Home About News Feature: Brockhoff Goes From The Court to The Calculator

As she prepares for her senior year at Kansas Wesleyan, Courtney Brockhoff has come a long way in a few short years, literally and figuratively.

Brockhoff grew up in Hiawatha, a small town of approximately 3,000 tucked away in the northeast corner of Kansas. She had aspirations of playing college basketball, but they were nearly derailed by an ACL injury which wiped out her junior season.

“After my knee injury, there weren’t any looks from colleges because I hadn’t played at all that season,” Brockhoff recalled. “To achieve my dream of playing college athletics, I had to work hard throughout rehab and the offseason to be ready for my senior season because that is all I had left.”

That hard work paid off in the form of a strong senior campaign for the Hiawatha Red Hawks, which saw Brockhoff set a school record for three-pointers made. Her efforts caught the attention of KWU Women’s Basketball Head Coach Ryan Showman.

Brockhoff quickly found a new family connection upon visiting campus for the first time. “When I walked on campus, everything felt different. It gave that family atmosphere, and I knew I was welcomed.”

After starting out on Kansas Wesleyan’s junior varsity women’s basketball squad as a freshman, Brockhoff has now stepped into a role on the Coyotes’ successful varsity team.

This past season, KWU went 26-6 and captured its first outright KCAC regular season title in program history. The Coyotes had reached the second round of the NAIA Division II Women’s Basketball National Championship when the tournament was halted due to the COVID-19 pandemic.

“Courtney is an individual who is extremely coachable and will do anything for the team,” explained Showman. She is a great teammate, which is probably the highest praise I could give anyone. I am glad she’s on our team!”

As much success as Brockhoff has enjoyed on the hardwood, arguably her greatest achievements to date at KWU have come in the classroom and through the DECA program. This aptitude outside of Mabee Arena is certainly no anomaly for a Kansas Wesleyan women’s basketball player.

“Coach Showman recruits really good student-athletes,” observed Dr. Trish Petak, chair of the Department of Business and Accounting. “His girls have always been extremely respectful and disciplined in the classroom. Courtney represents that to the fullest.”

An accounting major, Brockhoff developed her love for the field early on. Her father, Doug Brockhoff, is an independent farmer, and Brockhoff assisted with his tax preparation. She also served as the accountant for the bank at Hiawatha High School.

Brockhoff’s abilities in accounting were quickly recognized by the KWU faculty upon her arrival in Salina in the fall of 2017.

“Courtney’s accounting professors have asked me about her, early in their semester, after they have recognized the quality work she produces,” Petak explained. “She’s the real deal.”

Brockhoff has contributed to the rapid rise of KWU’s DECA team, a competitive business squad that participates in interviews, exams and presentations to show their ability to respond to various scenarios. The team has earned 72 state medals and multiple top-10 national placements during its first three years of existence. Brockhoff was a top-10 national finisher in the Human Resource Management category in 2019 in Orlando, Fla.

“DECA has helped me in numerous ways,” Brockhoff asserted. “Before starting DECA, I wasn’t very comfortable with public speaking or doing one-on-one interviews. Over the past year, DECA has helped me to step out of my shell and become more confident in my speaking ability. All of the skills learned have been brought into my workplace and have helped me to become a better person.”

Petak has observed the same growth in Brockhoff as a student during her time at KWU. “Her most noticeable improvement is presenting in front of an audience. Courtney would be the first to tell you public speaking isn’t her favorite thing. I’ll give Courtney’s work with the DECA program all the credit for her improvement.”

The 2020 DECA nationals were cancelled due to COVID-19, further bolstering Brockhoff’s eagerness to get things back to normal for her senior year at KWU this fall.

“I am very excited to return to campus this fall,” Brockhoff said. “It’s hard not being on campus due to COVID. I think when everyone steps on campus this semester, there will be a lot of excitement because we haven’t been able to see each other since March. I personally can’t wait to see all of my teammates and friends. It was hard not being with them the second half of the semester.”

Before that much-anticipated reunion in Salina, Brockhoff will spend the summer back in Northeast Kansas completing an internship at Shlaegel-Yingst Accounting.

“Although COVID has created hard times, it actually helped my internship a lot,” Brockhoff stated. “With COVID happening, the tax season was pushed back until July 15. This has allowed me to gain a lot more experience, especially in the tax field.”

Looking ahead, Brockhoff is starting to map out her post-graduation plans, which may see things come full circle. Her love of accounting originated in northeast Kansas, and she is considering returning to her rural home region to help fill a void.

“I want to get my CPA (Certified Public Accountant) right out of college, work in accounting firms and grow from there,” Brockhoff explained. “One day, maybe I can open an entrepreneurship in northeast Kansas where there aren’t a lot of accounting people currently.”

Wherever Brockhoff ends up, one thing is certain. The small town girl’s combination of passion, hard work and newfound confidence will enable her to continue enjoying the success she has seen at KWU for many years to come.