Feature: Casper ’05 Proud to Serve and Protect His Hometown 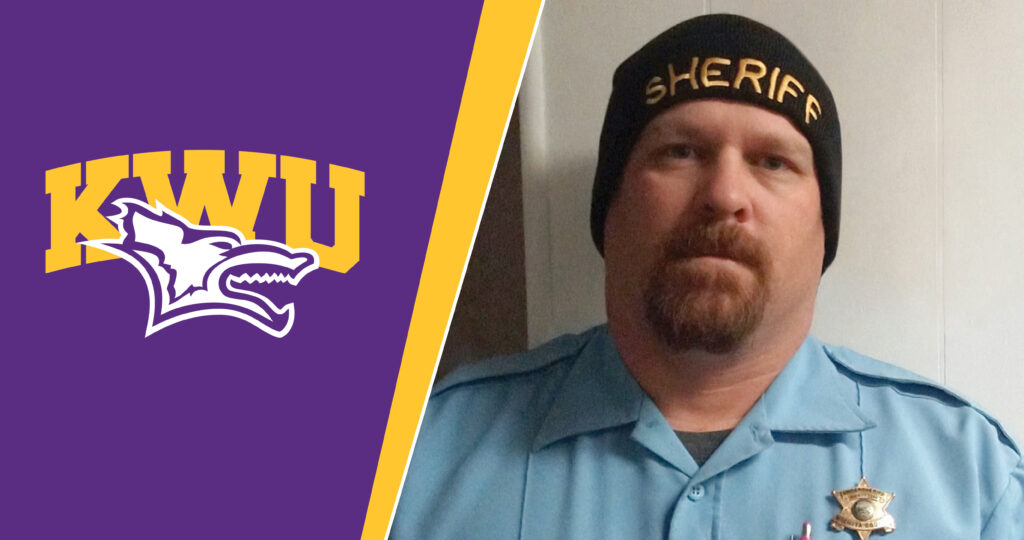 Home About News Feature: Casper ’05 Proud to Serve and Protect His Hometown

The classic 1960s sitcom “Green Acres,” tells the story of two individuals, who preferred two different American sceneries. A prominent New York attorney longed for farm living and the countryside, while his stylish Hungarian wife desired the penthouse view and Park Ave. Hence, the show centered around contrasting lifestyles and the adjustment required for the couple to settle down in small-town America.

Growing up in Leoti, there was never any debate for Kris Casper ‘05. He’s always preferred the quieter life of rural America. A criminal justice and sociology major during his days at Kansas Wesleyan, he eventually settled back down in his hometown, where he currently serves as the undersheriff of Wichita County. Later this month, Casper will turn in his badge for a new one, when he becomes the county’s new sheriff.

Casper is taking over the duties held by Sheriff Randy Keeton, who will retire after this year. Beginning his law enforcement career as a Wichita County deputy in 2010, Casper was promoted to undersheriff in 2015. In August, he won the primary before being elected sheriff in November.

Sitting under Keeton’s learning tree for the last five years has prepared Casper for this moment. However, he recognizes the increased pressure that comes with the role.

“The biggest change will be that it’s my responsibility now,” Casper said. “I don’t have anybody where I can ask, ‘Well want do you want to do?’ I’ve got to make that decision now.”

He added, “Ultimately, if there is a question, the sheriff decides what he wants to do. So, making those decisive moments count and making the correct decision in them, that is the part that is going to change the most.”

Casper’s role will certainly change, but his love for small town communities remains constant. As he sat in Professor John Burchill’s criminal justice courses at KWU, he identified some valuable lessons the textbooks weren’t teaching. These aha! moments led to many fruitful conversations between the professor and the pupil.

“Actually, it was because of Kris that I started intentionally including in my teaching style some of the differences between urban and rural law enforcement and criminal justice issues,” Burchill said. “Most of your textbooks always talk about things like emergency management and criminal justice in an urban setting, even though the majority of the agencies are more rural or small in nature. So, he got me to do a lot more research in my field and incorporate that into the curriculum, and that’s something I am still doing today.”

While Casper understood the importance of practicing law enforcement in different settings, his time at KWU only bolstered his belief in treating everyone the same, regardless of race, ethnicity or culture – and getting to know them.

“For us out here, we have a pretty diverse population,” Casper stated. “So, me applying what I learned in school was not just treating everyone the same, but trying to understand the cultures you serve.”

The current undersheriff also noted the necessity of relating to others during tense situations.

“De-escalation is easier to achieve when you understand where a person is coming from,” he added.

Casper honed his ability to understand and talk to others in a unique way upon graduating from KWU. During his first five years post college, he decided to live out a dream of guiding horseback rides in Colorado.

“Even that experience was good for being able to develop ways to talk to people that might not want to talk to you – especially the younger population,” he said. “Their parents would bring them out and we’d have to figure out how to help them have a good time, while sitting on the back of a horse, and they might not have ever done that before.”

Casper decided to trade in his horse for a police vehicle and began searching for opportunities to join agencies in Colorado and Texas. Eventually, he returned to Kansas, spending some time working at a juvenile detention center in Garden City. It was there he learned Wichita County was looking to hire more deputies, allowing him to go home to Leoti.

After watching his undersheriff mature through the ranks, Sheriff Keeton is confident Casper will wear his new badge proudly.

“Kris Casper has worked for the Wichita County Sheriff’s Office for over 10 years,” Keeton stated. “During that timeframe, I’ve seen Kris grasping for more knowledge. He does this so he can serve the community better. He has done an amazing job in serving the community of Wichita County and will continue to do so when he takes over as sheriff.”

Once Casper is sworn in, his focus will be on protecting and serving Wichita County as its sheriff rather than concentrating on what might lie ahead for him personally or professionally.

“It’s kind of the pinnacle of the deputy game, obviously,” he said. “Others might think that a guy might want to do something else when you retire – go run for Congress or something. And some guys would. I just want to make sure my community is a safe place for my kids to grow up in, [along with] their friends at school.”

He closed his thoughts on his future by saying, “That’s really the next step I see at this point in the game – doing my service, staying off the six o’clock news as much as possible and just keeping the peace out here until I am ready to retire.”