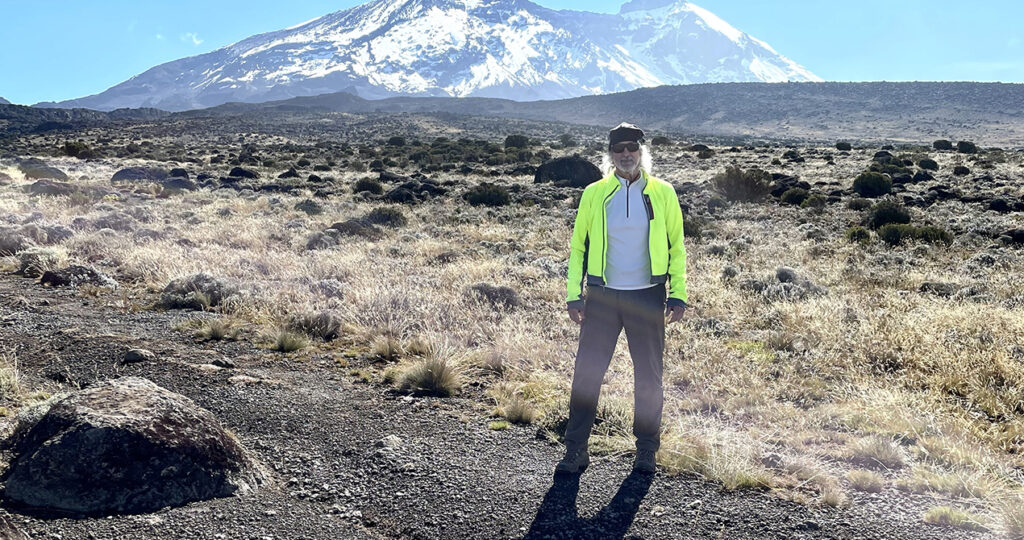 Home About News Feature: Climbing Kilimanjaro – Victory Not Without Toil

At the age of 60, Dr. Milt Allen is still learning. His most recent classroom, however, was an unlikely one: Mount Kilimanjaro.

The chair of the KWU Department of Music began his ascent of the mountain, which is the highest single free-standing mountain in the world, on Dec. 13 and reached the summit Dec. 18.

“I think you learn from anything,” Allen said. “Without question, (the climb) put things in perspective, especially when you have a life-threatening experience and think you might not come down from the mountain.”

Mount Kilimanjaro is a dormant volcano located in Tanzania, Africa. About 30,000 people attempt to summit the mountain annually, with about 60 percent completing the climb (in a non-pandemic year).

A few days into the climb, Allen began to fight altitude sickness. The severe nausea from Altitude Mountain Sickness (AMS) prohibited him from eating, and he also experienced the beginnings of edema, the buildup of fluid in the brain, lungs and extremities. The health struggles were compounded by the physical reality of climbing a mountain, including lower oxygen levels.

“The third full day of climbing, altitude sickness emotionally got us,” he said. “What was compounding it was we were burning 4,000 to 5,000 calories a day, and I was ingesting nothing. You’re saying to yourself, ‘Don’t think about it, don’t focus on it’ because medical help isn’t there. They carry an oxygen tank, but the only time they use it is if you’re coming down the mountain on a stretcher.

The decision to climb Mount Kilimanjaro, also called “Kili,” grew out of a perfect storm.

“It’s been a very challenging 18 months,” Allen said. “This fall, I hit the big 6-0, and we were in the middle of a major pandemic. (Climbing Kilimanjaro) has been something to look forward to.

“I figured, ‘Why not?’ I’m a runner, cyclist and former triathlete. That mountain’s been kind of hollering at me since I started going to Africa. I had to see why it was calling.”

While he has been cycling and doing triathlons for almost two decades, Allen is not an experienced mountaineer.

“I haven’t climbed a mountain in my adult life,” Allen said, but felt his baseline of physical activity set him up for success.

In addition to his cycling and running, he added trekking to his normal routine, completing between 100 to 130 miles per week.

“With hiking I would go out to Horsethief Trail at Kanopolis Lake, which was the closest thing to Kilimanjaro I could find around here,” he said with a laugh. “I would do the outward loop a couple times and knock out from 12 to 15 miles in a morning.”

The total distance covering “Kili” was manageable — 42 miles — but Allen said he knew he couldn’t train for the altitude on the flatlands of Kansas.

“It’s one thing to go to Kanopolis and knock out 12 miles. It’s another thing to knock out five miles that contains 40 to 45 percent grades and vertical drops,” he said.

From the beginning, climbing Kilimanjaro was different than the YouTube video tutorials Allen watched.

“We were five minutes in, and the heavens opened up. It just poured,” he said. “Richie (another climber) and I discovered this was not at all like the YouTube videos we had seen. After two hours of pouring rain, there was still an hour to hike to get to our first camp.”

All climbers are required to have a guide and support crew for the ascent. While initially he planned to climb solo with the support crew, Allen was asked to join another climber from Aruba for the adventure once he arrived in Africa. His climbing partner Richie was an experienced trekker, who hiked an average of 20 km per day during previous climbs in Peru and Chile.

“After the first two days, he said ‘This is nothing like (Peru or Chile),’” Allen said. “He said it was way more intense. He did not expect it to be as intense. Neither of us did.”

The grueling experience bonded the climbers and crew quickly. With his shoulder-length mane of white hair and status of oldest in the group, the crew began calling Allen “Papa,” an informal term for “father” in the region’s native language, Swahili.

Following two days of steady climbing, Allen said he awoke the second night “at 2 a.m. and my heart was beating so fast I couldn’t sleep,” he said. “I was trying to calm myself, but the air was getting thin. I thought, ‘This could be it. The trip could be over. This is a really dangerous situation.’”

After a rough night, the group faced a 5-mile climb that was supposed to take a maximum of six hours.

“We take off, and I’m in bad shape,” Allen said. “The air was getting thinner, I hadn’t eaten breakfast, I couldn’t drink. We were moving very slow. The guides were watching me and checking me, ‘Papa, you good? Papa, don’t sleep.’

“By the time we get to Lava Tower, both of us were pretty rough. I couldn’t talk. I couldn’t eat.”

Because he was fighting altitude sickness, the day’s climb took nine hours. The pattern of longer days of climbing continued for the remainder of the ascent.

Increased altitude was not the only obstacle. The journey involved hiking through five climate zones: rainforest, heather, moorland, alpine desert and arctic zones.

“The ascents and descents were getting tougher — much tougher. The air was thinner,” Allen said. “We were getting anxious because we were getting close. We’re at altitudes higher than Pike’s Peak.

As the days passed and the climbing intensified, the team shifted from the casual “Papa” to the endearing Swahili term of father, “Baba,” when referring to Allen. The affection was mutual. Allen said the expertise of the guide and porters was essential for the climb. A special bond was forged with one of the porters, Hussein.

“On summit night, I would walk three to five minutes, and I would collapse on a rock,” he said. “Hussein would come over and sing me songs and say, ‘Baba don’t sleep.’ He and another porter, Saleem, tried to keep me warm. I couldn’t get up to move without their help. They would lift me up. At one point, I just couldn’t move. Those guys, twice, put my arms around them and drug me for 20 yards. Then I found a bit more strength.”

The climb to the summit began on day six of the journey. In order to reach the 19,341 foot summit of Uhuru Peak at sunrise, the group set off before midnight. Allen said he knew climbing the final 3 miles would be grueling, both physically and emotionally.

“I’d been moving sick for three or four days, and they can see I’m struggling,” he said. “I had already gone deeper than I’ve ever had (to go before). I’ve never gone below the well that far or that much.”

“Richie pulls the head guy over and said, ‘He’s dying, you need to take him down,’” Allen said. “There was a lot of discussion. Amos, the lead guide, came over and asked me if I wanted to go down. I said, ‘No.’

“I was second guessing everything. I told myself, ‘All this time and you’re not going to make it. You’ve come so far and not finished.’ My thought was, ‘If I bail now, it will be a crushing defeat, but I just can’t do the descent in the dark.’”

The climbers were in an arctic zone, in the dark, with temperatures and wind chill combining for 10 to 20 degrees below freezing.

“I thought, ‘I’ll keep moving forward until I either pass out or it’s daylight. If it’s daylight, I can descend safely,’” Allen said.

He didn’t pass out, but at one point, Allen said he started to slide sideways off of the path.

“I felt Hussein and Saleem reach out and grab me. They just pulled me up, sat me on a rock breathing hard and not saying a word,” he said. “It was pretty clear what almost happened. Finally, after a little bit, Hussein reaches over, puts his arm around me and hugs me really tight and kisses me on the side of my head and says, ‘Baba, please take care.’”

As the climb approached the six-hour mark, the sun began to rise.

He kept pushing forward, minute by minute, until he heard familiar voices of the rest of the climbing party who completed the summit.

The victory of reaching the summit was, indeed, worth the toil.

“When I reached the top, everything fell away for a brief moment,” he said. “The pain, the tired, the pressure, the fear: I had made it. I had summitted Mount Kilimanjaro. I was literally floating above the clouds.”

Allen said cresting the summit was about more than the physical ascent.

“It gives the mountains you climb in your personal life and professional life a little different perspective,” he said.

It also taught lessons about leaning into adversity.

“I wanted to make a statement about fear and challenge, patience and perseverance, love and belief,” Allen said. “I am thinking of students and faculty. I thought by at least attempting to climb the mountain and overcome that obstacle, if it even helps one student, say, ‘I can do this (whatever it may be),’ then it’s worth it.