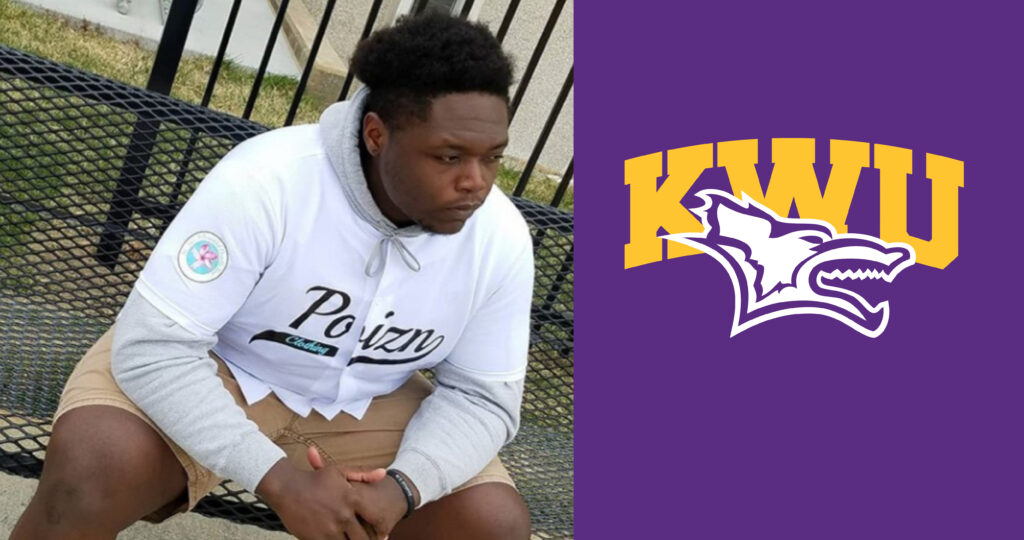 Home About News FEATURE: Fletcher ’20 Shares His Passion and Purpose

He wasn’t unlike many youngsters, finding joy in streetwear, movies, pop and hip-hop cultures and comic books.

Fletcher, though, saw a path for his future in one of those aspects – streetwear – and has combined it with a penchant for “drawing and creating things.”

“A lot of streetwear has drawn influence from all those things and more,” said Fletcher, a 2020 Kansas Wesleyan graduate, who was perhaps better known for his role as the starting left guard on the Coyotes’ dominant and record-setting football teams in 2018 and ’19. “That’s the beauty of streetwear, it’s a mashup of a lot of my favorite things.”

Energized by his love of clothing and talents for designing new looks, Fletcher chose to pursue a degree in Graphic Design at KWU. Two years after arriving, in November 2017, the idea of starting an online company was born and the following March, he unveiled his new business venture – POIZN Clothing — that offers a wide variety of streetwear and also is representative of his world views.

“It’s a mashup of a lot of my favorite things,” said Fletcher, who works as a freelance designer in his hometown of Dallas. “In 2017, I watched many other designers and artists I admire on the web develop something for themselves.

“So I started thinking about my future, what I want to accomplish after I leave K-Dub. Like what can I contribute to the world and what kind of legacy can I build for myself outside of sports. So coming up with the concept was fairly easy – it was just my view of the world.”

Mindful of the fact life and society are imperfect, he chose a name for the company that reflects reality and hope.

“POIZN represents a spotlight on topics that we as people feel uncomfortable talking about,” he said. “It is parallel to a lot of the problems that have been going in this world forever – racism, hatred, mental health, etc. – but we’re actually taking those problems and addressing them instead of pushing them to the side.

“The name is also a representation of just being a positive person. Doing something to bring peace and a sense of unity to humanity. Understanding your fellow neighbors’ struggles and being a positive force instead of adding to the problems we all face.”

Inspiration for his designs comes from within.

“I usually find a topic I feel strongly about and try to create certain designs that convey my message in a creative and appealing way,” Fletcher said. “I also choose styles that I like, styles I see others enjoy and also seek opinions from a variety of people.”

His coursework in Graphic Design was beneficial.

“My degree has helped develop my skills in the design field and also helped with learning more on marketing,” he said.

Creating and designing merchandise while developing a new company as a one-man entity, coupled with being full-time student and starting offensive lineman, kept Fletcher busy – to say the least – during his final two years at KWU.

The Coyotes were 25-2 on the football field, won back-to-back Kansas Conference titles with undefeated records, and advanced to the semifinals of the NAIA playoffs in 2018, and the quarterfinals in 2019.

Fletcher was a key cog in KWU’s high octane offense that shattered numerous university and conference records. He was named Second Team All-KCAC after last season.

“Managing everything was and is difficult,” he said. “So I would just tend to take a break from releasing or creating any designs during football season and focused on winning a championship.

“Football helped me develop friends and family who largely support me and my work. So if I needed models they would help or if I needed people to spread the word on social media they would always help out. And I’m always beyond grateful for them.”

It also gave him insight on how to persevere and succeed as underdog, as he is now working to position POIZN in the highly competitive clothing market.

KWU’s 42-7 thrashing of Baker at Graves Family Sports Complex in the first round of last season’s playoffs was a prime example.

“That week countless people counted us out and talked down on us and we went out there and blew them out,” he said. “So that’s always a good feeling proving someone wrong.”

“Daniel Fletcher has every quality and characteristic you are looking for a successful student-athlete,” Wesleyan Coach Myers Hendrickson said. “He played an absolute vital role in the success we had on the field and even better than that, he is an incredible person.”

Fletcher’s challenge continues to be producing original designs that appeal to the public. It’s an evolving process.

“I started off by doing print on demand, which is whenever a customer orders an item it is made once they order it instead of buying items in bulk,” he said. “I also buy in bulk sometimes as well. I go through to find local suppliers or other U.S. suppliers and whatever items I don’t sell out of the bulk I try to donate to Goodwill or something.”

Fletcher hopes one day to be in position to open a brick and mortar store.

“If POIZN in the next few years generates enough hype and loyal customers I would love to open up a store front, do giveaways, and donate proceeds at some point,” he said. “I always dream big in everything I create, but I also always have in the back of my mind to create stuff I enjoy, in the hope that others can get a small glimpse inside my crazy mind.”

His ultimate goals take him even farther.

“Long term I’d like to be able to do brand collaborations with companies like The Hundreds, Adidas, Carrot, etc.,” he said.

“He will be successful in all aspects of his life,” Hendrickson said, “and I can’t wait to follow his business career and all of his accomplishments to come.”