Feature: Football Preparing for Indiana Wesleyan in NAIA First Round 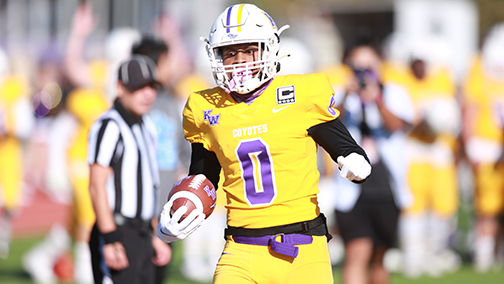 Home About News Feature: Football Preparing for Indiana Wesleyan in NAIA First Round

Stevie Williams and his Kansas Wesleyan teammates just wanted another chance to prove themselves and show they really are the team that won its first 10 games before falling Saturday in the regular season finale.

“No doubt, we’re on to the next game 0-0 and just want to show everybody why we belong in the (NAIA) Championship and we’re going to show them (next) Saturday,” Williams said.

Williams and Co. were granted a reprieve Sunday night when they were awarded an at-large berth in the 16-team playoff field. The Coyotes (10-1) are the No. 10 seed and will play fifth-seeded Indiana Wesleyan at Wildcat Football Stadium in Marian, Indiana next Saturday. Game time has been announced by IWU as a 1 p.m. Eastern kickoff, Noon Central time.

Tickets for the game will go on sale Tuesday. Saturday’s game will be streamed live on ESPN 3, and on the Indiana Wesleyan Stretch Live portal.

KWU lost to Southwestern 42-24 Saturday at Graves Family Sports Complex – the defeat dropping them from fifth to 10th in the final NAIA poll released Sunday night. The setback left the Coyotes, Southwestern and Bethel tied atop the KCAC standings with 9-1 records.

Southwestern drew the ninth seed in the playoffs and faces No. 7 Marian on Saturday, in Indianapolis. Bethel (9-2), the KCAC preseason favorite, did not get a postseason bid; the Threshers lost to NCAA Division II member West Texas A&M 52-9 Saturday.

The Coyotes are back in the postseason for the third time in four years after earning bids in 2018 under former coach Matt Drinkall and 2019 under current coach Myers Hendrickson. KWU won two playoff games in 2018 and one game in 2019.

To read the remainder of this story, please visit KWUCoyotes.com.