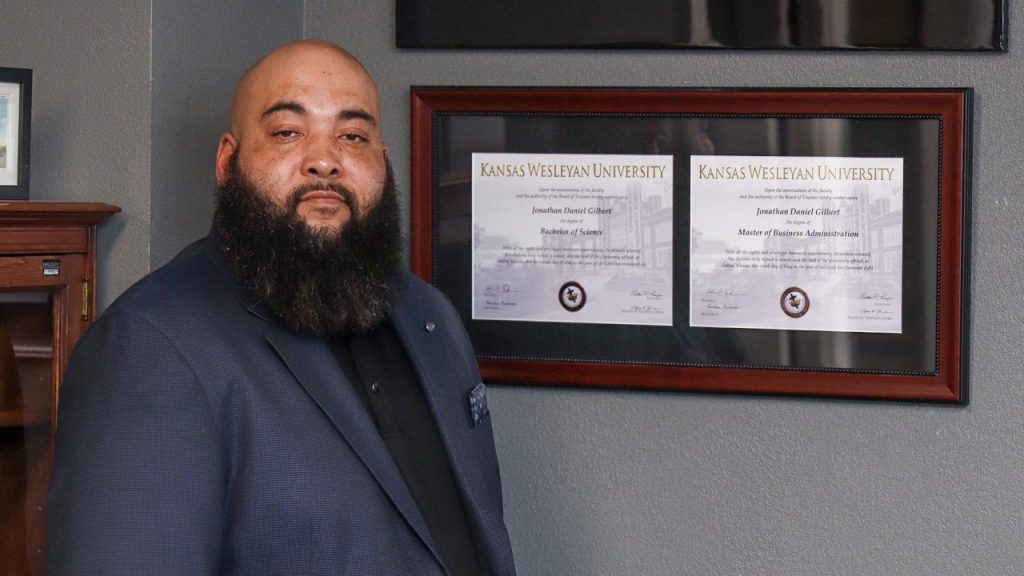 Home About News Feature: Gilbert ’06, G’08 Dedicated to Serving Others

For J.D. Gilbert ’06, G’08, a life of serving others began with a broken femur in high school.

“When I was in high school, I didn’t know what I was going to do,” he said. “We didn’t have social media, so info wasn’t right in front of us that we could explore. Even on career days, there weren’t a lot of people coming through.”

Despite the lack of information, Gilbert, a 1999 graduate of W.W. Samuell High School in Dallas, found his path.

Gilbert attended KWU as a pre-med major. While there, he worked part-time and full-time positions that allowed him to explore different workplace environments. While he never became a surgeon, working in local government and even in public health emphasizes Gilbert’s natural pull to serving his community.

He is currently the county administrator and public information officer (PIO) in Ford County. He works this in tandem with his recently awarded job as the Kansas Association of City/County Management’s (KACM) treasurer. In the latter position, he acts as “the bank,” handling invoices and finances as they arrive.

“I never sat down with myself and said, ‘I want to go in this direction’ — I’ve just always gone where I’m challenged,” he said. “You’re dealing with constant conflict in local government, if you don’t have that ability to want to educate and be patient, then you will not be successful, and that’s something I’ve always had innately.”

While his position at KACM is still new to him, he’s been county administrator and PIO for Ford County for the last six years, a position that oversees six Kansas cities. Serving two important roles means time management is key, especially in emergency situations.

“When we have something major going on, I might get 100 calls from state, local and national media every few hours,” he said.

“You just have to prioritize and figure out how you’re going to get the message out [to the community] easily and most efficiently,” he said. “The biggest thing I do is I control my time; I don’t let the media do it. If you let everything or everyone else dictate what you’re doing, you’ll never catch up.”

Mostly, Gilbert attributes his years of successfully working various positions among all personality types to one factor.

“You have to learn who you are as an employee and what you want to do,” he said. “I’ve been in positions where I haven’t necessarily gotten along with leadership, and I’ve still been successful, and that’s because I know who I am.”

Another strong contributor to his success is the support he got from Kansas Wesleyan as a student.

During his senior year, he was injured again in football, this time causing damage that left Gilbert, a once high-achieving student, on academic probation as he struggled to relearn what he’d been taught.

“The professors really helped me re-focus the things I could remember, and it turned out to be a fantastic experience,” he said. “The challenge of the private university is always good. Professors know your name and face; they know you. Going in, I didn’t know that was something I’d appreciate, but it really was.”

Neither injury that Gilbert sustained in his years of schooling kept him from continuing forward.

“I really am proud of getting a position like this, especially as a minority, and holding it,” he said. “And I’m proud of the area I’m in. Ford County is by and far my favorite place. I would do anything for the people I work with.”