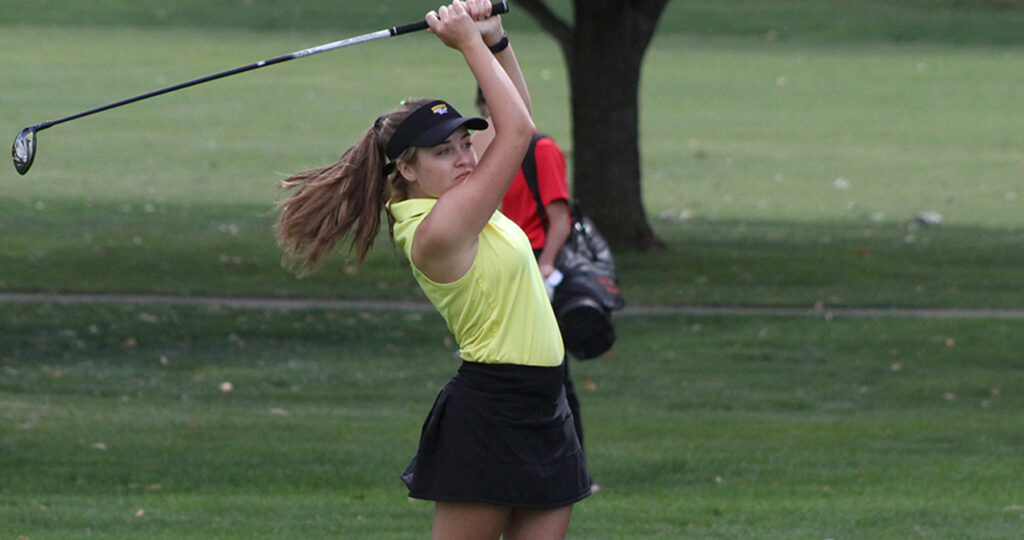 Hannah Hart approaches the challenges she faces in a classroom and on a golf course with the same mindset: focus on the task at hand and do it to the best of your ability, but don’t let it consume you.

“My major has a lot of homework and class time with all my labs,” said Hart, a freshman from Ventura, Calif. “But I also know how to balance my time between having fun and working too hard. That way I keep myself from getting too burned out.

The strategy served Hart well during a hectic first semester at Kansas Wesleyan.

An Eisenhower Scholarship recipient majoring in Chemistry with her sights on a career in forensics, she’s also a member of the highly successful women’s golf team.

For Hart, success isn’t possible without the right attitude.

“It doesn’t help when you look at what you have to do and you’re like ‘oh no, I don’t want to do this, this is a stupid project, why do I have to do this,’” she said. “I feel like the way you mentally approach everything changes how much you’re going to dedicate yourself and be willing to learn.”

Organization and a long-standing passion for learning are key attributes as well.

“I started using my planner in middle school and I’d write down my homework every day. I did it so I wouldn’t forget and was aware when things were coming due,” she said.

“I’ve always liked school so doing the work when I was younger was just fun for me. My parents never really had to push me for school. For whatever reason I’m lucky I just wanted to do it on my own. I like to learn.”

That passion is apparent to her instructors.

“Hannah is a conscientious student and hard worker,” KWU chemistry professor Dr. Dorothy Hanna said. “She is solid academically but feeling the challenge of balancing time required for athletics with school work.”

“And she has such a positive attitude. She’s got this great outlook on life, this kind of can-do, go-get-’em-type attitude. She really has the confidence that if she needs to do something, she’s going to get it done.”

That was obvious during her inaugural venture into collegiate golf this fall. She won the Evangel Invitational, placed fourth in the Virginia McCoy Invitational, was fifth at Tabor, 11th in the KWU Invitational and won all three of her matches in the Kansas Conference Match Play event as the Coyotes won their last five tournaments.

Hart describes herself as a “late bloomer” in golf.

“I didn’t really start shooting as well as I am now until my senior year, if not the summer after,” she said. “A lot of it was figuring out the mental part of the golf game. That took me the longest time to figure out — the right mentality to have when I’m playing and how to be relaxed and positive and focused. It’s still a work in progress but I’m definitely seeing a lot of improvement in my game.”

Hart‘s success includes how she deals with adversity. It starts with having a short memory.

“You can’t be perfect all the time so if you mess up on something up that’s okay, you just work on what’s next,” she said. “I had one or two tests that I didn’t do as well as I hoped. I really focused, and worked on the next test to make sure I bounced back and got my grade back up.”

Hendrickson witnessed that during the fall season.

“She’s such a positive person, she’s always looking for the silver lining in things,” she said. “So even if she’s having a bad game, she can still find the good parts of her game and rein those in and take it to the next level.”

Hart considers the Eisenhower Scholarship a significant achievement. It was established in the 1960s by former U.S. president and Abilene native Dwight D. Eisenhower and is awarded annually to incoming KWU students who exhibit high academic achievement.

“I worked really hard through high school to get good grades,” she said. “I worked on my writing and my public speaking. Being able to put it all together and earn a scholarship really showed me that all my hard work paid off.”

Hart’s eager to return to Salina after spending the holidays at home.

“I’m very blessed to live in southern California where I’ve been able to keep golfing during this break but I definitely am excited to get to the spring,” she said. “Our whole goal is to get to (NAIA) nationals and we all think that is very achievable for us.

“And I miss my science classes. I’m ready to get back.”