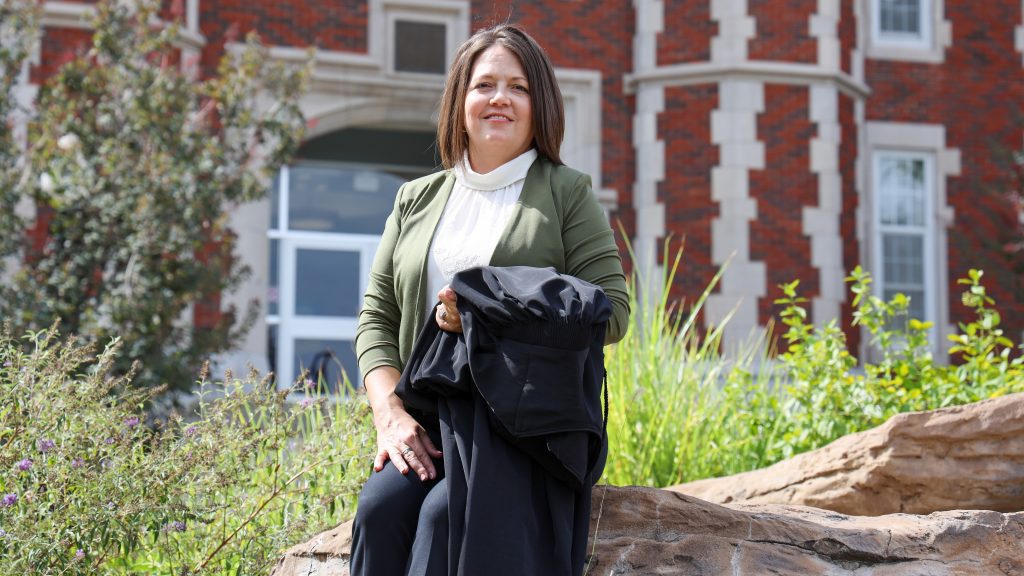 This story originally appeared in the Fall 2022 Contact magazine.

Public service is in Angela Coble ’94’s nature, even in her profession, but she sees it as so much more.

“Of course, we can vote in elections as they come up to hope to shape our community, but really public service is kind of the ultimate exercise in democracy,” Coble said. “By volunteering and actually working in our community every day, that’s how we can really shape our community.”

Public service is also Coble’s profession. Almost a year ago, she was appointed to the 14-judge Kansas Court of Appeals by Gov. Laura Kelly.

“I, of course, vote, but the best way to make sure we live in a place we want to live in is to get out there and do something about it. I feel like I started doing that at Wesleyan, and I’ve kept doing it to date.”

Kansas Wesleyan wasn’t on Angela Chesney’s radar in high school in Stockton. But she had been named Junior Miss Rooks County, and KWU offered scholarships to all county junior misses. So she came to check it out.

“I just fell in love with it,” Coble said. “Coming from such a small town, I was looking for that smaller community feel. Before I graduated high school, I came and tried out for cheerleader here at Wesleyan and made the cheer team. I was offered the Presidential Scholarship, so I had that group,” which met on a weekly basis.

“Between choir and cheer squad and Presidential Scholars meetings, it didn’t take long to get involved,” Coble said.

She lived in Pfeiffer, where she was an RA her sophomore and junior years.

Coble started at Kansas Wesleyan as a freshman psychology major in 1990. But after she took her first criminology class, a requirement for her major, she switched to criminal justice but kept psychology as a minor.

“My advisor was Don Olsen. He was great,” she said.

Then she took a Spanish class from Consuelo Diaz and added a Spanish minor.

“I would never have thought that I would go to college and minor in Spanish. But how could you go into Ms. Diaz’s class and not?” Coble asked. “She was so fantastic. She’s the one who really inspired me to go ahead and seek a minor in Spanish because she was so engaging and supportive.”

The Spanish was useful when she went to Mexico with a Habitat for Humanity group for 10 days.

“We raised money and went to Mexico City,” she said. “I never worked so hard in my life! We stayed with the locals, and they fed us at each of the (three) job sites. It was an eye-opening experience for me, never having been outside Kansas much, to see how other people lived, different cultures.”

Choir tours also exposed her to parts of the country she’d never seen.

“I was pretty shy, but having to put yourself out there, staying in host families’ homes, having to go into someone else’s house and make conversation — that added to the whole college experience.”

Also part of the college experience was being homecoming queen in the fall of 1993.

Her studies didn’t suffer as part of the “college experience,” which also included an internship and part-time jobs during her four years.

“I got the student Hall of Fame award at graduation and the academic award that year,” Coble said. “I still have my Kansas Honor Society pin.”

Less typical was that she married between her junior and senior years and they moved to North Hall. She had her first son four days before graduating.

While her then-husband went to medical school, Coble found a job in the clerk’s office of the federal court in Kansas City.

“I got to see all the cases that came in and follow the progression of the cases and read legal documents,” Coble said.

One of her supervisors, a lawyer, told her to read one of the documents and if she found it interesting, she should consider law school.

“That really cemented my thought that I would some day go to law school,” Coble said, and she applied to Washburn University School of Law.

Her first year, she commuted from Salina. She wanted to stay involved with her four children.

She moved to Topeka for her last two years, after she was divorced.

In 2009, she accepted a job at Kennedy, Berkley, Yarnevich and Williamson law firm in Salina as a civil litigator, but she was asked to work in family law and other areas, as well.

“The nice thing about that practice was it took me into a lot of county courts in surrounding counties,” she said.

From there, she accepted a job as a clerk for a federal judge in Wichita, then for that judge’s replacement.

“I always knew I’d like to do the law clerk route because I knew I’d like the research and writing of the law, more than appearing in court,” Coble said. “I like digging into the law, researching, then writing a brief.”

Law clerks are research attorneys, chamber counsel, law clerk — “It all means the same thing,” Coble said. “Basically you’re the judge’s attorney, doing research for her, advising her on how she should rule on specific disputes, then drafting her opinions.”

By the time she started applying for judgeships, she’d written more than 300 briefs.

In true Coble fashion, she’s also kept up with her outside activities.

She has been on the boards of the Salina Healthcare Foundation and Airport Authority. Other leadership positions have been with the Salina Emergency Aid-Food Bank, Leadership Salina, Four Rivers Support Committee, school and parent-teacher organizations, and professional bar associations.

“It’s just my nature that I enjoy being involved and want to be part of the community. I think Wesleyan really reinforced and helped to grow that,” she said.

Story and Photo by Jean Kozubowski