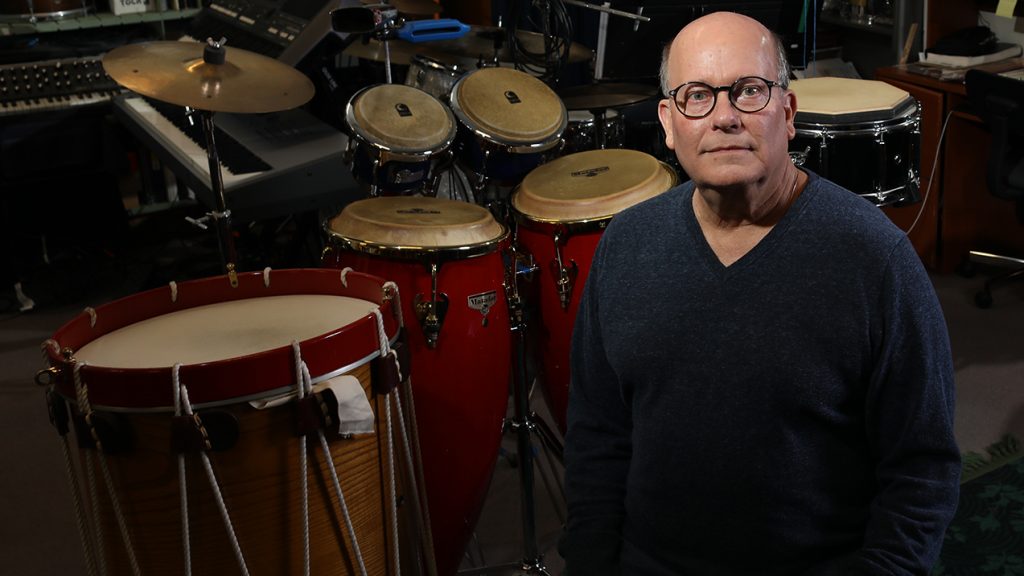 Dean Kranzler isn’t sure how many drums reside in his percussion studio at Kansas Wesleyan University.

“I have no idea — never counted,” he said, surrounded by drums. “You can never have too many drums.

“This is just the stuff I keep set up to use. I might have a few drums at home, too,” he added.

A Salina native, Kranzler has been a member of the music department at KWU since 1999.

His involvement with music — percussion specifically — began in his childhood.

He graduated from Salina Central, then Marymount College. He earned his master’s from Fort Hays State University (FHSU), and has taught across the north-central Kansas region ever since. His teaching credits include Marymount College, FHSU and Bethany College, to name a few.

His music experience isn’t limited to the classroom. Beyond his involvement in local bands such as Jazz Tangent and The Blades, he is a regular in the pit orchestra for Theatre Salina, as well as the principal percussionist at the Salina Symphony.

Kranzler began playing with the Salina Symphony in 1973.

Stein was the founder of the Salina Symphony in 1955. He also conducted the symphony for 44 years.

“Now I’m getting close to 50 years for playing with the symphony,” Kranzler said.

His tenure is valuable.

“He has created a bit of a family atmosphere in the percussion section that contributes to the experience the players have.”

In addition to teaching at the collegiate level, Kranzler also maintains private lessons. His private studio has been at SM Hanson Music since 1973.

“He does develop and nurture young, talented percussionists. They play in our youth program,” Allen said. “It brings continuity and dedication to the mission and a level of commitment to the organization that is really positive.”

One such student is Morgan Parker ’20, who began taking lessons with Kranzler when she was in fifth grade.

“I started band, and I had excelled,” she said. “Within the first six weeks, my band teacher said, ‘I think you need private lessons. I couldn’t keep up with you and the class.’”

She began private lessons with Kranzler in 2008 and continued through her 2020 graduation from KWU.

“I saw all the drums, and was so excited,” Parker said of her first experience in Kranzler’s studio. “I was the quietest kid during lessons because I wanted to soak up every bit of information he was giving me.”

She began with the snare drum and progressed to a drum set, then beyond.

“From a young age, he always pushed me to learn the next thing,” she said. “I was always getting involved in things like the Youth Symphony and solo repertoire at contests. When I became a young teen, he got me involved at the community theatre.”

Having a single instructor for a dozen years allowed for a continuous trajectory.

“Twelve years is a lot of time, but it felt so short because there was always something new to learn and discuss,” Parker said. “There was more depth of knowledge about how to be a working musician, and he also led me in the direction of teaching — how to teach percussion, passing on the art of music to younger students.”

The same instructor throughout college proved to be invaluable.

“I remember hitting some rough spots, not sure what I wanted to do in college,” she said. “Dean is and was the most supportive person. As a teacher and a colleague. I remember a lot of moments where we would have really great discussions about life and philosophy. That stands with me today even.”

Upon graduation from KWU, she moved to New York City and enrolled in a master’s program at New York University.

She said studying with Kranzler set the stage for her future.

“I always had my eyes on going to New York City,” Parker said. “I knew studying from Dean, I could get a lot of the knowledge and experience I needed to come here. As a musician, it’s not just studying, but it’s also time performing and playing.”

She recently graduated with a master’s in percussion performance from NYU. She worked in a few off-Broadway musical productions while earning her master’s, and is embarking on a career as a freelance musician.

“Salina and Dean are absolute gold mines to help set people up for success,” Parker said. “Dean is one of the most well-respected guys in Salina and Kansas for his love and passion for music, specifically for percussion.”

“I have never tried to achieve any awards. You just try hard, and something good comes along,” Kranzler said. “That’s how it was with the Kansas Music Hall of Fame in 2020, that was a complete surprise.”

He received the Bob Hapgood Award and was inducted individually, as well as inducted as part of the band, Midnight Flyer, which played together from 1979-83.

“Especially getting the award twice during the same year — during a pandemic — was a surprise,” he said.

Kranzler is a member of the Kansas Music Educators Association, National Association of College Wind and Percussion Instructors, Percussive Arts Society and the National Drum Association.

“I can’t imagine Salina music without Dean,” Allen said. “He’s worked with so many students, he shares his love with music and percussion with so many people. He’s such a part of the scene here because of his love for teaching.”

He is so beloved, in fact, that in 2021, a chair was endowed in his honor by Gus ’14 and Hannah ’16 Applequist. Hannah Applequist was one of Kranzler’s percussion students at KWU.

“I was completely surprised, I had no idea that was coming, it was an appreciated honor,” Kranzler said.

“There will only be one percussion chair,” Allen said. “Long after we’re gone, it will be the Dean Kranzler Percussion Chair, named in his honor. It supports the symphony now and into the future.”

Click here to watch an interview highlighting Kranzler and his legendary career.