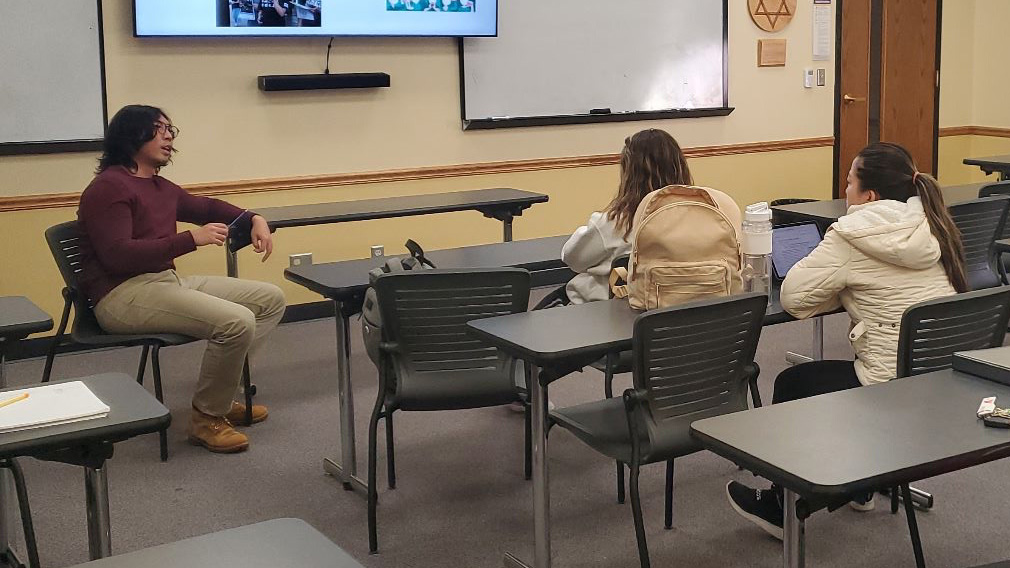 We can all learn from one another and help one another, even though we may be half-way around the world from each other.

Because Cheng Juk Hei is sure of this, he made the journey from Hong Kong to Salina to make connections and learn how this country deals with some of the topics he’s most interested in at home: racism, human trafficking  and ethnic minorities’ equal right to education.

Kansas Wesleyan University and its Department of Social Work is hosting Cheng, who goes by “Pete,” in the Professional Fellows Program, partnering with the National Committee on U.S.-China Relations (NCUSCR).

Fellows spend four weeks in an American organization doing much of what they do back home and sharing information. Cheng’s fellowship at KWU is from Nov. 14 to Dec. 9.

“One of the reasons I applied for this program is not only for factual knowledge,” Cheng said. “I can further international connections with people working on the other side of the world in the same field. Whenever we have the same kind of problems, we can reach out to each other and form a mutual support network.”

In Hong Kong, Cheng works for Unison, a nongovernmental organization (NGO). There he is responsible for minority policy advocacy and analysis, youth works, public education and media work.

“My role is more like a watchdog to the government, pushing them to implement a more inclusive and minority-centric awareness,” he said.

He is also a journalist who specializes in subjects related to Latin America, where he lived for almost two years, and its sociocultural comparison with Asia.

“Currently I am pursuing a master’s degree in human rights law,” Cheng said. “Then I applied for the U.S. program and I came here!”

Cheng is Kansas Wesleyan’s first international fellow, but Kelly Hopkins, now a KWU assistant professor of Social Work, was involved with NCUSCR when she was executive director of Child Advocacy Services in Salina.

“The fellows would come to learn about child abuse, parenting, our judicial system,” Hopkins said.

The fellowship program shut down for a couple of years because of COVID, she said.

“When the program started up again, NCUSCR reached out and said, ‘We have another fellow, could you host him?’ I was, like, heck, yeah!” she said.

“They assigned me to Kansas, hosted by Kelly, so that I can absorb some U.S. law about protecting women and how local NGOs work on protecting vulnerable, abused women,” Cheng said. “In applying for this program, I was hoping to explore how the U.S. can protect minorities from being trafficked to other countries or from being abused on the domestic level.”

He spends part of his time at the university, observing classes, serving as a guest speaker and shadowing professors.

“I share my knowledge with what is it like to be a minority in Hong Kong and what those social and human rights issues are that minorities face if they live in Hong Kong society,” Cheng said. “I also talk about human trafficking, specifically forced marriage, and how Hong Kong can deal with these issues.”

When Cheng discusses human trafficking, he is referring to resident women who are being taken back to their country of origin by their parents and forced to marry. Human trafficking in the U.S. more often refers to transporting people for forced labor or sexual exploitation.

Hong Kong is 92% ethnic Chinese, he said, despite being a capital for international trade and business. The other 8% is, for the most part, South Asians — Indians, Pakistanis and Nepalis — and Southeast Asians — Filipinos and Indonesians. About half of those are domestic workers and the other half are residents.

Many of these face racism in the city. Some are frequently stopped and searched by Hong Kong police because of racial profiling, consciously or unconsciously, Cheng said.

During the other part of his time here, Cheng volunteers at DVACK, where he has taken the same 40-hour training that volunteers take.

At DVACK, Cheng is learning how better to handle the trauma that victims of forced marriage face when the people trafficking them are their parents.

“It’s very hard for them to completely cut off the relationship by themselves,” he said. “They don’t know how to handle a toxic relationship, how to recover.”

“I take advantage of this chance (at DVACK) to talk to those in shelters who have been abused,” Cheng said, “to discuss with them the issues they face and to provide with them very casual conversation, which is kind of like mental support. And to share with them knowledge about how to provide stress relief, etc., etc. I can speak Spanish, so I take advantage of this to talk with Spanish-speaking women in the shelter.”

He spent his last year in college as an exchange student in Mexico, then stayed on for more than a year, visiting Latin America, Mexico and Guatemala. Inspired by his experience living with the indigenous Mayans, Cheng is interested in ethnocultural minority rights issues, Hopkins said.

Cheng speaks Cantonese and English, the official languages of Hong Kong, and is also fluent in Spanish and Mandarin Chinese. He is teaching himself Japanese.

“It’s been really eye-opening for our social work program because they get to actually hear from people from other countries and the realities of what people face,” Hopkins said. “In social work we’re always looking to empower people. It’s just really interesting to have the student learn from a global perspective.”

“I won’t say there are some things I want them to know, because that sounds quite arrogant,” Cheng said, “but I hope my stay here brings a fresh perspective on the social issues and political issues from a non-Western context. I hope my stay here can get them be more interested in issues that are happening in Asia, that would be great.”

“It’s not only good for our relationship with other countries, but it helps our students learn, and it gives them an opportunity to go learn, as well,” Hopkins said.

The program is reciprocal, but the fellow from Kansas Wesleyan has not been chosen yet, she said.