Feature: Nursing is All in The Family For Miller 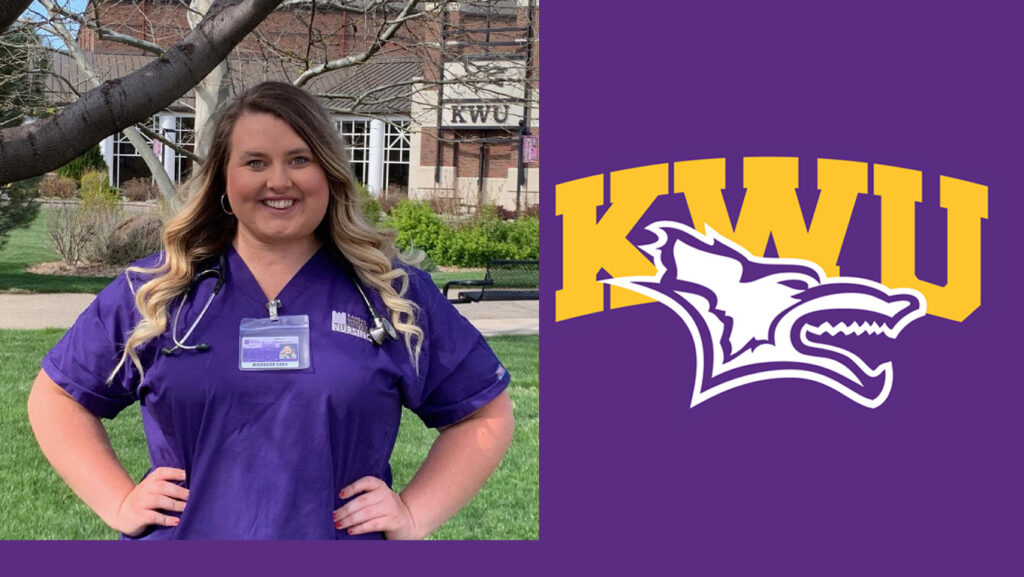 Home About News Feature: Nursing is All in The Family For Miller

It could be said that nursing runs in Darby Miller’s blood. After all, she is a third-generation KWU nursing student, following in the footsteps of her grandfather (Sid Fox ’93) and mother (Charity (Fox) Miller ’91). But her story and her passion for nursing run much deeper than that.

“Having both of them be nurses was both incredible and nerve-wracking,” Miller admitted. “I definitely have some big shoes to fill! Both exhibit the best parts of nursing, viewing nursing as more than just a job but as a way to value relationships.”

A life-changing bout of cancer at the age of 11 convinced Miller to join her grandfather and mother in the nursing profession. She was just the third person in the United States to be diagnosed with Myofibrosarcoma, which caused a lemon-sized tumor on her jaw. A 17-hour procedure successfully removed the tumor and part of her jaw, which was then replaced with part of her fibula. February 2020 marked Miller’s 10-year anniversary of being cancer-free.

However, some of the children Miller met and befriended after her surgery at Camp Hope were not so fortunate and ultimately lost their battles with cancer.

“It was then I decided that if I could do anything to help, I wanted to sign up,” recalled Miller. “I just hate seeing cancer win. Even more so, I hate seeing people lose.”

Fast forward, and that very mindset has served Miller well as a KWU nursing student.

“The qualities I see in Darby that make her a good nursing student and will help her excel in the nursing profession in the future are a caring attitude and determination,” explained Andrea Picklesimer, Assistant Professor of Nursing Education. “Caring is fueled by genuine love and concern for others, which Darby definitely displays.”

Despite growing up in Salina and having a family legacy of attending KWU, Miller began her collegiate career at Kansas State. She later transferred to KWU to continue her nursing education and quickly noticed something special about the program.

“It’s such a family-oriented and traditional school that is a lot like K-State in many ways,” Miller observed. “The people are so welcoming. In my interview, they were already telling me they were praying for me, and you don’t get that everywhere. You don’t get that kind of love from faculty. I knew they would have my best interests in mind, and that was most important.

“One of the most wholesome moments I’ve had so far at KWU is the ‘Blessing of the Hands’ that they do at orientation,” continued Miller. “They have someone come in bless our hands. That was very insightful to me. These hands are going to do wonders later on and are going to be healing to so many people. That reaffirmed how much I love this profession.”

“I believe that the nursing faculty and I strive to create a welcoming environment for our students,” Picklesimer asserted. “We consider our students family, and treat them as if they were. Our doors to our offices are always open, we are accessible to students, and truly care about their well-being and success in the nursing program. We will do whatever it takes to help them to be successful.”

One other factor which will aid in the success of Miller and other current and future KWU nursing students is the $5 million Nursing Education Center which is set to open later this year.

“We are so excited for it!” Miller exclaimed. “Peters Science Hall has a lot of tradition, and a lot of wonderful nurses have walked the same path that we are now. But the new nursing building will be such an incredible addition to this already amazing program. It will help all of us students to feel the reality of nursing.”

“The Nursing Education Center will benefit the faculty and students within the nursing program by providing us with a space to educate and attract more students,” Picklesimer contributed. “It will create growth and will also integrate teaching and clinical practice in innovative ways that will positively impact not only nursing in general but nursing in this community.

Speaking of graduation, Miller is on track to walk across the stage in May 2021. She is still debating her next step beyond KWU.

“At some point in my life, I want to go on a missions trip overseas to help give vaccinations and help with anything they may need,” Miller said. “I’ve dabbled with the idea of traveling nursing [her grandfather’s former profession] as well. I think it would be awesome to get to meet so many different people from different areas and to get a diversified feeling of nursing. My dream is to do pediatrics at some point for sure. I don’t know if that is pediatric oncology or general pediatrics, however.”

Wherever Miller ends up, one thing is clear. She has been well-trained and well-equipped to impact a world that, now more than ever, is in need of skilled nurses.