Feature: O’Connell One of KWU’s Unsung Stars During COVID-19 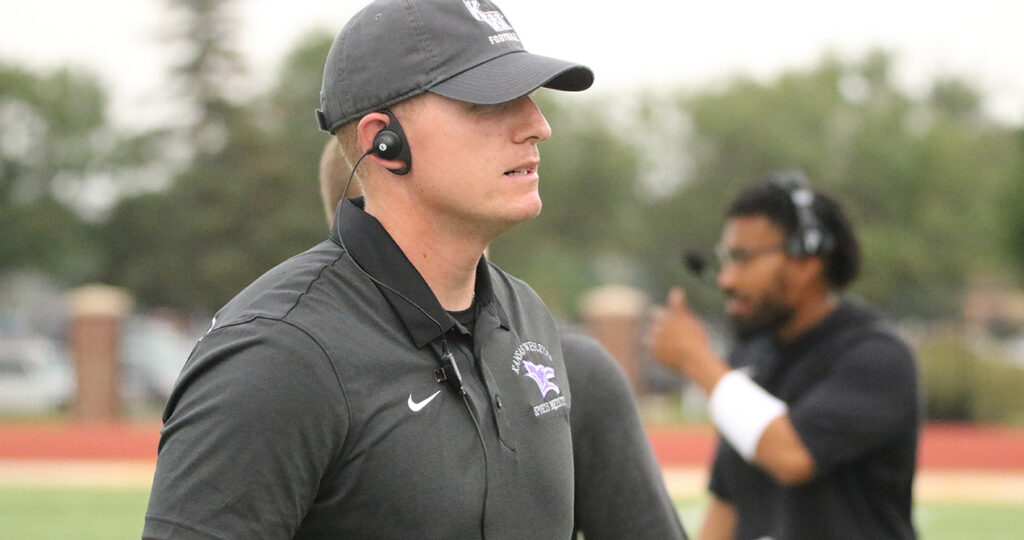 Home About News Feature: O’Connell One of KWU’s Unsung Stars During COVID-19

Dan O’Connell has started each day the past five months with the same, sobering routine.

“I wake up and see the meetings I have and what kind of webinars I have to educate myself on every new aspect of COVID,” said O’Connell, Kansas Wesleyan’s Head Athletic Trainer.

Before March, O’Connell’s job was mostly similar to what he had done his entire career, the last six as head trainer at KWU. Help Coyote student-athletes maintain their health, treat them when they were hurt, guide them through rehabilitation, serve as a sounding board and quasi-counselor/psychologist.

He continues to perform those duties, but his role has changed in ways he never could have imagined since March, when the COVID-19 pandemic began his relentless trek across the country and continues unabated today.

For O’Connell and trainers across the nation at every level in every athletic endeavor, the virus has ushered in an entirely new ballgame.

“I never, in my wildest dreams, ever thought I’d have to figure how to navigate athletics during a pandemic,” O’Connell said. “It’s been a completely new experience, a very challenging experience.

“When I was in school we took a general class where you learned your basic medical stuff – basic illnesses and sickness. But we never really touched much on pandemics and stuff like that. It’s all been new.”

Since the pandemic began O’Connell and assistants Elizabeth Ketchum and Christian Galindo have become students again in an attempt to learn all they can about the virus.

“Johns Hopkins (University) had a free course anyone could take, so getting that stuff and going through that whole course, educating yourself – in a sense going back to school on a lot of this stuff,” O’Connell said. “Terminology and just trying to figure things out and understand how the virus works.”

“Where we were two months ago is completely different from where we are now; where we were a month ago is completely different now,” O’Connell said. “That’s been the toughest part and the most frustrating part.It’s the idea that whatever you have down you have to be ready to adapt, move on, adjust and do your best with what’s coming down the pike.”

O’Connell works daily with numerous entities, including team physician Dr. Matt Pyle; Salina Regional Health Center; the Kansas Department of Health and Environment (KDHE), which is in constant contact with the Center For Disease Control and Prevention (CDC); KWU administrators, coaches and staff, and the Kansas Conference.

“It’s a big team effort,” he said. “That’s another thing that’s been really nice, it’s not just me taking this thing on for Kansas Wesleyan. It’s the conference as a whole. We are all working together to combat this virus and make life easier for all of our student-athletes at all of our institutions so that we’re all safe and we all can compete and keep these positive cases to a bare minimum when we do get them.”

Recent months have been spent preparing for the arrival of KWU students this fall and making plans for keeping them and the campus and Salina communities safe.

The process begins in earnest this week when students from states on KDHE’s quarantine list, including Florida and Arizona, arrive and begin mandatory two-week quarantines. They will stay in hotel rooms across Salina and will be monitored on a daily basis.

“One of the nice things about being at Kansas Wesleyan and Saline County is that hand-in-hand partnership,” O’Connell said. “Saline County has done a great job in terms of helping us with that type of hurdle we have go over. Finding hotels and rooms for us to be able to quarantine student-athletes, and students in general, who need to be quarantined for two weeks.”

Move-in dates are August 5 for new students and August 7 for returning students with the fall semester beginning August 10.

The quarantine is the first piece of an elaborate plan KWU officials have established to deal with COVID-19, one that effectively creates a campus bubble and includes numerous protocols.

“We’re keeping an eye on the KDHE rules and regulations, what states are being required to quarantine, we’re loading up on PPE (personal protective equipment) to make sure we have enough – we’re doing those types of things that we can control,” O’Connell said.

Communication is essential, O’Connell said. He will address students during the orientation process about the university’s protocols.

“We’re putting a course together that will help students understand hygiene and what is the best practice for hygiene – how to wash your hands properly and stuff like that,” he said. “Just giving them a little understanding of COVID and how it actually works – ‘why if I get a negative test do I still have to quarantine?’ Tell them that we do this because this is what evidence has shown us, this is how the virus works, this is what we’re doing to help you and the people you’re around.”

To ease fears, KWU personnel have contacted students by phone so they know what to expect when they arrive and how they’ll proceed.

Each student will be evaluated before checking in. While testing with nasal swabs won’t be done, they will undergo a screening.

O’Connell’s greatest concern, as with all health care professionals, is the asymptomatic carrier – someone who has the virus, isn’t showing symptoms, but can pass it on.

“That’s one of the trickiest parts of this whole thing,” he said. “While it would be great to test everyone, is it smart to test anyone? I don’t know.”

Once school starts O’Connell and his staff will focus on the daily care of KWU’s large number of student-athletes. Practices begin August 15 with the first competition date set for September 5.

The process starts with an NAIA-mandated PCR test – a comprehensive examination that must be given seven days before a student-athletes’ first competition.

“As long as they have a negative PCR test they can compete the rest of the year and don’t need to have that test done again,” O’Connell said.

Daily screenings will be done from then on and include temperature checks and asking if they have any symptoms or have been around anyone who has COVID-19.

A key component will be the care of students who contract the virus. They will be isolated at off-campus sites and under the care of the county health department until they are well. They won’t be alone, though.

“We are putting together a team of individuals at Kansas Wesleyan who will be checking with student-athletes and students in general to make sure we’re following up with them and let them know we haven’t forgotten about them and we’re worried about them and want to make sure that they are doing OK,” O’Connell said.

“As an employee of Kansas Wesleyan and person who cares about my students I’ll still be checking in with them every couple of days, too. Just make sure they’re OK, how their symptoms are checking, are they getting food, are they OK with classes.

O’Connell admits he thinks about getting sick.

“I have to be worried about myself,” he said. “Where I work and with my close proximity to a lot of students I have to be cautious of everything. That’s why I take extra precautions about wearing a mask, wearing the PPE, always washing my hands and using hand sanitizers. I have to take the proper procedures to make sure I protect not only myself, but everyone else I work with.”

“To me the ultimate thing is we have to keep up with what the CDC and WHO (World Health Organization) are saying and keeping those guidelines. Wearing the mask when you’re in public, keeping the six feet of separation when you can, continue using proper hygiene – washing hands, hand sanitizers. Doing those things.

O’Connell is a strong advocate for one protocol as a way to slow the spread COVID-19: “All know for sure if is if we wear masks we can, as the WHO said, put it close to dirt.”