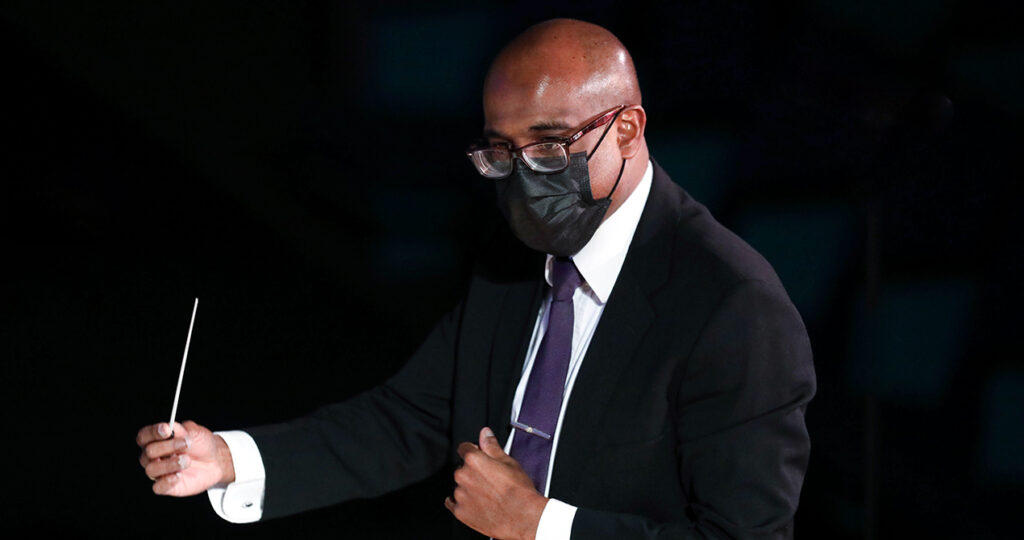 After years of conducting and performing within string orchestras, Dr. Leonardo Rosario provides his skill and expertise to student musicians at Kansas Wesleyan University, where he began as an assistant professor of Music, director of strings and conductor of the string orchestra in August 2020.

Rosario spent a combined 10 years performing and traveling internationally, as well as completing his doctorate at UNC Greensboro in 2015. Prior to teaching at a collegiate level, he toured South America with the Youth Orchestra of the Americas and the Minas Gerais Philharmonic Orchestra.

“I try to bring my worldview to the students,” he said. “Traveling opens up your eyes, and you see and understand things. That’s what I try to do in classrooms, get a broader view by using different materials, genres and cultures.”

Students under Rosario’s direction can expect to be introduced to an expansive repertoire of music, not just the traditional classical music commonly performed by American orchestras.

“I have the chance to build something unique,” he said, regarding his choice to begin teaching at KWU for the 2020-21 school year.

His background as both conductor and instrumentalist influences how Rosario approaches his new role.

“I understand how the orchestra works from the inside,” he said. “I had the opportunity to play in different sections and different positions.”

Despite the challenges posed by COVID-19, Rosario spoke with pride of the effort shown by the KWU string orchestra this school year.

“I think we’re blessed because many, many orchestras were not performing at all,” he said.

“I think it was an amazing year,” Rosario said. “They’re phrasing, playing together, articulating together. They’re sounding as one. That’s a huge victory, especially this year.”

In addition to expanding the size of the orchestra, Rosario said he knows exactly what he wants for the future of the string orchestra.

“What I wish for this group is for it to become a nationwide reference of quality, togetherness and diverse repertoire,” he said. “When others search for a good group to hear and learn a piece from, I want them to search for Kansas Wesleyan University.”

Dr. Rosario was born in Rio De Janeiro, Brazil, but grew up in a small town within São Paulo. His love of music developed when he attended church as a child. Every service, a man would play violin. Upon noticing his fascination with music, Rosario’s mother offered him the opportunity to take formal violin lessons at age 8.

As he grew up, continuing his music studies became a challenge. The first obstacle in Rosario’s way was the relocation of his original violin teacher.

“It was hard to find a new teacher,” he said. “Almost everything required us to travel.”

Then, Rosario had to go through a selective process to even get into one of São Paulo’s two prestigious universities.

When he entered post-secondary education, it was not as a musician. He said music was not seen as a viable vocational path in Brazil at the time. As a result, Rosario studied computer science for two-and-a-half years before returning to his musical roots.

“I’d spend the whole day programming in front of a computer, and thought ‘I don’t know that this is what I want to do for a living. Maybe music is my calling,’” Rosario said. “I loved the freedom of the artistry in music.”

Now, Rosario teaches that very artistry to students here in the Sunflower State.