Feature: Parker Marches to the Beat of Her Own Drum 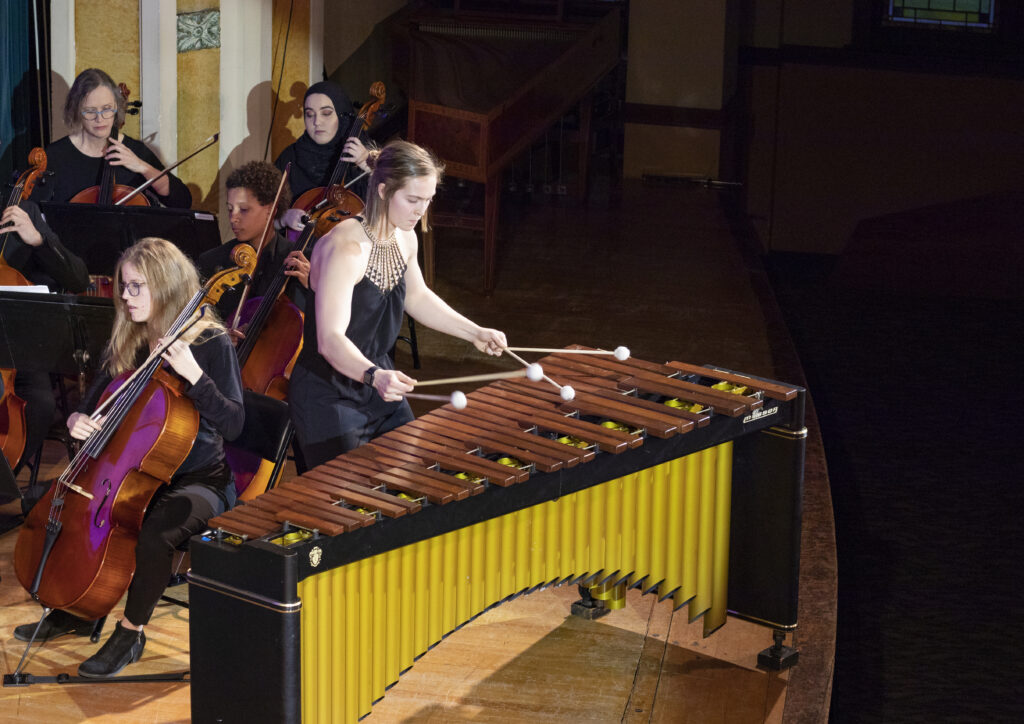 Home About News Feature: Parker Marches to the Beat of Her Own Drum

Robert Frost’s famous poem, The Road Not Taken, speaks of two paths and, as many know, Frost chooses the lesser-traveled path and speaks of that choice positively. For Kansas Wesleyan University music standout Morgan Parker, the road she chose was one of drive, dedication and a high level of focus, a road that few others have both the ability and desire to choose.

Parker grew up in the Salina area, and according to a well-informed source, loved music from a very early age.

“I always had to keep my pots, pans and wooden spoons on the bottom shelf when I was cooking,” said Morgan’s mother, Robyn Parker. “Morgan started playing the ‘kitchen drums’ at around 18 months.”

Those culinary musical skills turned into more later on, when Parker moved into local ensembles and became known in the community for her talent. When it came time to select a college, some things were uncertain for Parker, but unlike many high school seniors, her choice for further education was not.

“I had started playing in ensembles at KWU as a sophomore in high school, and knowing many people made my transition here really smooth,” Parker offered. “Those opportunities created great experiences, and those experiences made me want to come here.”

The divergent path for Parker did not arrive until the end of her freshman year’s spring semester. In the interim, she played in multiple ensembles and was heavily involved with the music program. She also participated in a year of competitive cheer, but at the end of that spring term, the divergence in the road rose up to meet her. That year, the music department’s collaboration with the Salina Community Theater was In the Heights by Lin-Manuel Miranda, and it changed Parker’s perspective.

“It was the hardest musical I’ve ever played,” said Parker. “It changed my outlook on music, because I connected with not just the story of the pieces, but how physically and mentally demanding it was. I never knew music could be like that, so draining, and yet so fulfilling. After three-and-a-half hours of playing music every night, I was just exhausted. Going through the six weeks of training and playing it for a few weeks, I just remember that work convincing me that I wanted to put all my effort into pursing music, and specifically, Broadway studies.”

With that, she knew what she wanted to do with her life and immersed herself fully in her music. The versatile Parker, who, in her words, “has played anything that you can hit or shake,” has been involved in virtually every music-related activity on campus the past three years. This football season, she moved into the lead role of KWU’s drumline during football games, and she has played or performed in virtually every musical group or arrangement the school has available.

“I got more experience my first year here playing than students at larger schools get in four years,” said the talented percussionist. “I have played so much between musicals, band, orchestra, choir, church and events. I’ve also had opportunities to teach in the community.”

What’s next for Parker? The Voices of Eve: An Evening of Women in Music performance Oct. 7, and that topic strikes a chord with Parker on multiple levels.

“I’m really excited about this concert, especially as a drummer,” exclaimed Parker. “I deal with perceptions of women in music at every performance, and to this day, I get surprised reactions when people learn I’m a drummer. Even my male students are surprised when they discover I’m female, which sometimes they don’t until they show up for a first lesson. That’s one reason why I love playing in the pit so much, because everyone expects the drummer to be male. When they lean over and see it’s a girl, I get compliments all the time, things like ‘Oh my gosh, it blows me away to see a girl playing the drums.’ That’s a big part of why I’m doing what I am, because I want to be a part of women playing percussion – and especially the drums – at the highest of levels.”

Those levels for Parker could only lead to one place.

“New York University has a Broadway emphasis program. That’s what you work on in your lessons and your practical work, and the school links its program with Broadway, which is just down the street. I had a lesson there in February,” explained Parker. “The head of that department was very interested, and in fact, said I would have made it if my audition had been that day. I’ve done nothing but take the advice he gave me that day and worked even harder. I believe I have a strong chance, but there are still a lot of steps remaining before I find out if I’ve been accepted.”

Regardless of where the next road leads, Parker is sure to proceed with persistence and hard work she learned from her experiences at Kansas Wesleyan.