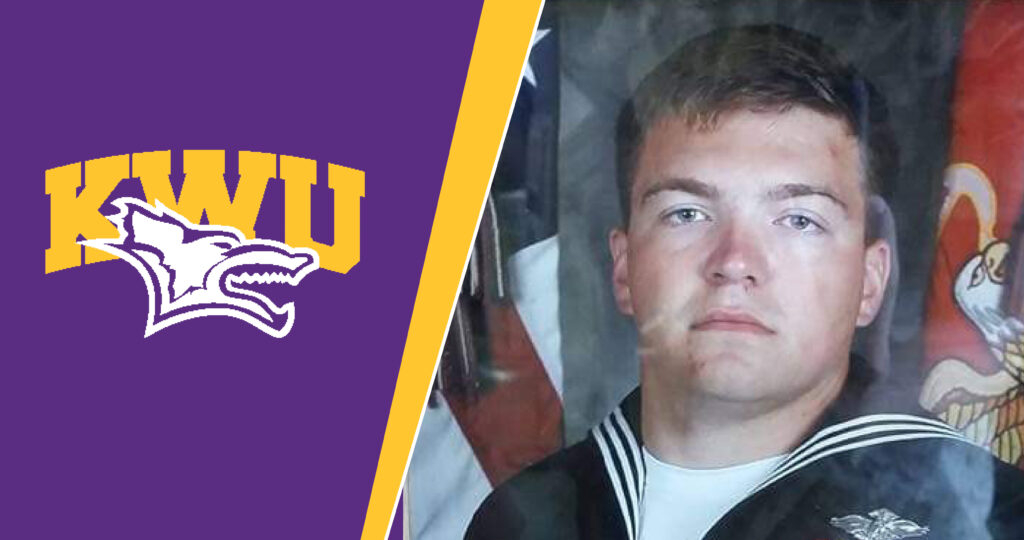 “We put theory into practice.”

It is the mantra of Kansas Wesleyan University’s nationally-ranked Emergency Management program. As the only undergraduate major in the discipline in the state, students stepping into Peters Science Hall receive hands-on education and training from professors who possess a wealth of field knowledge and experience.

“If you put it in a military or law enforcement term, we have been downrange,” Dr. Lonnie Booker, KWU’s director of Emergency Management, stated. “We have served as an emergency manager in the community or we have been police officers or police personnel in some capacity.”

This past May, KWU’s group of Emergency Management graduates included a non-traditional student, who spent several years putting theory into practice before returning to his hometown of Salina and earning his degree.

Drew Pilgrim ’20 served nearly six years as a Navy corpsman, providing medical care and training for Marines stationed in Camp Pendleton, California. After concluding his military tenure in 2017, Pilgrim enrolled at KWU the following year. The decision to major in Emergency Management made perfect sense to him.

“I feel like I respond really well when it comes to being under pressure and making critical decisions,” Pilgrim said. “I knew had done it for the six years I was in [the Navy]. And I just felt comfortable with something that was structured.”

Kieshawn Rattana, a Marine who served in the same helicopter squadron as Pilgrim, attests to the latter’s ability to respond with poise in critical or potentially life-threatening situations. He also points to an even greater character trait of Pilgrim’s.

“He was very caring – a strong quality amongst other Navy [medics],” Rattana noted. “I thought Drew took the time to know every single one of us and [let us know] we are his Marines.”

As a corpsman, Pilgrim saw and experienced situations his classmates had yet to imagine. Training exercises involving unforeseen accidents forced him to unexpectedly put his skills to use at times. When not applying tourniquets to injured Marines, he was instructing them on how to provide self-care in the event a corpsman was absent from the field. So when Pilgrim decided to bolster his education, it was beneficial not only for him, but for his classmates, as well.

“Drew was a leader in the classroom,” Booker commented. “He was able to bring a lot of information and real-world experiences to the classroom and open the eyes of the traditional-aged students.”

Within the walls of Peters Science Hall, students have access to a large designated area where they can perform live-action scenarios, including with members of Salina’s fire and police departments. In addition, students are tasked with developing their own emergency operation plans while consistently utilizing problem-based learning.

“Any of those crises or emergencies that you see on TV, they have direct connection to what we do in emergency management,” Booker noted. “Within the program, we give students the foundational pieces. We don’t teach them ‘if this happens, turn to page 500 and this is going to tell you A, B, C and D of what to do.’ That’s not how emergency management works.”

Booker added, “We are not only going over concepts in the book, but we are placing those concepts into reality.”

The professor knows what awaits students who complete the program and step out into the real world. With over 15 years of law enforcement experience, Booker served on various specialized units, including the S.W.A.T. team. As a detective, he worked criminal investigations and undercover narcotic cases.

During Pilgrim’s pursuit of his bachelor’s degree, he admired Booker not only as his professor, but a person who had walked a similar path. When the two talked about Pilgrim’s future plans, Booker gave his student clear and concise counsel.

Pilgrim’s passion is to help others within his community. His current role as a milieu manager at KVC Hospitals in Hays allows him to work with children and teenagers suffering from psychiatric and behavioral disorders.

“As milieu managers, we’re there to teach the staff and also teach the kids what is acceptable while they are here, and how they can take that home and hopefully be contributing members of society rather than in and out of facilities,” Pilgrim stated. “Sometimes you are going run into that [situation] where people are in and out of facilities rather than being successful, but we’re going to give 100 percent for each kid that comes through.”

The former Navy corpsman points to the fact that working with children and teenagers is much different than interacting with Marines, but his current role gives him a chance to exhibit a greater degree of patience. He recognizes the children he interacts with each have different backgrounds and experiences, but that does not stop him from looking for ways to be a positive influence.

“It’s all about picking the right battles and deciding when is a good time for it to be a teaching moment,” he said.

Pilgrim plans to begin a master’s degree program in the spring. From there, he hopes to land a position as an assistant emergency manager before one day stepping into a director position. In the meantime, he continues to follow his passion and better his community by teaching and caring for others.