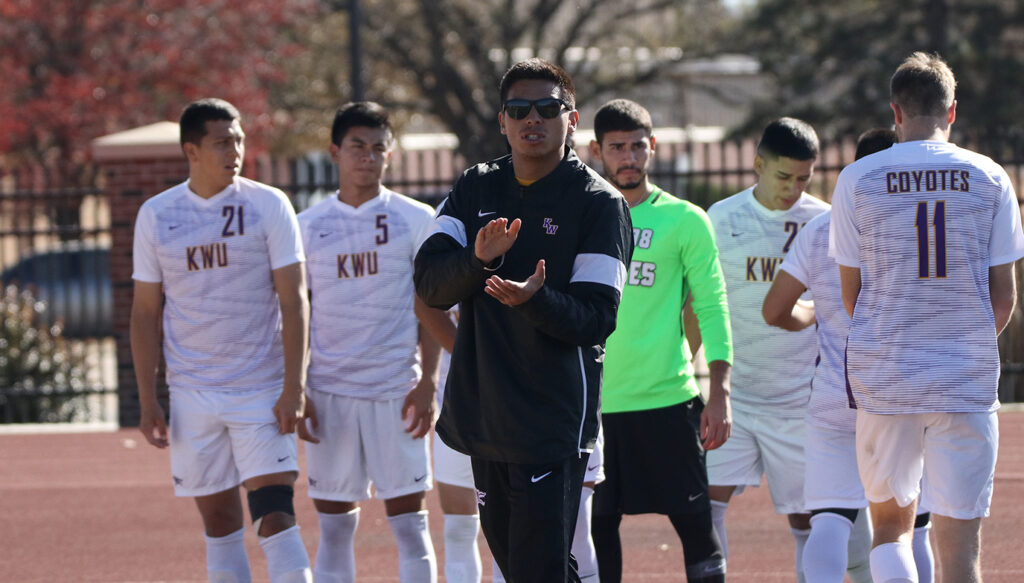 The advice Miguel Prieto received from his family as a youngster in Mammoth Lakes, Calif., was always the same.

“Growing up I would always here from my uncles and family members say ‘get your education, don’t be like us, you have the opportunity to do better,’” Prieto said. “I always had my parents’ and sisters’ support, they always pushed me to do well, both on the field and in the classroom.

“They’d tell me you have to get your education, education comes first. Soccer should always be that cherry on top.”

Today, Prieto is still learning as a graduate student working toward a master’s degree in Business Administration at Kansas Wesleyan University.

And there’s still the soccer ‘cherry’ involved. Prieto is the first-year men’s coach at KWU.

The promotion represents a level of involvement he couldn’t have envisioned a year ago and is a dramatic reversal from where he thought his life might be heading three years ago.

Following a two-year playing career at Lake Tahoe Community College in South Lake Tahoe, Calif., Prieto was prepared to enter the workforce. He graduated from high school in Mammoth Lakes, Calif., in 2013 and spent one year at Orange Coast College in Costa Mesa, Calif., but it didn’t go well.

Still wanting to play soccer and continue his education, Prieto decided to join the new program at Lake Tahoe for what he thought was his final academic stop. That was before Juan Maldonado, a KWU graduate, former Coyote player and close friend from Mammoth Lakes, contacted him about transferring.

“He reached out and said why not come out here for a visit and stay with me and I can get you settled,” Prieto said of Maldonado, who teaches and coaches soccer at Salina South High School.

The trip to Salina included a significant unknown. KWU was between coaches, but Prieto wasn’t fazed.

“(Maldonado) took good care of me and I had a great time,” he said of his visit. “It was the culture that was established there, the guys made it feel welcoming and I was able to speak English and Spanish. Spanish was really comfortable for me.

“After the weekend I knew I was going to sign at Kansas Wesleyan. I still went to Saint Mary and went through the whole visit and stuff, but I had my mind set on Kansas Wesleyan.”

As a player, Prieto was a team captain and earned Second Team All-Kansas Conference honors as a midfielder in 2018, his senior season. He helped the Coyotes win the KCAC championship, compile a 17-5 record and gain a berth in the NAIA National Championship Opening Round.

In the classroom he earned a spot of the Dean’s Honor Roll in the spring of 2019.

When KWU was looking for a new coach last fall, Prieto helped with the search for a new coach in the early stages – the thought of applying for the job himself on the back burner.

Several weeks after the search began Prieto finally decided to apply, but the decision wasn’t made in haste.

“In the beginning my mom (Rosa) was a little more nervous than me,” he said. “My dad (Miguel) was like ‘it’s an opportunity and you can learn many great things, it will be a good stepping stone for you and take what you can from it. You’ll learn from it and grow and take advantage of the opportunity.’

“I thought about it real, real hard. It took me a while. Some people said ‘yeah, you have our support’ and other were a little edgy about it.”

Ultimately, Prieto was swayed by a desire to help the returning Coyote players on the field and, more intentionally, away from it. He was named the new head coach in February.

“His top goal when we were talking through the interview process was the academic performance with that program,” KWU Director of Athletics Steve Wilson said. “He was the academic leader when he was a player. He did a good job when he was the assistant coach of being a great academic mentor moving forward for the current players.

The decision to come to Salina was the easy part. Succeeding in a wholly new environment some 1,500 miles from home was something else.

Prieto immediately found plenty of support, though. He effectively had two sets of host parents – Scott and Annie Boswell, and Jack and Donna Lennon, whose son Jesse played for KWU and Salina Central High.

“They were always there for us,” he said. “When we needed something they’d reach out to us and just motivate us, come to the games and wait for us after games and hug us and tell us we did job, even when we lost. It was great to have their support and have them be there for us.”

Annie Boswell, Campus Ministry Leader at KWU, was impressed with Prieto’s relentless approach to balancing academics and soccer. But it was his work away from the soccer field and classroom that left a lasting impression. She was particularly impressed with his compassion and concern for his teammates.

“The thing that really captivated me about Miguel is it did not matter how tired he was from being a full-time soccer player, a full-time student – there were times during the year that he would have two jobs – he would always be such a mentor to other Hispanic students within the team,” she said. “They were primarily from California and were facing some of those same challenges that Miguel had at some point being a first-generation college student.

“Miguel was the type of player that would seek out people that didn’t have a car and would take them to work, he would go to work himself, then he would go pick them up and take them home. He would help them study, he would make sure that they’re not falling behind either in soccer or academics or life.”

Wilson said the decision to promote Prieto was easy after talking to several team members.

“They want to play for this guy and it was exciting to see that,” he said. “What I heard from some of the leaders on that team was that there’s a high level of comfort with Miguel, but it’s not a comfort that I’m being coached by my buddy.

“It’s ‘I’m being coached by somebody who can lead me, I know this person well enough to be able to have a connection with already.’ He’s able to relate to these guys on a lot of levels.”

Boswell believes Prieto will do well leading the team.

“Obviously, there’s new challenges and a change in responsibilities and stuff,” she said, “but his desire to empower kids and mentor kids on and off the field is, at the end of the day, what college sports are about.

“I’ve been working with the soccer team for about six years and it was really interesting to hear some of my soccer players when they knew that Miguel was interviewing for the head coaching position. A lot of them said ‘he had an impact in my life that I’m never going to forget and not just on the field, but off the field.’ That’s hard to find.”

Prieto credits those who coached the program before him and his California home town.

“I’m thankful to be part of an amazing coaching tree that has established a unique culture at KWU,” he said. “The (Mammoth Lakes) community was helpful and was always behind us. They just showed us a lot of support.”

Prieto’s message to his new team, which will open its season in the coming days, has and will be familiar and consistent.

“Soccer’s one thing, but soccer’s not going to be there forever,” he said. “I want these guys to graduate and receive that diploma for their families because, personally, there’s no better feeling than getting that diploma and walking across that stage and your family being there with you.”