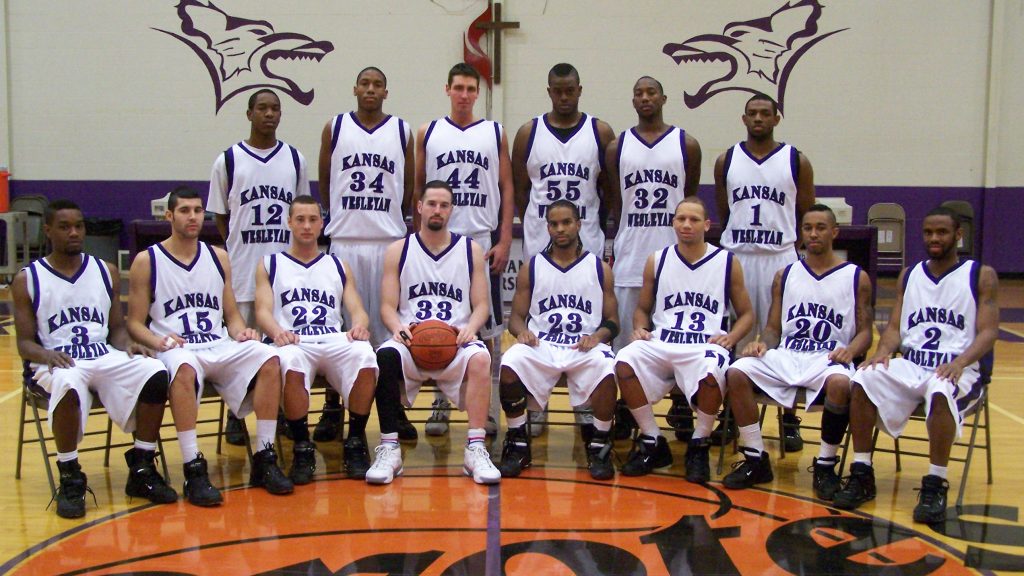 Editor’s Note: The profile below begins a series on 2022 inductees to the Kansas Wesleyan University Athletic Hall of Fame. Profiles are currently scheduled to run each Wednesday through August 24. The ceremony is set for the Saturday of Homecoming and Family Weekend 2022, Oct. 22 at 8:30 a.m. Tickets can be purchased at https://kwu.vbotickets.com/eventdate/KWU_Hall_of_Fame_Induction_Ceremony/295132.

Tommy DeSalme was not happy with his Kansas Wesleyan Coyote basketball team.

Granted, it was early in the 2006-07 season and the vast majority of the schedule was ahead of them. But DeSalme didn’t like what he saw during a practice session Dec. 1, 2006, the night before the Coyotes’ game against defending Kansas Conference champion Southwestern.

“We were practicing and I mean it was a come-to-Jesus practice and I challenged them that night,” said DeSalme, who was in his first season at KWU. “I said, ‘You guys can be the best KCAC team ever, by far, or you can be 13-5 and just skate by.’ I was so angry at them for being just kind of ho-hum about how good they can be and I kept challenging them.”

His players sensed the frustration and responded in dazzling fashion.

“We were in there running, and finally they all got mad at me and they kind of joined together,” DeSalme said. “From that point on we lost one conference game. They were an incredible group of young men.”

That “incredible group” walloped Southwestern 79-54 the following night and never looked back. KWU won 22 of its next 23 games, finishing 28-4 overall and 17-1 in the KCAC – the 28 wins a school record. The Coyotes won the KCAC Tournament in dramatic fashion, downing Friends 56-55 in the championship before a capacity crowd inside Muir Gymnasium.

Wesleyan defeated Bluefield College (Va.) in the NAIA national tournament before losing to Northwestern (Iowa) in the second round – the loss ending a 19-game winning streak.

The 2006-07 team, arguably the best in KWU history, will be inducted into the Coyote Athletic Hall of Fame on Oct. 22 during ceremonies, fittingly, inside Muir Gym as part of Homecoming 2022.

Marcus Faubion, a senior guard/forward who was named the KCAC Player of the Year that year, remembers the practice.

“It’s good to stay humble, and the message was received,” he said. “We kept thinking about success and wanted to get better every day.”

DeSalme came to Salina after coaching at Sterling College and promptly resurrected the program.

“It was one extremely talented team that (coach) Jerry (Jones) had left behind when he retired,” DeSalme said. “A big group of those guys was coming back and we had some pretty high-level dudes with Anthony (Smith) and Jeff Baron and Marcus.

“After (Assistant coach) Donnie (Jackson) and I got there, the first player that we added in that first recruiting class was (point guard) Tony Boone, who to this day is the fastest point guard I’ve ever been around and athletic as all get out.”

DeSalme bolstered the depth with the addition of three players he was familiar with – Josh Berry and Cameron Jackson from Sterling and Trey Sims, a highly sought guard out of Tulsa.

“We were doing some individual work, especially with Marcus and Jeff Baron (in October) and I saw the competitive streak in both of them and that’s all I really wanted to see,” DeSalme said. “Anthony was the leading scorer in the league the year before I got there and he was just so gifted.

“It just took it a little time to get those guys who knew me to blend in with the returning guys and make it their own team.”

DeSalme, who’s in his second season as coach at Hutchinson Community College, had one iron-clad rule – play defense or watch from the bench. He installed a man-to-man scheme but it took the team some time to adjust after playing zone defense previously.

“We were a great man-to-man team that year, once they learned it,” DeSalme said, “just getting them to buy in defensively.”

Smith said it was a complete team.

“The combination of offense plus adding in DeSalme’s defensive mind allowed us to see the success that we did,” he said. “We meshed very well, we utilized each others’ strengths and we built on those.”

“When your toughest guy is your most talented guy and your most competitive guy, you’ve got something,” DeSalme said of Faubion. “We played him at a four, he was the point guard, he was everything. He’s still one of the best players I’ve ever been around.”

DeSalme vividly remembers the game against Friends for the KCAC title. The Falcons were the lone team to beat KWU during the regular season and the title game was a defensive struggle.

Trailing 55-54 with seconds left, DeSalme drew up a play but Friends had a defensive answer. Working for a final shot the Falcons knocked the ball into the backcourt and a mad scramble ensued.

Sims retrieved the loose ball and passed it to Faubion, who was near the basket on the left side. He drove in, bumping into a defender in the process, and put up an errant shot.

Smith rebounded but his follow shot was blocked off the backboard, the ball careening to Sims on the left wing. Sims grabbed it with his back to the basket, turned and put up the game-winner as time expired. A wild on-court celebration ensued.

“Trey took that thing and faded away, buried it, and fell right into my lap,” DeSalme said. “There’s no reason we should have won, but we found a way on a night where it was such an ugly game between two legit defensive teams. It was a crazy night.”

Faubion said he might have committed an offensive foul on the play.

“It was a great defensive play, I will say that, but I’m not going to say it was a charge,” he said, with a laugh. “When Anthony missed that, I thought that was it. Fortunately, it went to Trey and he was a pretty clutch guy. I couldn’t believe it went in.”

“The focus and determination of the team, we weren’t going to let that game slip away from us and that’s what happened,” Smith said.

Faubion, Smith, Baron and Sims were named First Team All-KCAC while Berry was honorable mention, Henry Rogers was named to the All-Freshman Team and DeSalme was Coach of the Year.

“I think it was just the chemistry from the guys,” Faubion said. “We wanted to win and worked really well together and we all had the same goal. It’s good knowing all the hard work we put in together led to something pretty special.”

“There’s been a lot of great teams in the KCAC after I left it and before, but I think it’s the best team I’ve seen since I started in that league,” he said. “That combination of talent and depth and what they did to go through that gauntlet 20-1 including in the tournament, it’s well deserved. Those players took me on a heck of a ride, and what I’m most proud of is they were all great kids.”