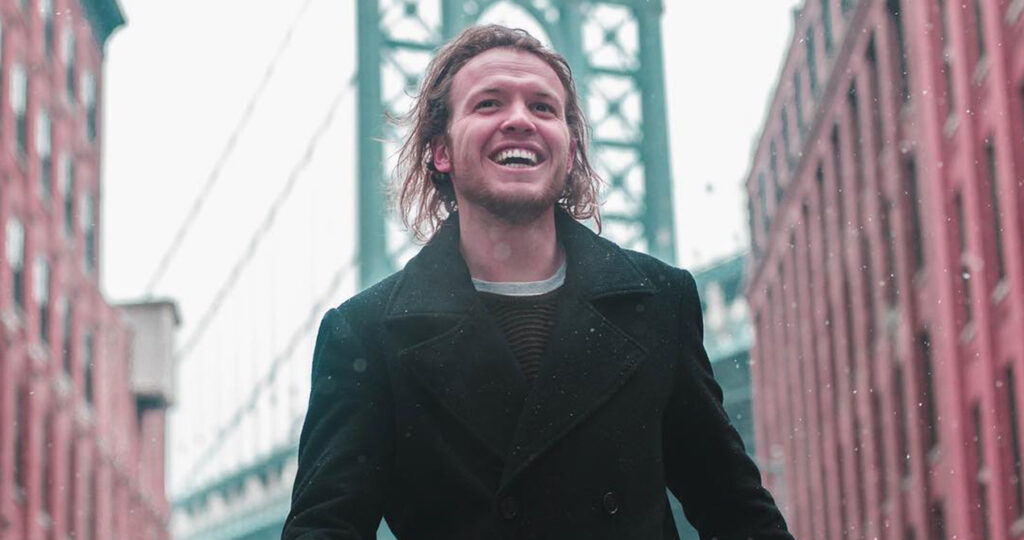 Franco Rivas has traveled the world in his pursuit of becoming a better videographer.

Rivas, a native of La Calera, Argentina, first came to KWU in 2014 to play soccer for two years (2014 and 2015), graduating in 2015. Since leaving Salina he has lived and worked in Australia, Spain, England and Argentina.

Each stay, though, was punctuated by a return trip to Salina. He’s back again, this time for two years as he pursues a Master’s degree in Business Administration. He’s also working as a graduate assistant in the university’s Marketing and Communications office as a videographer.

“I’ve been traveling for seven years and I’ve learned the most from people,” Rivas said. “People ask me all the time ‘why are you coming back to Kansas?’ People have the mentality that if you’re not in a big city, what are you doing? I’ve learned so much from people here in Kansas, I always felt that I need to come back to learn a bit more from them.”

This second stint hasn’t been without obstacles, though – all related to the COVID-19 pandemic.

2020 began with Rivas residing in Barcelona, Spain, with two friends producing a newsletter, Weekly.gg, that focuses on Esports video gaming, which Rivas was introduced to while at KWU.

A desire to return to the U.S. was intensifying, but he wasn’t sure how to do it. During a trip to Salina in December to visit friends and his former KWU host family, Annie and Scott Boswell, Rivas learned the MBA program might provide a way back.

“I wasn’t planning on doing an MBA, to be honest, I wanted something more related to video and artistic part of things,” he said. “But I’ve always been involved with business and creative stuff and I think this will be helpful.”

Rivas applied, was accepted and planned to move in March. Things got complicated, though, when the pandemic hit Spain with a vengeance.

He went back to Argentina for a brief visit before returning to Barcelona to gathering his belongings. With infections and deaths rapidly increasing, Rivas was able to get a seat on the last flight out of Barcelona before the government shut down the country.

“If I’d missed that plane I’d still be there,” he said.

The adventure didn’t end with his arrival in Kansas. Having been in Spain, Rivas was required to go into quarantine for 15 days and did so at the Boswell’s house.

“For me it was an absolute no-brainer,” Annie Boswell said. “I told (KWU officials) that we were going to make sure he was safe and was taken care of. He was not a burden whatsoever.”

“They checked on my temperature twice a day just in case,” Rivas said.

He stayed in a basement apartment, separate from the rest of the family, which also went into quarantine after being exposed to him.

“It’s one of those things where someday my kids are going to be gone and I pray it would happen to one of my sons,” Boswell said. “If they were across the world I would hope that someone would step up and take them under their wing like one of their own.

“He’s from Argentina, he has been all around the world and yet he’s still interested in relating to our culture, to our community, to our city. So even though he’s been coming back off and on for a few years, he already had deep ties for the community, both for soccer and Kansas Wesleyan.”

Cleared from quarantine, Rivas was ready to start at KWU, but the virus waylaid his plans once again.

“I said ‘now I can go back on campus,’ but the day after that the campus closed for 30 days,” Rivas said.

The closure was extended for the remainder of the spring semester. Rivas and his camera, though, have had plenty to do, ironically thanks to COVID-19.

His first task was producing a virtual tour of campus that’s used in student recruitment, the video available on the university’s website, www.kwu.edu.

“We went through most of the buildings, filmed them and gave an explanation of each so people can see more of it than going through photos,” he said.

Next up is a series of videos featuring faculty and administrators discussing what life with COVID-19 will look like once school resumes, a commercial video promoting KWU and eventually working with the athletic department in the fall.

“I’m focusing on videography during two years at Kansas Wesleyan, really push it out and learn more about it,” he said.

Learning videography has occupied much of Rivas’ time since graduation.

His first international stop was Australia, where he worked one semester as a soccer coach and budding freelance videographer and designer.

He returned to Argentina from Australia and learned of a course at an academy in Barcelona that taught coding and design for websites, which also interested him.

He was accepted and spent four months in Spain as a student and teacher before heading to England in May, 2018.

Enthralled with what he’d seen of Esports at KWU, Rivas applied for a web designer job with Fnatic, a global Esports entertainment company that’s deals in competitive video gaming and gear with headquarters in London.

“Fnatic is like the Chiefs in football, the best out there,” Rivas said. “It was the best job I’ve ever had, honestly.

“I worked with general graphic designs and marketing assets. I worked on the release of new clothing and assets for social media to promote their clothing. Same with their teams or local London pages.”

Rivas told the company of his love for videography and ultimately was given an opportunity to show his stuff.

“I went to events with them to film and take photos,” he said.

Rivas grew weary of London’s massive size and weather, though, and returned to Barcelona to produce the newsletter with his friends in April, 2019.

His videography skills continue to improve through self-instruction.

“I’m far away from perfecting it, I’m still learning a lot and I’m going to keep learning as much as I can,” he said. “I’ve never studied it. Since I was a kid I would try to learn by myself.

“I follow a bunch of people that were high up in rank as designers, take their work and copy what they do, then try to change it to my style and integrate from that. I’m always trying to learn.”

Rivas’ career goal is to combine videography and sports, and he knows where he wants to work and work for.

“It might sound crazy, but as soon as I finish the MBA I’m going to the Kansas City Chiefs and see what’s up,” he said. “I love the Chiefs and would love to work with them. We’ll see.”

Rivas says Salina and KWU will remain part of the equation.

“I know I’m going to move once my Master’s is done, but I will always come back to visit,” he said. “I put my host family really high up in my life right now. They opened their doors to me in terms of support when they knew nothing about me. I’m a family guy, all Argentines are. They did a lot for me.”