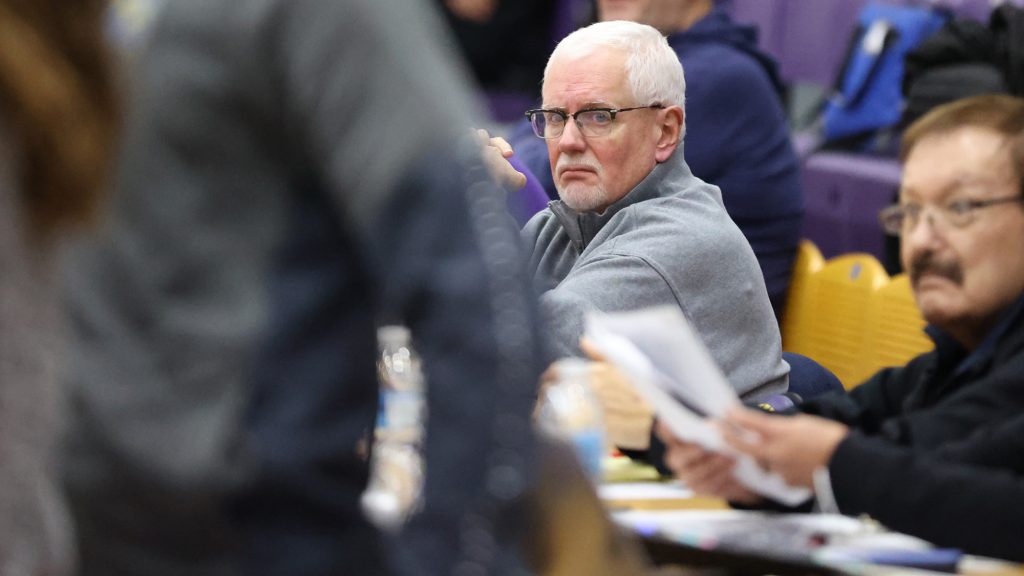 Bob Davidson did not want to become a writer while growing up. The son of a dentist and a librarian in Parsons, Kan., he wasn’t even particularly fond of reading.

But now, Bob Davidson is a living, breathing and walking historian of Kansas Wesleyan sports, having covered the university for the Salina Journal for 23 years before becoming a special correspondent for the Coyote Sports Network in October 2018.

“I have a face for radio and a voice for silent movies,” Davidson said in his self-deprecating way. “I was actually in a radio curriculum at Wichita State, but I got into that and quickly found out that radio was not for me.”

Instead, he found his calling as a writer.

He turned out to be good. Real good. So good, in fact, that Kansas Wesleyan appreciated his hard work, dedication to his craft and coverage of Coyote athletics enough to induct him into its Athletic Hall of Fame in 2017.

To know Bob Davidson, you have to understand how he got to Salina and why he stayed for so long.

“I was more of a stat guy,” Davidson said of his introduction to sports. “I loved to keep the book. It was fascinating, and I fell in love with that part of it.

“I don’t know when I decided I wanted to become a writer; it was sometime in college.”

Graduating from Wichita State in 1978, his first job was with the Leavenworth Times in Leavenworth, Kan., where he could see Leavenworth Penitentiary from his balcony each night when he went home. The lessons he learned from his boss and editor, Steve Sigafoose, would carry him for a lifetime.

“He literally taught me how to be a sports writer,” Davidson said. “It was 10 months of seven days a week, and it was intensive. He taught me what to do and worked my tail off. I just fell in love with it and took off from there.”

Jobs in different towns and cities of various sizes followed his stint in Leavenworth. There was Hays and Kansas City, Vicksburg, Miss. and Clarksville, Tenn. Then there was the Hutchinson News for seven years before a spot opened up in Salina, and his wife, Tama, said it was time to settle down.

“I enjoy telling stories and communicating with people through writing,” Davidson said. “I have found that people still enjoy the features, the personality stories. People like to read about their classmates, their fellow Coyotes.”

Erik Bonar, who spent 17 years working for Davidson at the Journal, is quick to sing his praises, not only for his writing ability but also for him as a manager and as a person.

“Bob is really bright, and he can really articulate what it means to be a part of that working group. He’s an asset for any company he would want to work for,” Bonar said. “He is probably one of the best bosses I’ve ever had. His philosophy was you hire good people, and you let them do what they do, and you trust them to get the job done. When you came to work with Bob, it didn’t feel like a job; it was something you wanted to do.”

23 Years at the Journal

Davidson saw a lot of things during his time with the local newspaper, but none was more awe-inspiring than the transformation of KWU sports.

“It would be like going from the darkest of the night to the brightest of day,” Davidson said. “When I got here, they didn’t put much emphasis on athletics, and then they grew and poured more money into it. That made the job a lot more fun. Covering teams that are successful is a lot more fun than teams that aren’t.”

When Davidson started covering KWU basketball, the basketball teams played in Muir Gym, with seating on only one side that was never filled near capacity. Across the street there was Martin Stadium, “where the turf was like a feedlot, and I’ve seen better feedlots.”

Now the basketball team plays in 1,500-seat Mabee Arena and the football and soccer teams on Gene Bissell Field at the Graves Family Sports Complex.

“Athletics are important in the realm that it is part of the education system,” Davidson said. “There’s very, very few people from Wesleyan or the KCAC (Kansas Collegiate Athletic Conference) or even NAIA who get to the pros.

“Wesleyan cares so much about the individual student. They try to set them up to be as successful as they can be once they leave here.”

Davidson has seen a lot of games and matches during his time in Salina, but two teams stand out for their memorable runs.

The 2006-07 men’s basketball team, which qualified for the NAIA Tournament, is the first to come to mind.

“Those athletes and that coach; that team was so special,” Davidson said. “That whole season, poor old Muir Gym, they were dragging in extra seats. They won the conference tournament on a miracle play. That’s the only time I’ve seen the court stormed at Kansas Wesleyan. And then going to Branson for the national tournament, that was so special.”

Then there was Matt Drinkall’s 2018 football team, which played in the NAIA semifinals.

“We just kept winning playoff games,” Davidson said. “The teams seeded above us kept losing, and we just kept getting home games. We won the first two playoff games before being eliminated by Benedictine. That was a really special team.”

A KWU Hall of Famer

Davidson officially became a permanent fixture in KWU history when he was inducted into the Kansas Wesleyan Coyote Athletic Hall of Fame on Oct. 7, 2017.

“That caught me by surprise,” Davidson said. “I was just doing my job; I was supposed to cover Kansas Wesleyan. When I heard I was going to be inducted, it was stunning and mentally humbling because you are just doing your job. It was something I didn’t expect, but I am deeply appreciative and grateful.”

In 23 years with the Journal and now four on campus, Davidson has covered just about every sport that KWU has sponsored, both men’s and women’s. In 2018, he was named the Kansas Sportswriter of the Year by the National Sports Media Association and Hall of Fame.

“I love football and I love basketball,” Davidson said, “but, actually, I’ve gotten to a point where I look forward to covering each season. Since I’ve gotten here, I’ve really enjoyed covering volleyball. I didn’t know anything about soccer. I’ve come to appreciate that sport, too, because Wesleyan has become very good at soccer. Softball, too, I enjoy covering, and I appreciate the skill and the work that those people put in.”

“For the longest time, Bob went above and beyond in his coverage of the Wesleyan sports teams,” Bonar said. “He always made sure that Wesleyan had a strong presence in the Journal.”