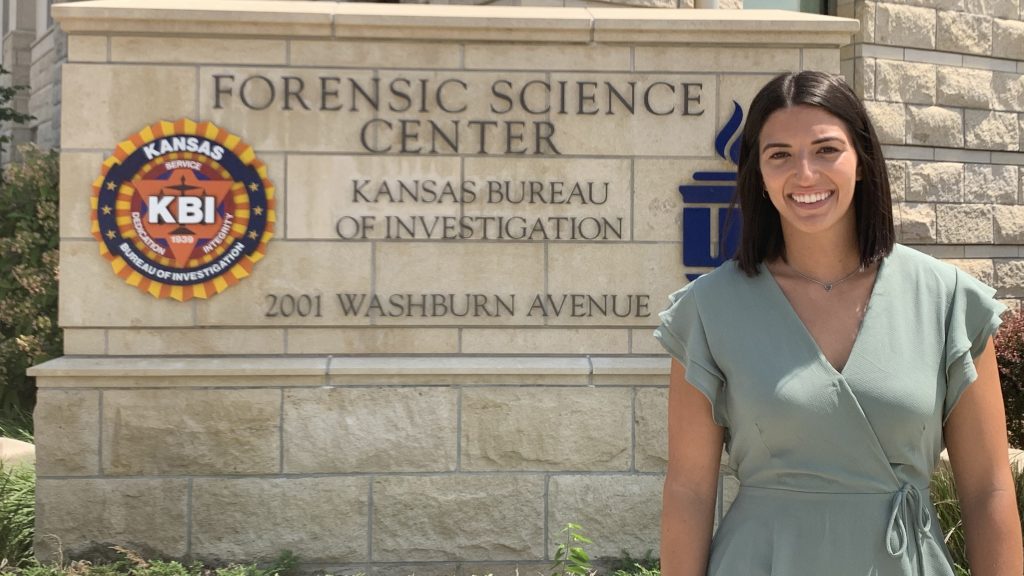 Editor’s Note: This story originally appeared in the Fall 2022 Contact magazine, and is being republished at this time to honor those participating in Dec. 16’s Fall Graduation Recognition Ceremony.

Spending the summer testing various bodily fluids for foreign substances would not be most people’s idea of an ideal internship. For Cortney Hanna, however, it fit right into her plans.

“It’s a good mix of consistency and surprises,” she said. “You’re doing the same processes every day, but it’s a different case, a different matrix, blood or urine. You never know what you’re going to find. It’s not too monotonous, but it’s not just like all over the place.”

The $30,000 gas chromatography-mass spectrometry machine she ran most blood samples on “was amazing to work with,” Hanna said.

She used the GCMS almost every day, under supervision, but also worked with a liquid chromatography-mass spectrometry machine.

It was a busy summer, 20-25 hours a week, 180 hours over the eight weeks, Hanna said. Besides doing the testing and gaining authorization, each of the interns had a research project.

“My project was working to determine the level of detection on the GCMS for the top 50 percent of controlled drugs of 2021,” Hanna said. “I was trying to prove how sensitive their instruments are, to prove that yes, our results are what they say they are.”

She was able to prove the machines can detect as little as 1 percent of a drug in a person’s blood.

The top drugs included some opioids, depressants and anti-depressants. Results detecting meth and crack cocaine laced with fentanyl also came in, she said.

She has a better understanding of the entire forensic science process.

“I got to watch toxicologists testify in court,” Hanna said. “You get to see a case from beginning to end.”

Competition was stiff for the internship. At least 20 others applied for the unpaid internship. Hanna worked in the toxicology lab, three others worked in firearms, digital evidence, and biology DNA amplification and sexual assault.

Hanna, from Lawrence, was able to live at home.

Applicants were screened as strictly as if they had applied for a job as an agent.

Hanna thinks her Kansas Wesleyan education gave her an edge.

Hanna is graduating early, in December, and planning to go on to graduate school in Chemistry or Forensic Science next year.

Many of her fellow Biomedical Chemistry majors hope to go to med school, but Hanna knew that wasn’t for her.

“I always wanted to help people, the same as doctors, but I just can’t do surgery, can’t stick people with needles. That’s just not my cup of tea,” she said.

Hanna realized that it was her lab classes she enjoyed.

“That’s my favorite part of the day, doing hands-on stuff,” she said. “I would say, if you don’t know if you want to go to med school, do something where you’re in the lab. It will open up doors. You don’t have to go to med school to be successful in health science and chemistry. There are other options.”