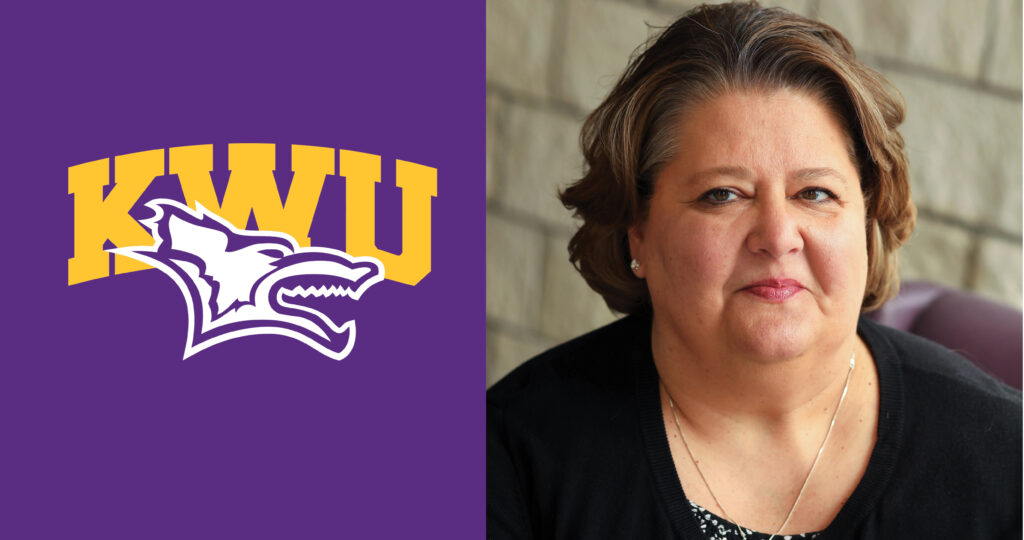 As a young girl, Kathy Sweeney ’05 always knew she wanted to be a nurse.

The notion was reinforced whenever she visited her pediatrician’s office, Dr. Oliver Martin and Dr. William Null.

“I always knew that was my calling,” the Salina native said. “I would be a nurse. I just knew that. It was all I ever talked about. I would play with my dolls and give them shots or do surgery.”

Sweeney joined the KWU nursing faculty in 2015 as an Assistant Professor of Nursing Education, following a decade of teaching nursing at Brown Mackie College.

The 2019 announcement that the Kansas Wesleyan Nursing program would be gifted the former office of Dr. Martin and Dr. Null, in order to build the Nursing Education Center was emotional.

“I was excited to hear that we were going to have this building and that it would be resurrected,” she said. “I kept thinking, ‘How are they going to do that?’ because I remember how it looked when it was a doctor’s office. My office is where some of the exam rooms used to be.

“The way they’ve been able to transition this building from what it was into this state-of-the-art facility is amazing.”

In addition to academic space, the building also houses memorabilia from the Asbury School of Nursing and Kansas Wesleyan’s nursing program.

She attended KWU from 1981-82 for her nursing prerequisites. Sweeney graduated from Asbury School of Nursing with a diploma in nursing in 1984, four years before Asbury closed and the nursing program was moved to KWU.

Sweeney’s nursing career began when she was 13 years old, working as a candy striper at Asbury Hospital.

“I passed water to patients, passed out newspapers, passed meal trays … anything I could do to be involved in nursing,” she said.

Upon graduating as a nurse from Asbury, she worked full-time as a nurse at the hospital three years. Other nursing experiences include working for a physician and at the Saline County Health Department for 15 years. During her tenure health department, Dr. Null was the health officer at the department.

“Not only did I have a relationship with him as a child, but as an adult, I got to know him very well,” Sweeney said. “As a child, he’d always put his arms around me, give me a big hug and say, ‘Thank you Jesus for this one.’ So to be back in this building means a lot to me. We’ll be able to teach the future of nursing in this building and serve the area.”

“There is an on-going need for well-trained nurses, both at our local hospital and in the community and region, as a whole,” said Tom Martin, executive director of the Salina Regional Health Foundation.

In addition to his work with the foundation, Martin is also the son of the late Dr. Oliver Martin, who practiced in the building. He helped facilitate the donation of the office where Dr. Martin, Dr. Null and Dr. Maxwell worked to KWU.

“My father had high appreciation for nurses and the important role they play, in partnering with physicians, in working to improve the comfort, health and wellness of patients,” Martin said. “The physicians in the Salina Clinic, including my dad, were actively involved with Kansas Wesleyan in a variety of ways. They believed in the school and its important mission.”