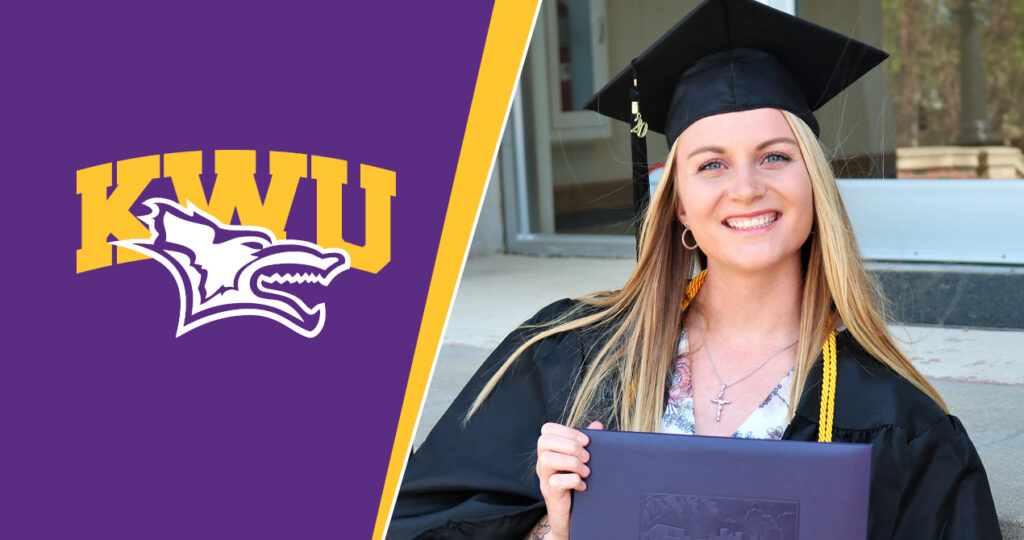 The biblical account of Esther tells the story of a young queen who found herself with a difficult choice to make – risk death by helping her people or give into fear and remain silent. In chapter four of the book of Esther, her adoptive father, Mordecai, poses a question that ushers the queen’s decision to reveal her identity and save the lives of others. In verse 14, Mordecai asks, “And who knows but that you have come to your royal position for such a time as this?”

Recent Kansas Wesleyan graduate Bailie Troll ’20 found inspiration in this verse at the conclusion of her freshman year. Originally a business and exercise science major, she became increasingly burnt out with the physical demands of her major and part-time job at the YMCA. Running during track practice was no longer a welcomed stress relief either. Of course, athletics and exercise are wholesome things, but she soon discovered how they consumed her life. Suddenly, aspirations of one day being a personal trainer and owning a gym seemed unappealing.

Like Esther, Troll was struggling to figure out her identity and take ownership of her faith and the position God created for her. One day, while standing at a proverbial crossroads and reading Esther 4:14, the decision Troll made would carve a path towards helping others.

When reminiscing about the moments leading up to that decision, Troll remembers the multitude of good-intentioned people, who believed she was a natural fit for exercise science. She also remembers the smaller group of voices, who took notice of her ability to speak truth into others’ lives.

Troll then turned to God’s Word for guidance. As her eyes scanned the scripture found in Esther, that smaller group of voices spoke louder.

“I prayed to God, ‘Give me the direction you’d like me to go,’” she said. “Then He brought me back to all the people who had told me, ‘You are really good at giving advice.’”

Troll immediately switched her double major to psychology and Christian ministry. Now, she could counsel others while serving an even greater purpose.

“It really was sort of a calling that she felt,” Troll’s philosophy professor, Dr. Meredith Drees, noted. “She became passionate about seeking truth and helping others.”

When she first arrived at KWU in 2015, Troll met the newly hired campus minister, Scott Jagodzinske. Early on, Jagodzinske communicated his vision for building up KWU’s Campus Ministry opportunities. He wanted to create a safe environment where students could share their stories with peers and staff members who were willing to listen.

Over the last few years, Troll has played an integral role in each of KWU’s budding Campus Ministry programs. Monday Night Alive is a time of worship where students also have the opportunity to tell their story. Men and women life groups take place in designated homes or locations on campus, allowing for students to forge lasting friendships and hold each other accountable. Blessings on the Go gives KWU students a chance to submit prayer requests and talk with campus ministers and volunteers during the lunch hour.

In addition to serving in each of these areas, Troll also received the opportunity to be one of KWU’s four inaugural peer ministers. This unique role offered Troll the chance to sit down with students one-on-one and listen as they shared from their heart.

“One of the things we find is students want to talk to the campus ministers, but sometimes it’s easier to start that conversation with somebody their own age,” Jagodzinske stated. “We take really seriously training students to be able to do that with their peers. They can help them grow, take the next steps and get the resources that they need. We find that students do a great job of reaching other students that way.”

Jagodzinske is excited about what is planned for this upcoming year, which includes an increase in the amount of peer ministers. The campus minister has witnessed growth in each of KWU’s areas of ministry, and students like Troll have made a huge impact. When asked about Troll’s own spiritual growth during her time serving with Campus Ministries, Jagodzinske pointed to her willingness to follow God’s lead.

“Bailie allowed herself to explore where God was directing her to,” he said. “I think that was the most important step she could have taken. Once she got involved with Campus Ministries, she found it wasn’t just something she did or an activity, but it was something that fed her soul.”

While Troll enjoyed listening and counseling her peers, the pressures of college and life crept in at times. As she gave KWU’s Baccalaureate address this year, Troll openly discussed her bouts with anxiety and depression. Troll not only grew a lot from her internal struggles, but realized she did not have to battle them alone.

Although she was away from her home in Clarksville, Kan., Troll’s relationship with her mother deepened while at KWU. She also discovered a support system in Salina – her professors, Jagodzinske and a kind-hearted woman named Annie Boswell, who hosted Troll’s life group and later became her “host mom”.

Thanks to the help of her mentors, Troll learned to face her struggles head on, knowing that God is still in control no matter how painful life can be. With her chapter at KWU now at a close, Troll is looking forward to earning her master’s and becoming a licensed counselor in Kansas and Missouri. She is also excited to continue the personal ministry God has planned for her, understanding that He has prepared her for such a time as this.

“Life hits you hard, but God has your back no matter what and He has a plan for you,” she said. “No matter how scary life can be at times, especially with what is going on with the world today, God has a plan for it and we just have to trust in that plan.”