Feature: Wetiba to Graduate as Shining Example of The Power of AND 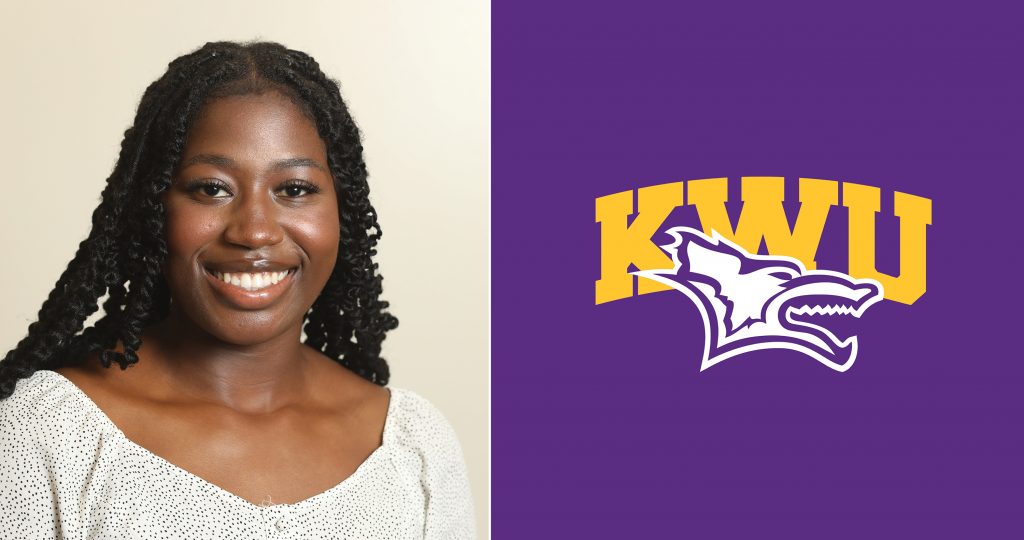 Home About News Feature: Wetiba to Graduate as Shining Example of The Power of AND

For Celine Wetiba, it’s all about the adventure — trying new things, learning about different cultures and being involved.

But when the graduating Biomedical Chemistry major took stock of her senior year at Kansas Wesleyan University, she realized she hadn’t gotten the full college experience: She was missing out on athletics. At that point, she joined the dance team to become a student-athlete.

This was in addition to being an RA and president of the Coyote Activities Board, both for two years; being fundraising chair for the campus Multicultural Student Union; working three days a week at United Radiology; volunteering in the kids ministry at her church, The Ark; and babysitting occasionally.

She completed her demanding major in three years and hopes, after a gap year, to go to medical school. In short, she’s been a tremendous example of The Power of AND.

“Anything I find interest in I try to dive into with an open mind, just to see if I like it. Most of the time I do. It’s hard not to be involved, at least for me.”

She feels as if she missed out on a lot her first year. She came to KWU on an Eisenhower Scholarship, so she didn’t have to participate in sports or music, and she felt like something was missing. Then COVID-19 hit in March 2020 and the campus shut down for the rest of the academic year.

“These past two years, I wanted to take it all in!” she said, of college life. “I didn’t get to experience this, and I’m already one year short because I’m graduating early.”

She decided she didn’t want to miss out on anything in her college career.

“The school gives you the opportunity to [participate in many things],” Wetiba said. “I said I could put my mind to it, and I did it.”

With all she’s involved in, balancing her classes and activities can be difficult.

“You can’t catch a break, but that’s OK because this is what I wanted to do,” she said. “So you just have to do it.”

She was fortunate, she said, that Goddard High School (where she went) offered dual credits, so she came to KWU with a head start.

Her family lives in west Wichita, but they came to the U.S. about 12 years ago from Kenya, where Wetiba was born.

Her goal is to exceed not just her own expectations, but her family’s expectations for her.

“I just really want to be able to make my family proud, especially since my mom and dad did so much for me to be able to be here,” she said. “I get emotional, thinking about it.”

Her freshman year, she went to a Multicultural Student Union meeting and there were “like four students,” she said.

“We couldn’t have done it without [Celine],” Smith said. “Her personality draws young people to her. She is a natural leader; people follow her. Most of all, she leads by example.”

“She’s always served as a leader and as a role model for younger students,” she said.

For Wetiba’s gap year, she plans to stay in Salina, volunteer at her church, work, study for the MCATs she’ll take this summer and figure out how to keep in touch with friends, some of whom will move across the country.

She intends to go to medical school in 2023, specializing in family practice and pediatrics.

Holding a CNA license since she was 16 and working at United Radiology, Wetiba has some experience already in the medical field.

“I feel like there’s so much more opportunity for me here, especially with the connections I’ve already made in the Salina community.” Wetiba said. “I want to take advantage of those opportunities as much as I can to maximize my efforts going into med school. Going back home would be like starting over.”

It’s important for her to give back, both to her parents and to KWU.

She said she’s proud she’ll be an alumna and plans to become involved with the Alumni Association.

“Kansas Wesleyan has honestly done so much for me,” Wetiba said. “At a bigger school I couldn’t do as much as I’ve done or be in the positions I’m in.”

She doesn’t feel as if she’s missed out on anything.