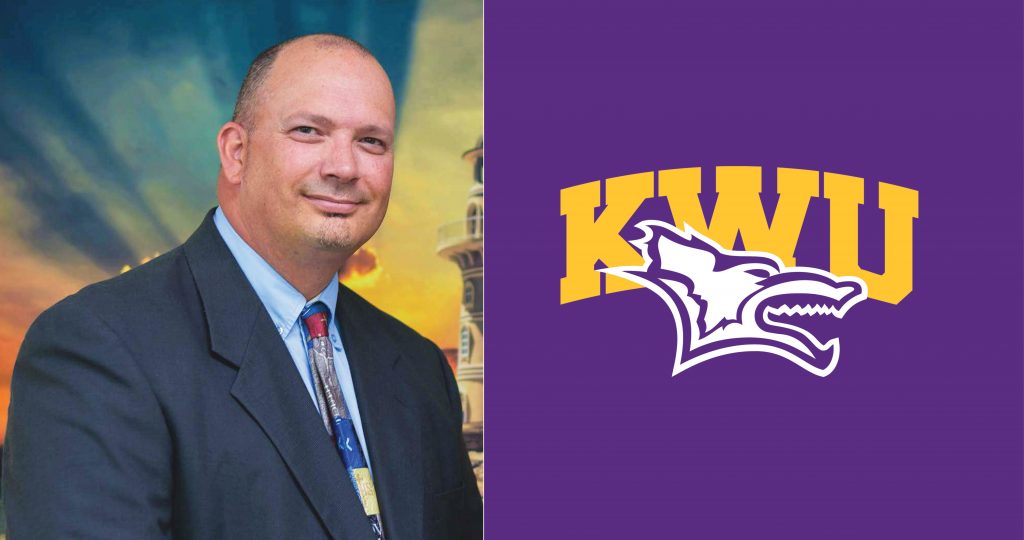 A relationship with Christ and a call to ministry led Chad Young ’06 to Kansas Wesleyan University as a non-traditional student.

“I was going back to school because I knew I had a ministry calling,” said Young, who is the executive director of the Salina Rescue Mission. “I wanted to grow in my relationship with the Lord and at the same time grow as a person and complete my education.”

“I began volunteering at the mission partly to fulfill my volunteer requirements for Kansas Wesleyan, but also because of my own past. I struggled most of my life with drug and alcohol addiction,” Young said. “I started looking for places to volunteer that were connected with my passions. I connected with what was going on here — the ministry of helping others.”

The mission is a 76-bed facility that provides a place for homeless men to sleep, as well as offers lunch and dinner to anyone in the community who needs it on a daily basis.

Young said homelessness might not be overtly visible, but it’s a reality in Salina.

“There are hundreds of homeless people in Salina. The perception is, ‘Because I don’t see them, we don’t have a skid row. Because we don’t have a skid row, it must not be that big of a problem,’” Young said. “Homelessness comes in many forms. There are people who are homeless but are sheltered. Some we don’t see because they’re staying in hotel rooms or sleeping on a friend’s couch tonight. And they don’t know whose house they will sleep at tomorrow night.

“A lot of our homeless people try to stay out of the sight of the public. They try not to draw attention to themselves.”

Kansas Wesleyan was the right fit for his education because it offered a religious, academic atmosphere.

“Faith-based learning was important because of my calling from God to be in ministry,” Young said.

During his senior year, Young was the pastor at Mentor United Methodist Church, a position he continued through his first year of seminary studies.

“While I was in seminary, I traveled back and forth to Kansas City during the week,” Young said. “I was feeling a little burned out. I talked to my wife about it, and we agreed I need to do something I really enjoy doing. I missed my time volunteering at the mission, so I started again.

“As I was walking through that, I realized my calling was here at the mission.”

In 2007, he began working as the operations director, a position he held for nine years before being promoted to executive director in 2016.

“Our mission is to rescue and restore,” Young said. “We help rescue them out of the life situation they’re in, help them to get a better grasp of the issues in their life and help them to develop the strategies and coping skills they need to overcome their obstacles, to help them get back on their own two feet. We do it all showing God’s love and grace to those who come here. Hopefully we can plant some seeds to help them grow in their relationship with Christ.”

Over the course of his work at the mission, Young said he realized it isn’t only the clients who are served.

“We also help people in the community fulfill their higher calling to serve God,” he said. “We see a lot of our donors and volunteers grow in their relationship with Christ through their experience with the mission.”

His experience at KWU assisted.

“I was committed to growing in my faith, learning to serve God and to help other people in the community,” Young said. “Kansas Wesleyan gave me the structure and foundation I needed to do that.”