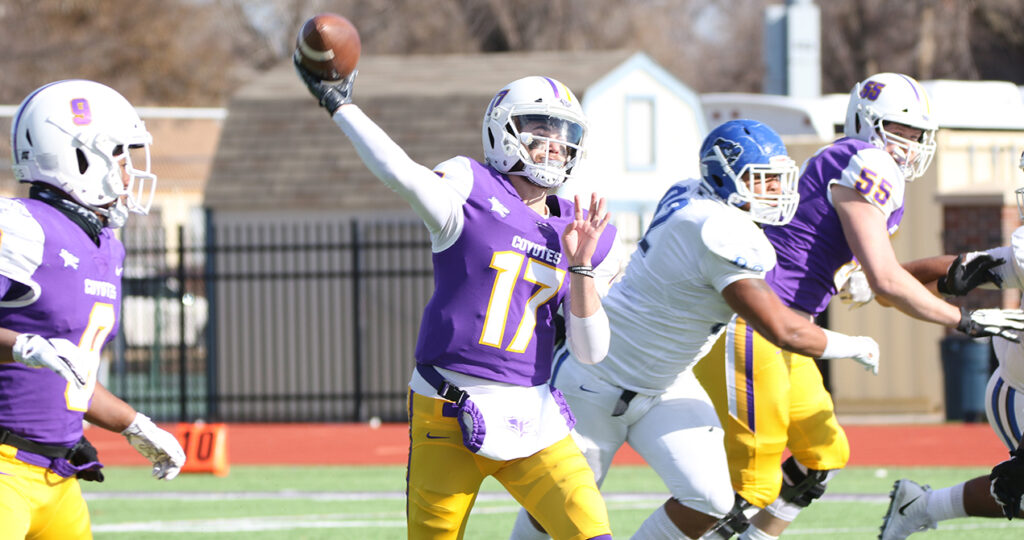 Kansas Wesleyan continues to reap the rewards of another wildly successful season.

Six Coyotes were named All-Americans by the American Football Coaches Association (AFCA) and the NAIA on Thursday, Dec. 5.

Quarterback Johnny Feauto was named First Team – schools are limited to one First Team selection – while defensive end Shaq Bradford, tight end Trenton Poe-Evans, running back Demarco Prewitt and wide receiver Stevie Williams were on the Second Team. Offensive lineman Eli Smith was an Honorable Mention selection on the NAIA team. The NAIA selects an Honorable Mention team, the AFCA does not.

Prewitt and Bradford were 2018 AFCA and NAIA All-Americans and Poe-Evans was recognized in 2017.

Wesleyan won the Kansas Conference title with a 10-0 record for the second year in a row, advanced to the quarterfinals of the NAIA playoffs and finished the season with a 12-1 record.

“We have a lot of deserving guys but those who won the awards we’re very happy for them,” Coach Myers Hendrickson said. “They’re all very deserving.”

Feauto leads the NAIA in total offense (4,523 yards), passing yards (4,089) and passing efficiency (196.4). He had 49 passing touchdowns with 12 interceptions and 434 yards rushing and three more scores. He was named the Kansas Conference Player of the Year, holds the KWU record for passing touchdowns and yards and ranks second in passing and total yards in the KCAC.

“It’s a big-time honor for Feauto,” Hendrickson said. “His senior year, to be First Team, is an incredible accomplishment.”

To read the entire story on the All-American honors, please visit kwucoyotes.com.