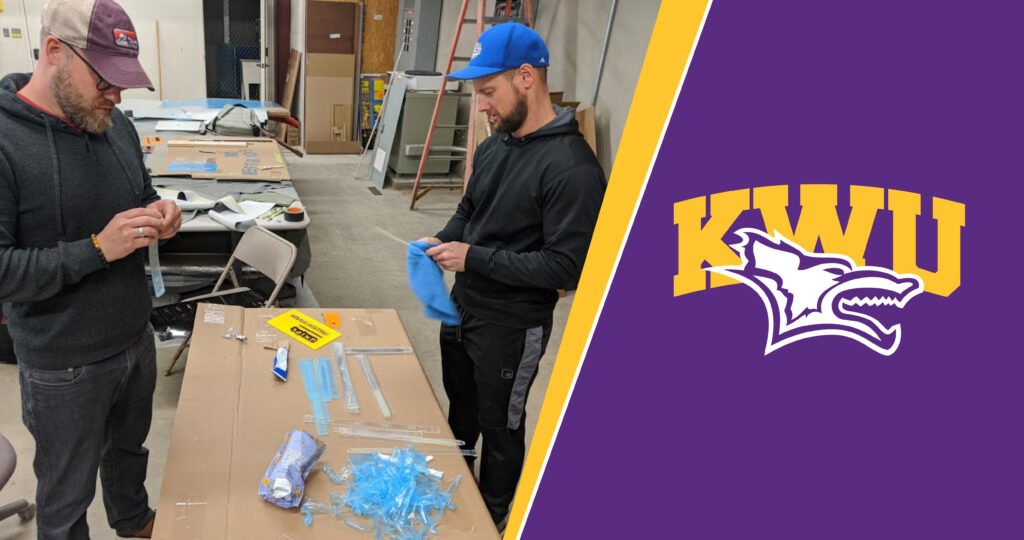 What thoughts does the term community engender? The term is used a great deal at KWU, but for two individuals with KWU ties, it has come to mean even more during this time of the COVID-19 pandemic. Helen Keller once said, “Alone, we can do so little; together, we can do so much,” and KWU professor Neil Ward and retired professor Dr. David Kraemer have become part of just that.

With the recent shortage of personal protective (medical PPE) equipment in mind, Ward worked alongside a Kansas State Polytechnic professor, using a laser provided by Crosspoint Church, to cut out portions of material needed for face shield headbands. Those items were delivered to Salina Regional Health Center and Salina Family Clinic.

Kraemer, meanwhile, has been part of a larger group headed by a local citizen named Jimmie Pottberg. The group distributed some 215 face shields over the past few weeks. Numerous emergency services and health professionals from eight different counties have taken delivery of the protective gear at no cost to them.

Joann’s Fabric, the Salina Public Library, KWU and numerous other organizations in the region have banded together to provide some of the material and services for these shields, while Pottberg has assumed the cost of the clear visor and portions of the other items. Even that visor, however, has been purchased with no profit going to the business in question, a small milling shop in the Wichita region.

“Dave Kraemer deserves a great deal of thanks on this project,” said Pottberg. “It takes up to five-and-a-half hours to produce each headband, and he is the individual donating a large portion of his time to print on KWU’s printer. I appreciate all of his efforts and assistance, as well as KWU’s donation of the ability to use the printer.”

The shields produced by Pottberg’s group have been distributed through Saline County Emergency Management, which is led by KWU graduates Michelle Barkley ’18 and Bernie Botson ’18.

“Jimmie and his team have been working diligently to help protect our healthcare and first responders in Saline County, by equipping them with 3-D printed face shields,” said Barkley. “His team quickly surpassed our need locally and moved on to providing the shields to the north central region’s healthcare facilities and first responders.”