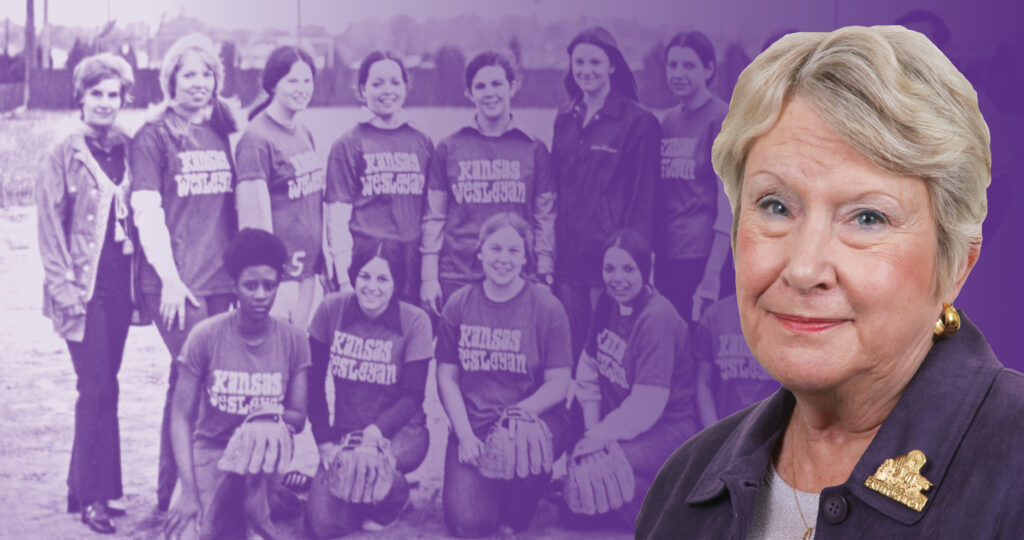 Those associated with Kansas Wesleyan are aware of Mary Virginia “Ginny” Bevan’s accomplishments and contributions to the university and women’s athletics for several decades.

Bevan, a 1956 graduate and longtime coach and instructor in women’s physical education at KWU, was a 1987 inductee into the Coyote Athletic Hall of Fame and is the namesake for the university’s Female Athlete of the Year Award and Bevan Green area on campus.

Now, there’s an ongoing attempt to recognize her achievements and the impact she had on the development of organized women’s collegiate athletics on a statewide level.

Bevan has been nominated for induction into the Kansas Sports Hall of Fame’s 2020 class as a contributor. She’s one of 53 names on the ballot with voting by a panel of approximately 300 voters concluding later this month.

The 2020 class of inductees will be announced next month. Induction ceremonies are scheduled for October 4 in Wichita.

Bevan, a 1952 graduate of Salina High School, coached basketball, softball, tennis, women’s track and volleyball at KWU starting in 1957. In 1969, she and a group of women helped form the Association of Kansas Women’s Intercollegiate Sports (AKWIS), which organized and controlled women’s competition among the state’s colleges and universities before implementation of the federal government’s Title IX legislation in 1972.

Bevan was awarded the KWU Alumni Service Award in 1982, and Professor Emerita of Health, Physical Education and Recreation in 1998.

“I feel honored to be on a list of the stature and kinds of Kansans that are on there,” Bevan said. “I feel honored to be nominated. You look at the young women today and you watch them play and see the successes that they’ve achieved … I’m just tickled to death that I got to be part of it.

“But I reiterate, there was a group of about 20 that certainly helped all along the way. I’m arm-in-arm with them and appreciate them all because they had a dream and the young women today have fulfilled it.”