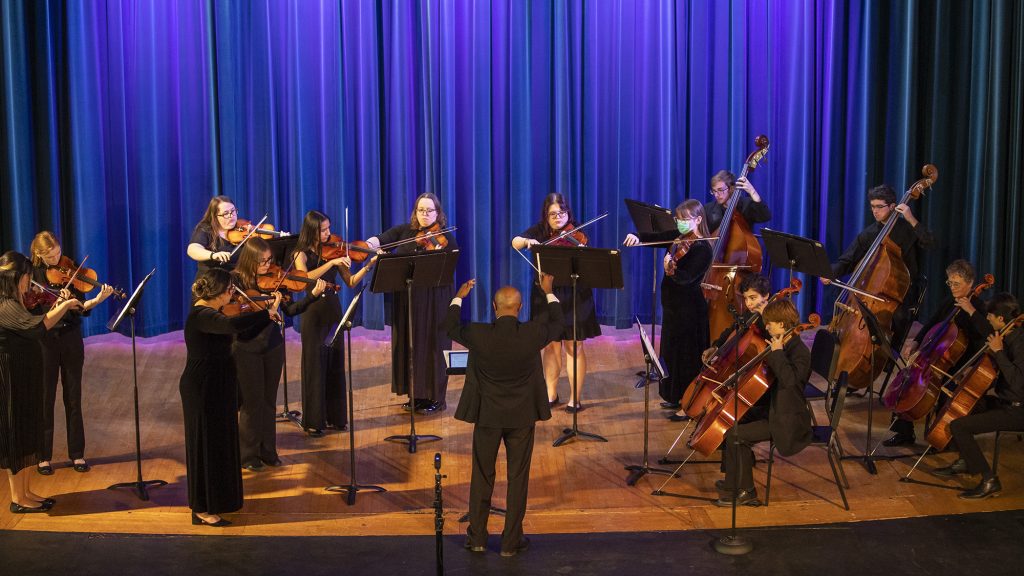 Kansas Wesleyan’s Department of Music will follow Christmas by Candlelight with the winter concert for its instrumental ensembles on Tuesday, Dec. 6, in Sams Chapel. Admission is free and the event, which features the String Orchestra, Jazz Ensemble and Wind Ensemble, gets underway at 7 p.m.

The concert, titled “A Season of Light,” features the three groups in performances of both classic and contemporary literature.

The String Orchestra, under the direction of Dr. Leonardo Rosario, will perform several seasonal favorites, including “A Joyous Christmas,” the traditional German carol “Still, Still, Still,” “God Rest Ye, Merry Gentlemen” and “It’s the Most Wonderful Time of the Year.”

The orchestra will also perform a piece titled “Celtic Carol,” which will feature student dancers Saria Taylor and Tru Haesemeyer. The choreography for the piece was created by KWU Associate Professor of Theatre Arts Karen Babcock Brassea.

Finally, the orchestra will perform Violin Concerto in F minor by Antonio Vivaldi, a work outside the holiday spectrum.

The Jazz Ensemble, directed by Steve Lueth, will perform two jazz classics, “Darn that Dream” by Jimmy Van Heusen and “Moanin’” by Bobby Timmons, alongside the Christmas classic “The Christmas Song,” by Bob Wells and Mel Torme.

The Wind Ensemble, conducted by Department of Music Chair Dr. James McAllister, will perform a mix of classic works and holiday pieces, as well.

A concert march by William Latham, titled “Brighton Beach” will begin this part of the program, followed by a moody piece by Brian Balmages called “Nevermore.” This piece will feature a student conductor, KWU junior Taiton Reed.

Two holiday works, selections from film composer Danny Elfman’s score to “The Nightmare Before Christmas” and the more traditional “Carol of the Drum” by Katherine Davis will follow. The program concludes with Robert Jager’s Third Suite.

The performance is scheduled to be livestreamed via the KWU Student Media YouTube page, with precise links available on social media prior to the show.