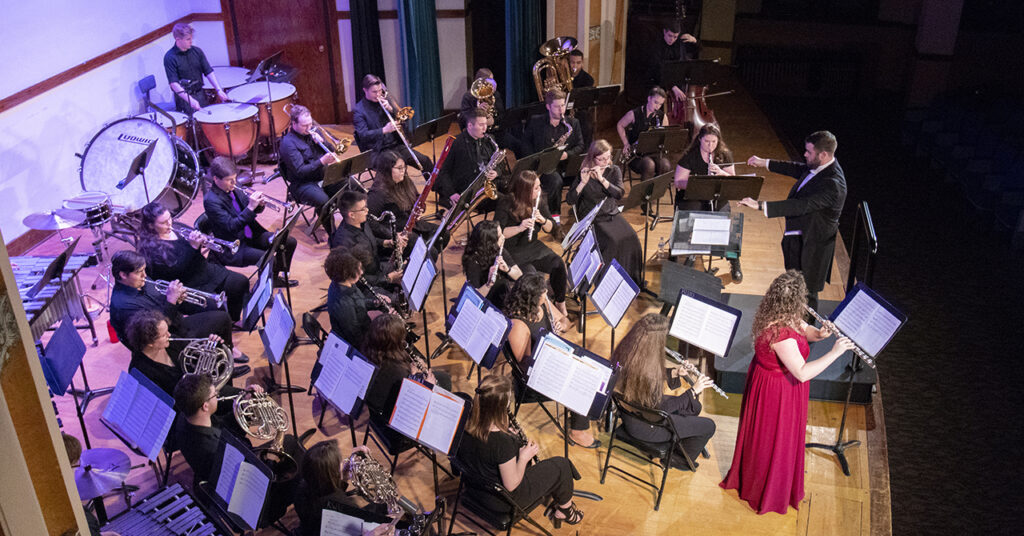 Kansas Wesleyan University’s music department will honor the contributions of women to music with a special event, “Voices of Eve: An Evening of Women in Music,” on Oct. 7. The evening, highlighted by a concert featuring the KWU Wind Ensemble, recognizes the 100th anniversary of passage of the 19th Amendment and will include world premieres of five scores by female composers. Admission is free.

The event gets underway at 5:45 p.m. with a special “Concert in Context” presentation in Fitzpatrick Auditorium. Dr. Anita Specht, KWU history professor, will discuss women’s suffrage and the importance of the 19th Amendment. There will also be comments from the composers and Dr. Milt Allen, chair of the KWU Music Department, all designed to help put the concert into historical perspective.

The scene then shifts to Sams Chapel, where the KWU Middle School Honor Band will perform beginning at 6:30 p.m. A brief intermission will follow before KWU’s Wind Ensemble takes the stage at 7 p.m.

“For centuries, Western music has been dominated by white, male composers – think Bach, Beethoven and Brahms,” said Dr. Carl Rowles, KWU’s director of bands. “Students look for themselves in others – whether it’s on TV, in the movies, in sports, and even in music. To help break through this white, male-dominated profession, band directors are taking it upon themselves to diversify their programming, to ensure that what we are putting in front of our students reflects the people sitting before us in the classroom.”

Following the concert, the five composers – Grace Baugher, Kimberly Archer, Nicole Piunno, Makenzi Johnson and Stephanie Berg – will be a part of a public post-concert reception in the Pioneer Hall Forum.

“Voices of Eve: An Evening of Women in Music” will take place just days before KWU’s Homecoming and Family Weekend, which includes the start of the university celebrating 50 years of women in athletics. The kickoff event for that celebration will be held Oct. 13 at St. John’s Military School. Details and tickets are available at www.kwu.edu/boxoffice. Readers should also be aware that a statewide exhibit on the history of the 19th Amendment will come to KWU Sept. 25.