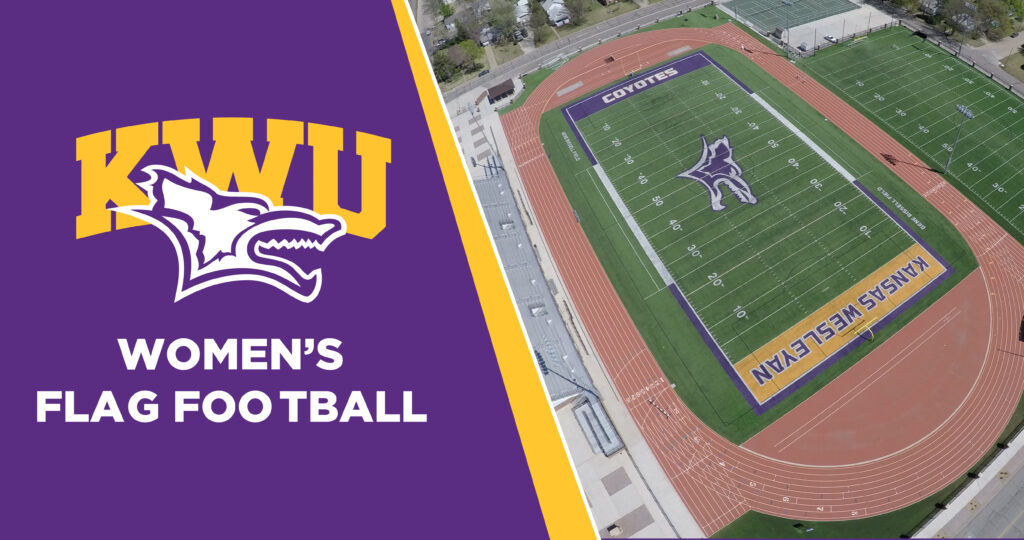 Kansas Wesleyan University has announced, along with the National Association of Intercollegiate Athletics, the National Football League and Reigning Champs Experiences (RCX), the addition of women’s flag football as an official sport on the Salina, Kan., campus beginning with the 2020-21 academic year.

Women’s flag football becomes the 24th sport sponsored at Kansas Wesleyan and the 14th with opportunity for female student-athletes. It is the first new women’s sport added since bowling in 2015, and the first women’s-only sport addition since women’s golf in 2004.

“To be on the forefront of a new sport that the NAIA is extremely excited about is huge for Kansas Wesleyan, but more importantly, we’re celebrating one of the vital moments our history, in our 50th Year of Women’s Athletics,” said Steve Wilson, Kansas Wesleyan Director of Athletics. “High-quality, varsity experiences for student-athletes are what we strive for and expect, and this opportunity has a lot of momentum at the national level, both from the NAIA and the NFL. I am excited to be part of such a groundbreaking opportunity for female student-athletes.”

Wilson has also announced that Mike Famiglietti, who serves as the offensive coordinator of KWU’s football team will serve as the program’s first head coach.

“Mike Famiglietti was an easy decision to lead the construction of this program. He understands recruiting and the level of marketing we need to build a program the right way,” Wilson said. “He’s also no stranger to high-octane offense, on the football field, which will translate. Having the right individual already on staff to build the various aspects of a high-level program is a blessing, and I am ready to get to work with Coach Famiglietti on a high-level program build.”

“I am very honored to be named the head coach for women’s flag football here at Kansas Wesleyan University. This will be an awesome opportunity to help grow the sport of football and with it, help as many student-athletes as possible reach their full potential on and off the field,” Famiglietti said. “Starting a new program will be a challenge, but with the awesome support of KWU, the NAIA, and the NFL, I know this new program will reach the high standards we expect here. Not only will this give more opportunities for women to compete at the collegiate level, but it will also help the current members of our football program. Our staff is looking forward to building a great relationship between the two teams, as they will both be part of the greater Coyote football program.”

“Kansas Wesleyan has always been on the forefront of women’s athletics in the state, going back to the efforts of Dr. Ginny Bevan that pre-dated Title IX,” said Dr. Matt Thompson, President and CEO of Kansas Wesleyan. “We are proud to continue that trend today as an early adopter of women’s flag football. Thanks to Steve Wilson for his leadership during this process, and I look forward to watching this program grow and develop quality student-athletes under the direction of Coach Famiglietti.”

The NAIA will begin working with NFL FLAG and RCX immediately to outline competition guidelines and next steps for schools and conferences interested in instituting women’s flag football. The first competitive season will be held in the spring of 2021.

The NAIA will host an emerging sport or invitational championship in the spring of 2022. An emerging sport in the NAIA is defined as at least 15 participating institutions, while invitational can be defined as at least 25. A sport must have a minimum of 40 participating institutions to be considered for full championship status.

“Football is for everyone,” NFL Executive Vice President of Football Operations Troy Vincent said. “This groundbreaking and historic joint venture provides an opportunity for the values, fun and competitive environment of football to be enjoyed as a varsity sport by female student-athletes attending NAIA institutions across America.”

As the official operating partner of NFL FLAG and the NAIA Showcases, RCX will help facilitate women’s collegiate flag football across the NAIA and drive participation through women’s flag football NAIA Showcases. The NAIA will host its first Showcase open to female football athletes in the late summer or early fall of 2020.

“Increasing female participation in flag football has been a top priority for NFL FLAG,” said Izell Reese, RCX President and General Manager. “By teaming up with the NAIA, we’re able to create even more opportunities for young women to continue the sport they love, and potentially receive scholarships to continue their education and compete at the next level.”

“The NAIA is thrilled to partner with the NFL and RCX in launching women’s flag football,” said Jim Carr, NAIA president and CEO. “This is a fantastic opportunity for our members to expand their athletics programming with support from valuable partners like RCX and one of the most relevant and successful professional sports leagues in the world.”

In addition to the women’s flag football initiative, the NFL will serve the presenting sponsor of the 2020 NAIA Football National Championship, scheduled for Saturday, December 19 at Eddie G. Robinson Stadium at Grambling University in Grambling, La.