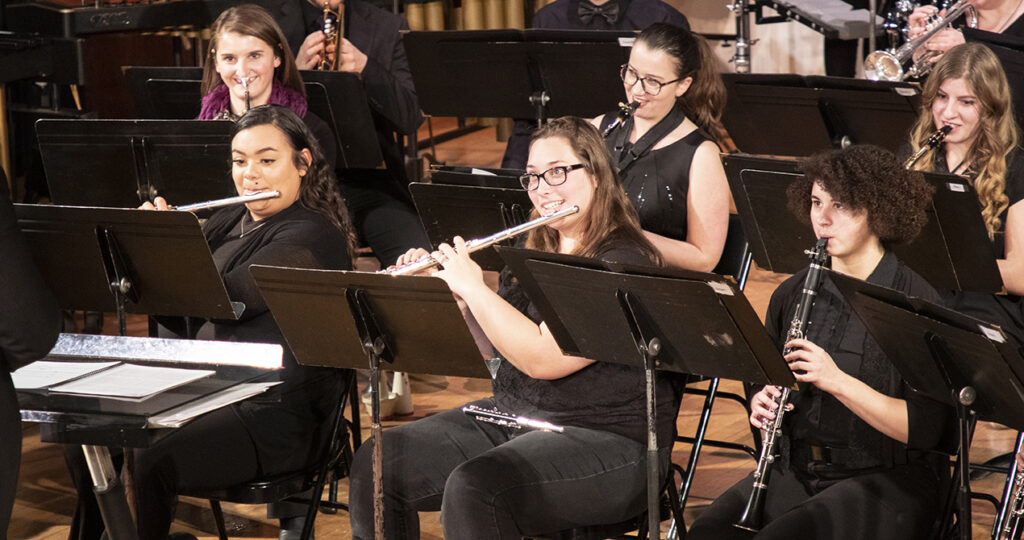 The Kansas Wesleyan University Wind Ensemble has been named a semifinalist for the American Prize Ernst Bacon Memorial Award for the Performance of American Music.

KWU is one of 22 semifinalists in the college and university division, joining such schools as the University of Kansas, Texas Christian University and the University of Nevada, Las Vegas. It marks the first time that KWU’s Wind Ensemble has been recognized as a candidate for this award.

“This award recognizes outstanding performances across the country,” said Dr. Carl Rowles, KWU Director of Bands. “To be named a semifinalist alongside many nationally recognized programs elevates KWU and is an indicator of the excellent work our students are doing. This particular award, for the regional premiere of Peter Senchuk’s Concerto for Flute and Wind Ensemble, is especially rewarding since it was a new work. There were no recordings for our students to study or other groups to emulate. They deserve so much credit for this, as does our soloist, Victoria Rose Bishop, and Senchuk, for his work writing the piece.”

The Ernst Bacon Memorial Award was founded in 2010 as part of the American Prize National Nonprofit Competition in the Performing Arts. It recognizes and rewards the best performances of American music by ensembles and individual artists worldwide, based on submitted recordings.

The public is invited to hear the newly honored wind ensemble Thursday night at Sams Chapel, when it performs a handful of pieces as part of the annual KWU High School Honor Band Festival. The event gets underway at 7:30 p.m.