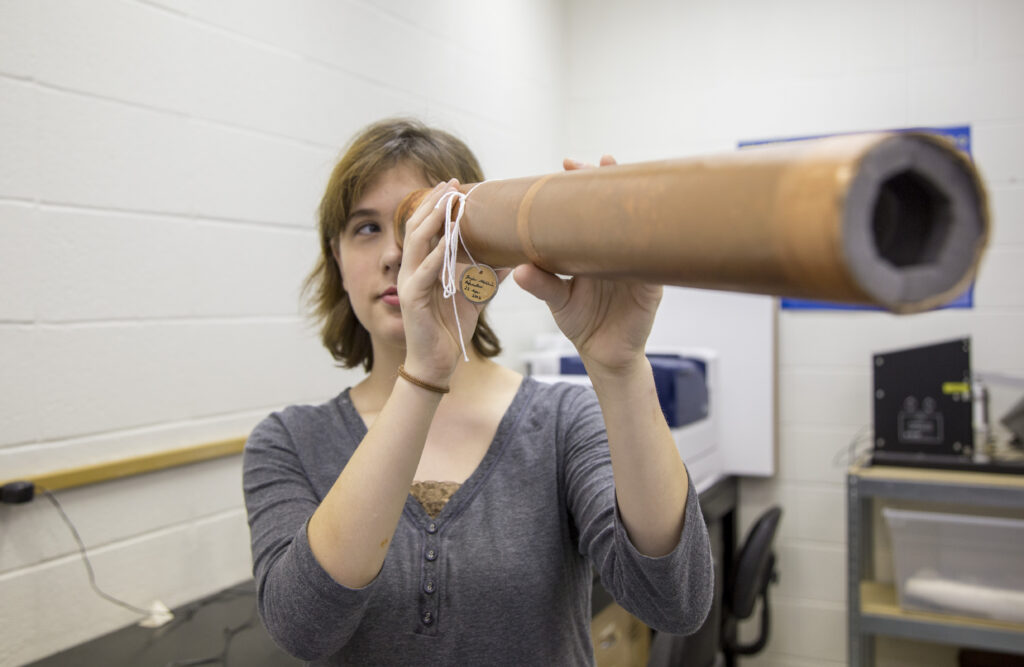 Some of life’s smallest building blocks – atoms and ions and molecules – grew into an unforgettable summer ripe with experiments, friendships and laser beams for Kansas Wesleyan student Taylor McClain.

A junior in physics, McClain was one of 15 students selected for a prestigious summer research program at Kansas State University. Funded by the National Science Foundation, REUs (Research Experiences for Undergraduates) provide immersive research experiences at universities throughout the country during summer break.

McClain explored advanced physics topics for two to three hours each week in a classroom setting, but the bulk of her summer research was hands-on in the lab. Paired with two faculty mentors, she helped assemble a new charged-particle detector for the Kansas Atomic and Molecular Physics (KAMP) instrument at K-State’s J.R. Macdonald Laboratory.

“My goal was to get the chamber and detectors assembled. This required a knowledge of how the technology works, as well as the proper assembly procedures,” she said.

The cutting-edge research McClain conducted will advance scientists’ understanding of molecules. When fully assembled and in use, the new charged-particle detector will help researchers study how molecules change when hit with ultrafast, intense laser pulses.

McClain is the seventh KWU student to take part in the nationally competitive REU program. She applied after catching the eye of some perceptive KWU faculty members. Drs. David and Kristin Kraemer noticed McClain’s hunger to understand how the world works and encouraged her to follow her passion.

When she received the acceptance letter, she was ecstatic:

That portal led the Junction City native to a world of lasers, molecules and oscilloscopes. But, she said the best part of her adventure was the people.

An introvert, McClain was pleasantly surprised at the deep bond she forged with like-minded students and faculty. This newfound confidence will help in the future, she said, both inside and outside the classroom.

Back on campus, McClain is taking upper-level physics classes and mingling with fellow science students. Close to 50 percent of KWU students are pursuing majors in a science-related field. That number will likely increase. The KWU science labs are being upgraded with nearly one half-million dollars worth of science equipment, thanks to generous donors.

One special summer couldn’t come close to quenching McClain’s thirst for knowledge. The honors student is taking a lighter course load this fall and intends to devote her extra time to research.

McClain said she would definitely recommend the REU program to other Kansas Wesleyan students:

“Take opportunities as they come, because you never know when they are going to come again.”