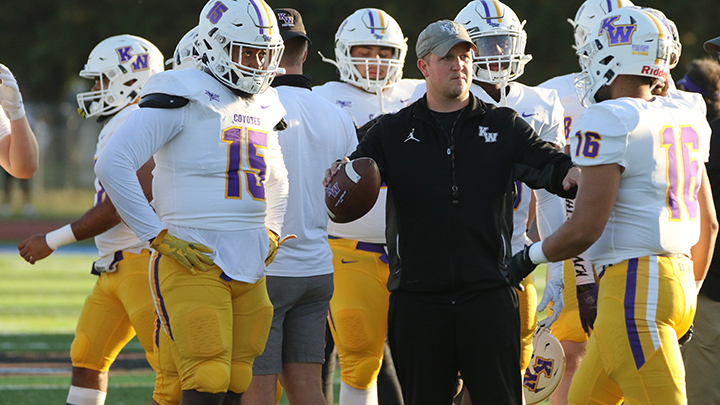 Myers recently completed his sixth season coaching with the Coyotes, serving as assistant head coach, defensive coordinator and strength and speed coach. He becomes the first KWU alum to lead the program since Virgil Baer ’36, who was the head coach from 1946 to 1948.

“Matt Myers has an unmatched passion for Coyote football. He has seen this program from every angle possible – as a player, as a coach on both sides of the ball, and now as the leader of our storied football program,” Wilson said. “Matt has been an integral part of this era of success for Kansas Wesleyan football and is the perfect fit to continue our success and reach new heights for the football program.”

The new head man’s connection with the Coyote football program extends more than a decade. Myers played for the Coyotes in four seasons – 2006 and 2013 through 2015, earning Honorable Mention All-KCAC honors in 2006 and second-team honors in 2015. He joined the coaching staff the following year and has served in numerous roles, including offensive coordinator in 2018 during KWU’s run to the NAIA Football Championship Series semifinals.

He was recently named as the 2021 NAIA Assistant Coach of the Year by the American Football Coaches Association.

“Above all, I am excited about Matt’s sense of community and his love for Kansas Wesleyan,” Wilson added.

Myers, a graduate of Southeast of Saline High School, earned his KWU degree in Sports Management in 2015. He is married to Sara, a graduate of Salina South High School and an optometrist at Salina Family Vision Care. They have two children, Madden and Henley.

Myers replaces Myers Hendrickson, who resigned on December 17 to accept the head coaching position at FCS (Division I) program Western Illinois. Hendrickson’s departure marks back-to-back Coyote head coaches to move from KWU to an NCAA Division I institution. Matt Drinkall left Kansas Wesleyan in 2019 to join the staff at Army.