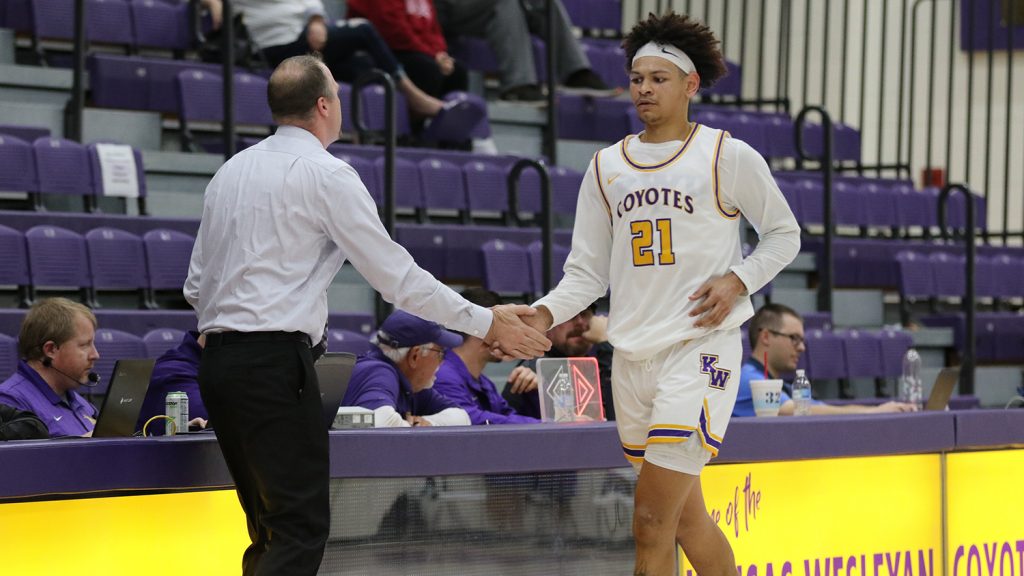 AJ Range was getting nervous. Selections for three of the four 16-team quadrants in the NAIA Men’s Basketball National Championship had been revealed but Range and his Kansas Wesleyan teammates weren’t among the chosen ones.

The Liston Quadrant was the last to be unveiled – the first four teams selected to play inside Hartman Arena in Park City. Oklahoma Wesleyan vs. Saint Katherine (Calif.) was the first pairing. Then came Indiana University-South Bend and the long-awaited announcement.

“The Titans will face the ninth seed, the Coyotes of Kansas Wesleyan,” the announcer, Brad Cygan of the NAIA Nation Office, said.

Applause, shouts of joy and relief, high fives, handshakes and hugs ensued among team members, coaches and others who gathered in the Student Activity Center on Thursday night to view the proceedings.

The Coyotes received an at-large berth to the 64-team NAIA field after finishing the regular season with a 22-10 record and reaching the semifinals of the KCAC Tournament against Oklahoma Wesleyan.

Ninth-seeded KWU and No. 8 IU-South Bend will play at 8 p.m. March 11 in Hartman Arena, the game preceded by OKWU and Saint Katherine at 6 p.m.