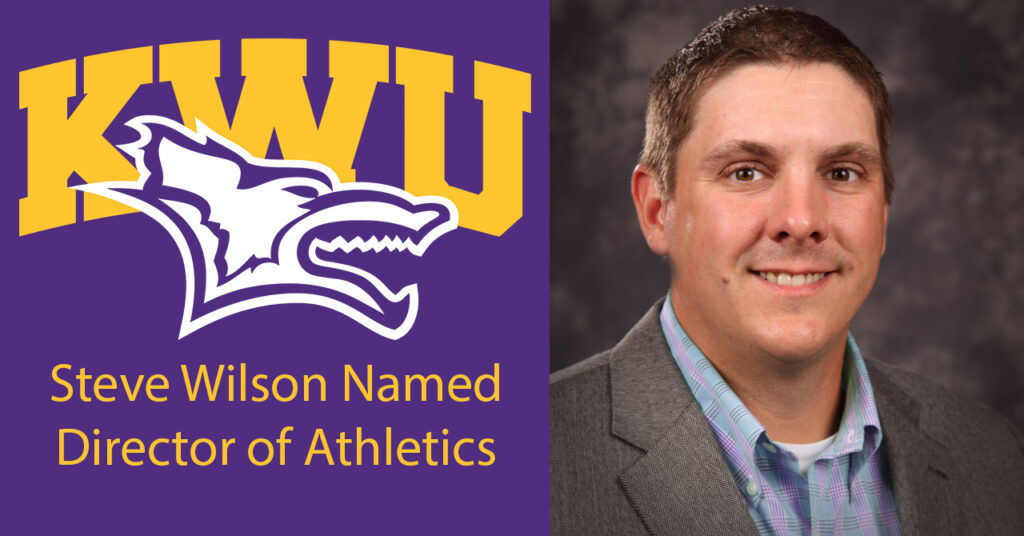 Kansas Wesleyan University has selected Steve Wilson as its next Director of Athletics as announced by University President Dr. Matt Thompson. Wilson succeeds Mike Hermann, who left KWU for a position at Old Dominion University in late September.

“I am very excited to have Steve on board at Kansas Wesleyan,” Thompson said. “As we looked at the pool of candidates, 60-plus to start; narrowing it down to eight for a first round of interviews and two on-campus interviews; it was clear this was a very desirable position and one that had a great pool of candidates. To know Steve was our final selection indicates that we got the very best.”

Steve comes to Kansas Wesleyan after spending the last 15 months at Park University Gilbert in Gilbert, Ariz. as Director of Athletics. While at Gilbert, Wilson was responsible for building an athletics program from scratch, fielding 11 varsity teams and recruiting more than 260 student-athletes, competing for the first time in 2019-20.

Also while at Gilbert, Wilson was responsible for the overall operation of the Buccaneer athletic program, including coordinating facilities, budgets, fundraising, corporate sponsorships and community relations, including serving as the sports information director as well as the head golf coach.

“I want to thank President Thompson and the search committee for believing in me and for this opportunity,” Wilson said. “Kansas Wesleyan is a special place, and its belief in a superior, character-driven experience is impressive. I’m excited to come home to an elite NAIA program, and to continue the momentum begun under Mike Hermann’s leadership.”

Wilson is no stranger to Salina and Kansas Wesleyan. He is a Salina native, graduating from Salina Central High School in 1999 and interning and taking classes at KWU.

“This is home for me. My dad (Dave Wilson) has been on the chain gang for over three decades, and I was that kid that wanted to tag along. I probably ran out on the field during games, and spent a lot of time on the visiting sideline,” he said. “I got to see KWU a lot growing up. The institution is in my blood. I spent a couple of stints going to classes there in high school, and then a couple of graduate classes before going to Texas.”

After graduating from Kansas State, Wilson returned to Salina to work at KSAL, where he covered Kansas Wesleyan games on the radio and worked with sports information director David Toelle, before taking a sports information position with Texas State University.

“But it’s more than that. It’s the work that President Thompson has done during his tenure and the things that Mike Hermann accomplished while he was here,” Wilson added. “Kansas Wesleyan is a destination place for athletic administrators who want to do something elite and do it right. And that’s doing it through character-driven athletics and a superior student-athlete experience.”

“Steve has a hometown connection, which matters a lot,” Thompson said. “The Salina community is very important to us, and the fact that he cares and wants to be a part of this bigger, broader community really does matter as well.

“Steve’s vision, his excitement, the energy he’ll bring and his success in fundraising are all attributes which make him the best person for this position.”

Prior to taking the position in Gilbert, Wilson spent 11 years in Parkville, Mo., where he most recently served as Associate Athletic Director for Media Relations and Compliance at Park University’s flagship campus. Prior to his year as Associate AD, he spent four years as Assistant Athletic Director for Sports Communications after beginning his tenure with Park University as the Pirates’ Sports Information Director, from 2007 to 2013.

From 2013 to 2017, he also served as the Pirates’ head women’s golf coach, leading the team to a school record for scoring and first-place tournaments in his final season, 2016-17. He mentored the program’s only CoSIDA Academic All-American, Makenzie Shivers, who broke the Pirates’ career scoring record in her senior season. He also recruited Genevieve Stelmacovich, Park’s second CoSIDA Academic All-American, who was part of a record five newcomers prior to the 2014-15 season, when Wilson took the Pirates’ women’s golf roster from five student-athletes to nine.

In 2013, he was honored as the Clarence “Ike” Pearson Award winner by NAIA-SIDA, an award given to sports communications professionals in NAIA-SIDA for lifetime achievement.

A 2004 graduate of Kansas State University, Wilson began his career in sports information as a Graduate Assistant at Kansas Wesleyan University during the 2004-05 school year, assisting with publicity for the Coyote football, men’s basketball, baseball and women’s basketball programs. In 2005, he joined the athletic media relations staff at Texas State University in San Marcos, Texas, where he was the primary contact for women’s volleyball, women’s basketball and baseball, while also assisting with publicity efforts in the Bobcat football program.

While at Texas State, Wilson also provided basketball and baseball play-by-play on KTSW-FM. Away from San Marcos, Wilson assisted on the game-day staffs of the 2005 United States Basketball League Championship, the 2006 NCAA Women’s Basketball Regional in San Antonio and the 2006 NCAA Baseball Regional in Austin, Texas. During the 2005 football season, he also assisted the game-day efforts of the New Orleans Saints, who were relocated to San Antonio by Hurricane Katrina.

Prior to his work in sports information, Wilson was a play-by-play voice and account manager for KSAL-AM in Salina, Kansas, as well as a contributing writer and assistant editor for Rivals.com College Baseball. He received top honors in the student play-by-play category by the Kansas Association of Broadcasters in 2003.

In addition to his continuing education efforts through CoSIDA and NAIA-SIDA, he is also a graduate of the Leadership Northland program, operated by the Northland Regional Chamber of Commerce, and in May 2013, he graduated with a Master’s of Public Administration with a concentration in Nonprofit Management from Park University.

“I am impressed with Steve’s leadership and what he has done in his career, as an award winning SID, and his great success as an assistant athletic director and as an athletic director,” Thompson said. “I am also very impressed with what he has done at Park Gilbert, growing that program from zero students to more than 250 in a year. His outstanding focus on the student-athlete experience, and his knowledge of creating a great game day environment are two of the key aspects that made him the stand-out candidate for this role.”

Wilson is married to Juli Wilson and they have a 3-year-old daughter, Finley.