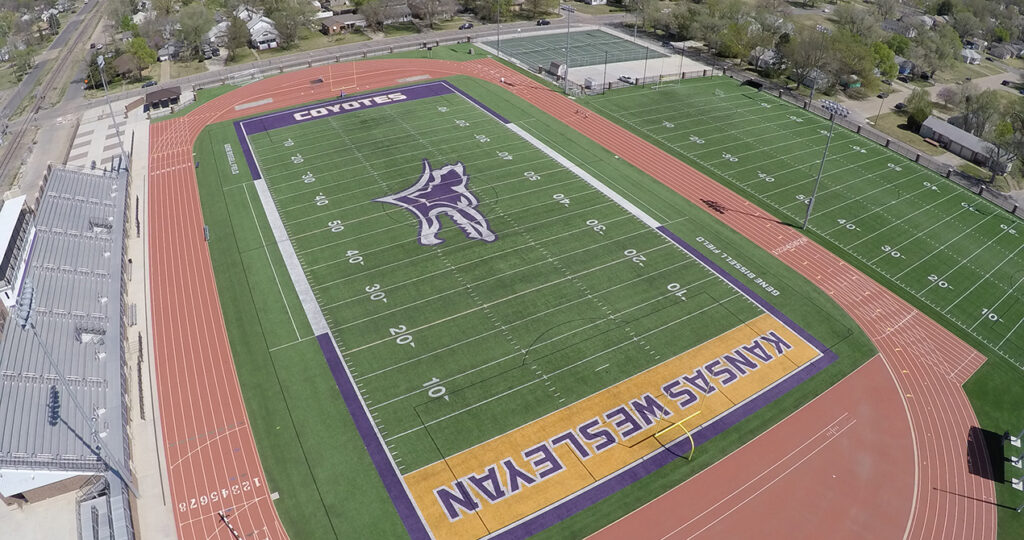 Mike Famiglietti hadn’t worked with female student-athletes since his years in high school and college.

When offered the job of head coach of Kansas Wesleyan’s new women’s flag football program he quickly accepted. He viewed it as an opportunity to work with women again and do so as a head coach at the collegiate level in the sport he’s most passionate about.

Famiglietti will lead the Coyotes into the program’s inaugural game at 4 p.m. Sunday against Ottawa at Graves Family Sports Complex.

KWU is one of 16 schools playing flag football in the NAIA and was of the first four to sign up.

“The unique thing is it’s never really been done at the college level nationwide and we’re part of the pioneering group,” Famiglietti said. “We really didn’t have a blueprint to follow.

He and assistant coach Valerie Ochoa have spent months building the program from ground level – recruiting, conditioning, teaching the game to athletes, uniform design, practice schedules, game schedules and, most importantly, familiarizing themselves with the intricacies of flag football.

The game features seven-on-seven competition played on an 80-yard field. The quarterback can throw to any of her six teammates on the field.

“I’m constantly educating myself about the game and really working to establish a positive program culture, one that wants people from all backgrounds all over that pushes them to be their best off and on the field,” Famiglietti said.

“The quarterback can run it and then you also have six options to throw it to so there’s a lot of weapons on the field and lot of different ways to get people open – a lot of unique things that aren’t possible in the men’s game.”

Recruiting, of course, was task one. KWU’s roster features 16 women from seven states, some who compete in other sports at the university.

“We really tried to open up a bridge to people who’ve never played the game before not because of a lack of interest but the lack of opportunity,” Famiglietti said. “We almost had to start from ground zero from a teaching level and really involve our players in that entire development.”

It’s been a whirlwind time for Famiglietti. In addition to building the flag program he’s also offensive coordinator for KWU’s football program but never imagined he’d be doing both simultaneously.

The football team plays the first of four spring games March 6 at GFSC – the split schedule the result of the coronavirus pandemic.

“I just thought this is going to be really cool to have even more time to have football year-round,” Famiglietti said. “Back then we never thought we’d be playing padded football at the same time in the spring.

“It’s definitely a lot of hours but the more I can help student-athletes from all over the more effort and time I want to put in.”

“She has a cannon (for an arm). You’re going to see her run around and see her throw it all over the field,” he said.

The Coyotes will play 12 games, four at home. Other home dates are March 14 vs. Cottey and Midland, and March 21 vs. Midland.

“Our ladies are ready for the challenge and they’re excited and ready to go for the first game and make a lot of history,” Famiglietti said.

UNDERSTANDING THE GAME
The game is played much like men’s football. There are passes and runs. The teams play four 12-minute quarters. The field is a bit smaller at 80 yards in length and 40 yards in width.

There are some differences. There is no kickoff. The team that wins the toss and chooses offense first starts at its own 14-yard line. First downs are not 10 yards. Teams must advance beyond the next 20-yard sector line for a first down. So the first play of a drive is 1st-and-6. If the play is stopped at the 21, then it is 1st-and-19.

There are two cones placed on the field that indicate the “neutral zone” that cannot be impeded on by either the offense or defense. If it is, it is a dead ball and penalty enforced.

The clock runs during most of the game. It does not stop on out of bounds or incomplete passes. It stops on possession changes and scores. In the final two minutes of each half, the clock does stop as in men’s football.

Speaking of scores that looks a bit different as well. There’s no kicks, so teams can choose how to attempt the PAT. Teams can go from the 3 for one point, from the 10 for two and from the 20 for three points.

Any time the ball hits the ground, it is dead at the spot, except on a punt, when the ball is live until downed, or fielded by the receiving team.