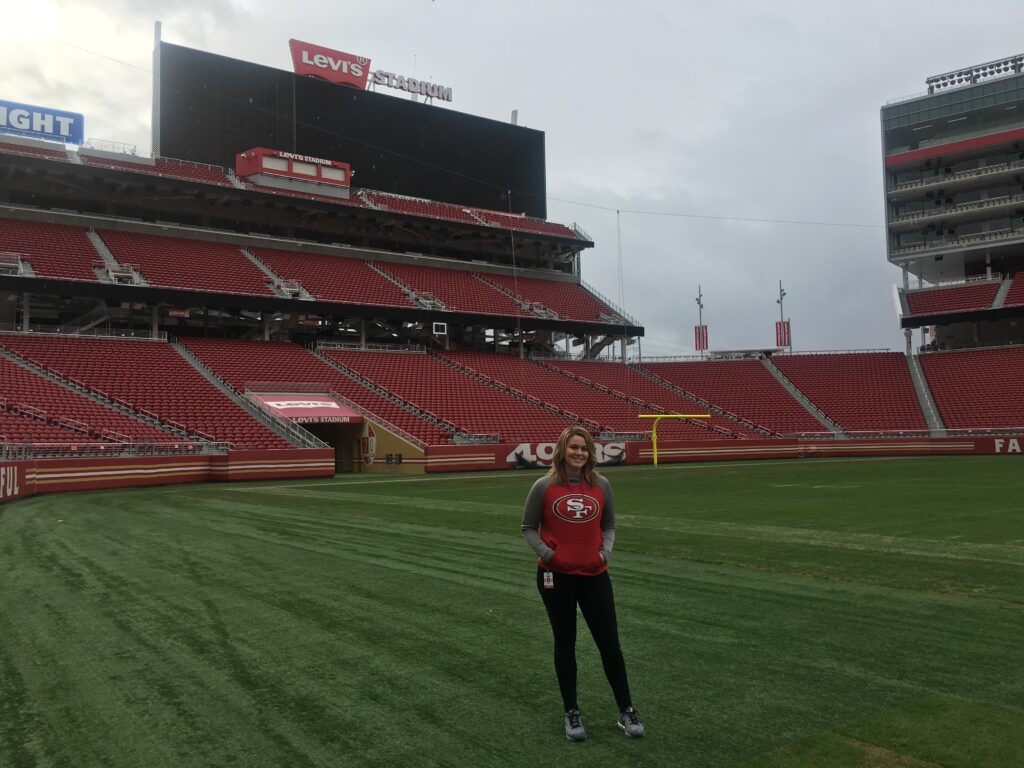 It didn’t take long for Chase Hartman ’12, Tessa Giammona ’13 and Time Feaster ’10 to land once-in-a-lifetime opportunities with national sport franchises. The three sports management alumni are enjoying early career positions with National Football League (NFL) franchises in California, and all three attribute their career readiness to in- and out-of-the-classroom experiences they had at Kansas Wesleyan.

Although Tim Feaster was hard to stop as defensive back for the Coyote football team, he knew that his physical size would prevent him from playing football professionally. What couldn’t be stopped was his passion for sports and desire to work in a related field. He served a variety of roles in high school, college and professional athletics before landing the equipment specialist position with the Oakland Raiders.

One of the unique aspects of Feaster’s duties includes equipment maintenance. He is the “MacGyver” of the football team.

“The game doesn’t stop for an equipment malfunction,” Feaster said. “I have to be creative to get equipment functional in a timely manner.”

Feaster is responsible for practice field setup, assisting with player drills and ensuring that players have all necessary attire and equipment.

“I have routines with the receivers, and I frequently find myself catching passes from (Oakland Raiders Quarterback) Derek Carr. It’s amazing to get paid for something that I am so passionate about.”

Feaster also has experience in player development and scouting for teams such as the Major League Baseball Tampa Bay Rays. Feaster plans on enjoying a long career in professional sports as a head scout or equipment manager.

It is unusual to find a young woman who aspires to work in the NFL, but Tessa Giammona comes from a long line of football greats and has a passion for the game. She grew up on the sidelines next to her father, who coached high school football, and heard many stories from her uncle, former New York Jets and Philadelphia Eagles running back, Louie Giammona; who is the nephew of legendary NFL coach Dick Vermiel.

Giammona got her feet wet while participating in an internship with the Salina Bombers indoor football franchise during her senior year at KWU. She also spent time on the KWU sidelines and credits former KWU defensive coordinator Bob Frey for taking her under his wing and allowing her to gain experience in all aspects of football operations. Her experiences in Salina eventually landed her internship opportunities with the Kansas City Chiefs and San Francisco 49ers.

As the current corporate communications intern with the 49ers, Giammona assists in preparing coaches, players and staff members before media interviews. She also generates, edits and updates website content such as player biographies, team news and game day releases.

“I have worked many exciting events including the Beyoncé Formation World Tour and Super Bowl 50,” said Giammona, whose dream job is to be head of an NFL franchise’s communications department. “But the best part of my career, as cliché as it sounds, is that I wake up every day excited to go to work. I’m very fortunate to love my job.”

Chase Hartmann secured an internship with the San Diego Chargers while attending KWU. He went from intern to front-office staff after graduation, landing a spot in the organization’s community relations program.

Hartman now coordinates game day field presentations, guest appearances and special ceremonies. He is also responsible for various community events and charitable campaigns. Hartman is most passionate about the opportunities his career provides for him to interact with youth football players.

“I can say with confidence that football taught me a number of life values that have shaped me into the man I am today,” said Hartman, who was an offensive lineman for the KWU Coyotes. “I cherish any opportunity to use the sport to impart these same ideals to youth.”

For Hartman, the lessons learned while studying at KWU were the driving force behind his professional success.

“Although all of my classes at Wesleyan contributed to my development, the most influential experience was Paul Hedlund’s Business Leadership and Ethics class. I learned how to be a professional, how to take pride in my work and how to communicate effectively.”

Through his experience with the Chargers, Hartman’s passion for youth football has grown. He plans on eventually becoming the director of youth football for an NFL franchise.