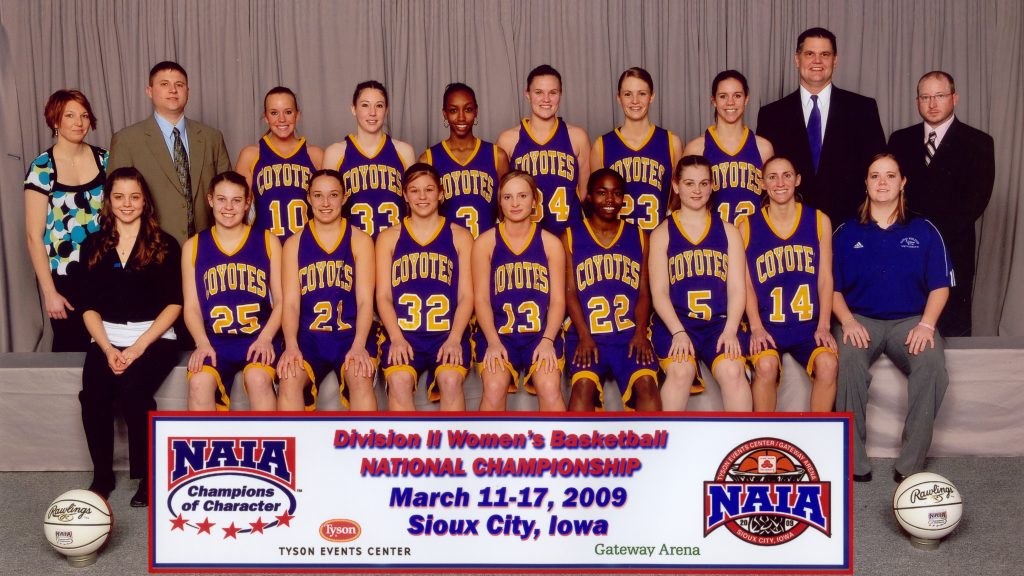 Home About News Feature: One Meeting Changes a Team’s History

Kansas Wesleyan University women’s basketball players Emily Luckeroth and Kaylaen Dittmer had been summoned to coach Gordon Reimer’s office for a “cabinet meeting” shortly after the start of the 2008-09 season.

“Ditt and I got together prior to that, and she and I think we have all the wisdom in the world – we were about to go in there and give Reimer a piece of our mind,” Luckeroth said after KWU started the season 2-3.

“We sit down and he starts reading us the riot act about what we weren’t doing, what we should have been doing, what he thought he was going to get out of us,” Luckeroth said.

“It was some pretty tough and direct feedback about how we were doing as leaders and how we needed to step up,” Dittmer said. “Honestly, I really think that was the biggest changing point for the team because Emily and I really took it upon ourselves that we’re going to be leaders.”

It was, indeed, the watershed moment for the Coyotes, who proceeded to win 25 of their next 28 games, a streak that included a victory over No. 5-ranked Sterling inside Mabee Arena during the regular season and another victory over the top-seeded Warriors in the championship game of the Kansas Conference Tournament in Sterling – the program’s first tournament title and the first victory in Sterling since 1980.

They defeated Aquinas, Mich., in the first round of the NAIA national tournament for their 15th consecutive victory before falling to Black Hills State, S.D., in the second round.

The 2008-09 team will be inducted into the Coyote Athletic Hall of Fame at 8 a.m. Oct. 22 inside Muir Gymnasium as part of Homecoming 2022. Reimer will be enshrined individually after leading the program for eight seasons.

“As seniors, our last year, we knew that this was really our last rodeo and we wanted to make sure we made the best of it,” said Dittmer, who was chosen the KCAC Player of the Year (and went on to be inducted into the KWU Athletic Hall of Fame in 2019). “And we made sure we developed a close bond off the court, which helped us trust each other and have each other’s back on the court.”

Reimer set the course and the team did the rest.

“They wanted to win the championship as much as I did, and they bought into everything that I wanted to do in the program offensively and defensively,” he said. “They deserved it because they really put their hearts into it.”

The winning streak began Jan. 17 with a victory at McPherson and gained full steam three games later on Jan. 29 with the victory over Sterling before a packed house inside Mabee Arena. The Warriors were ranked fifth in the NAIA at the time.

“I remember it was a blackout night so everybody was coming in their black shirts and the gym still had that brand new smell because it was the first year it was open,” Luckeroth said. “I remember us not playing up to our potential in the first half and coming back second half and beating them on our floor.”

The regular season ended with seven more victories. KWU defeated Bethany and Tabor in the conference tournament before heading to Sterling for the title game.

“I remember going by one of their rooms off the court and they already had a cake and all sorts of decorations made,” Luckeroth said. “They pretty much had had it in their minds that they were taking it. As fun as it is to win on your home floor, oh man, there is just nothing like quieting a crowd like Sterling had.”

“My favorite memory is beating Sterling on their home court for the tournament championship. That was a highlight of the year,” Dittmer said.

“They were the team to beat and you had to go through them to get anywhere, so that was a really important victory,” he said.

Many of the players remain in contact today, 13 years after the fact.

“We hung out with each other off the court, went to dinner, went to movies,” Dittmer said. “I don’t have any sisters, personally, but I felt like that group was like a sisterhood and we were just so close and had such a strong bond and cared a lot about each other.”

“Ditt and I used to laugh about it because she and I share the same birthday, April 7, so we always kind of felt like we were kind of kindred sisters,” Luckeroth said.

Close off the court but much different on it.

“I’m more vocal, I’m going to get in your face and tell you exactly what I think you should be doing, and that’s the kind of captain that I was, whereas with Ditt there was more let me show you and lead by example,” Luckeroth said. “She was going to be first in every single drill we had, she was going to outwork everybody on the floor. I think having us as co-captains we had the full spectrum covered and being that extension of the coaching staff on the floor.”

Luckeroth, Dittmer and LaCole Wilkinson were named First Team All-KCAC and NAIA All-America selections. Dittmer also was named to the KCAC All-Defense team along with Player of the Year. Jennie Vopat was Honorable Mention All-KCAC and Reimer the KCAC Coach of the Year.