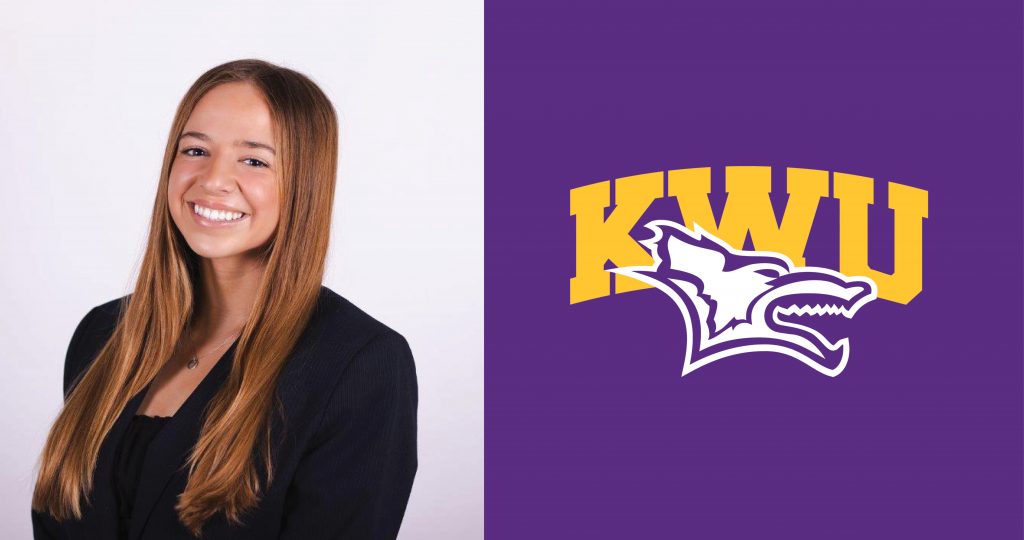 EDITOR’S NOTE: This continues a series of feature stories on 2022 graduates.
Karley Benson — May 7
Celine Wetiba — May 4

Taking her senior year easy would have been a bad business decision for Paige Welk.

“Every year I go to school, I want to do more things and try new things, push my limits,” Welk said.

One thing she tried this year was DECA, a business-based competition that provides students with problems and gives them 30–60 minutes to produce a solution.

For her first year, she did better than all right. She placed in the top 10 of her individual event, sales management, at the international DECA competition in Baltimore. All 14 of the team members placed in their top 10, making Kansas Wesleyan University the only school of more than 100 competitors to do so.

“I joined to see what I could do,” Welk said.

She thought about joining last year, but with all of the events online instead of in-person, it just didn’t resonate with her.

Her academic advisor and DECA coach, Dr. Trish Petak, associate professor of Business and Accounting, recruited Welk for DECA after seeing her work in the classroom.

Welk has good decision-making abilities and a high level of work ethic, Petak said, adding that she’s also energetic and fun in class.

“I love learning,” Welk said. “I may not love homework,” she added, smiling.

Trading the ocean shore for the prairie was also a new thing to try for Welk, who calls Laguna Niguel, Calif., home.

“Softball and grades gave me a good scholarship,” Welk said. “It’s pretty much the reason I came here [to KWU]. It’s a lot cheaper to go here than at home.”

Compared with the cities on the West Coast, Salina is a small town.

“It’s a big transition but I wouldn’t change it for the world.” Welk said. “I enjoy the small-town aspect. It’s nice to have time for community stuff, and people are friendlier, in general.”

She started at junior college undecided and took a lot of different courses to see where she might fit in.

“I never saw myself going into business, but when I was about to graduate I looked into the major. I thought it was something that would be good for me because it’s very personable. You are connected to other people and what they like, just communicating with them,” she said.

In her two years at KWU, Welk has been busy. She’s an outfielder on the softball team, which competed at the KCAC Championship last week.

She’s vice president of the Coyotes Activities Board and a resident assistant in Pfeiffer Hall. She attends Student Government Association meetings, which she finds helpful in keeping up to date and thinking about what could be done better for the university.

She belongs to the Fellowship of Christian Athletes, as well as a women’s group that meets at University United Methodist Church and attends services at The Ark.

Whenever she can, she heads outside to jog, hike or swim at Wilson Lake. She loves being in the water and outside in the sun. At home, she’s an ocean lifeguard.

“I just love getting outside, going for a walk, trying a different sport, biking,” Welk said.

Although she misses the beach, she’s hoping to be in central Kansas for at least another year.

She has another year of eligibility on the softball team, but she may not have time to play, depending on what job she has. She’s thinking about taking classes for her real estate license at the same time.

She’ll hang on to at least one old favorite: She plans on participating in DECA again.

“We’re really excited she’s coming back and will be in DECA again,” Petak said.

“It’s been a journey of getting involved a lot,” she said. “A lot of new people have come into my life from joining all these different things. It’s been rewarding — they’ll be my longtime friends.