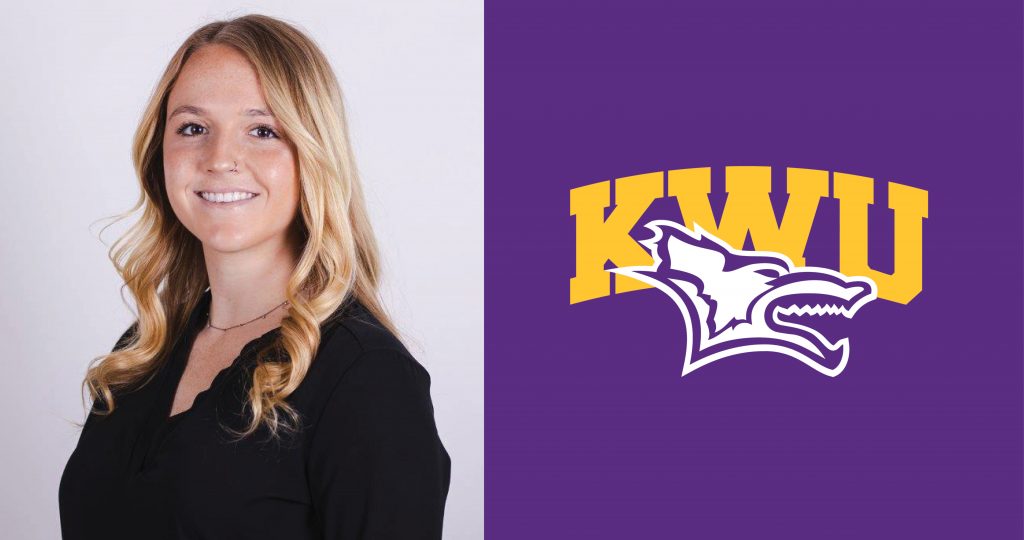 Emily Monson knew next to nothing about DECA when she arrived at Kansas Wesleyan as a sophomore.

Transferring from Pittsburg State after she realized she missed playing volleyball more than she initially thought, Monson became aware of DECA after her arrival at KWU.

“I was interested, at first, because I knew the group that was in it,” she said. “It was a really fun group and some of them were volleyball players and other people whom I just knew throughout campus. Then Dr. (Trish) Petak and Dr. (Paul) Hedlund talked to me in classes the fall of my sophomore year. It piqued my interest – what it actually was and learning more about it.”

Monson signed up and promptly became a DECA standout, just as she became a leader and marquee player on the volleyball team.

She competed in both for three years and closed her college career in grand style this spring. Monson and senior volleyball teammate Ryann Kats won the DECA championship in business-to-business marketing competition at the organization’s international event April 9-12 in Baltimore.

A couple of weeks later, Monson, a defensive specialist, was named recipient of the prestigious Virginia Bevan Female Student-Athlete of the Year during the annual Yotee Awards ceremony. That recognition came five months after she was chosen the Kansas Conference’s Defender of the Year and a First Team All-KCAC selection, both for the second consecutive season.

Monson departs KWU this spring with a degree in graphic design and marketing communications. Her career goal is to have her own freelance design agency.

“Being able to take my business education here as well as the experience of actually marketing myself in the marketing communications event and business-to-business marketing event is going to help me exponentially,” she said.

“It’s a lot of working with and collaborating with clients, hearing their ideas and being able to match it with what they want. You have to read people, and I believe DECA has helped with that – being able to know how to communicate your ideas to people.”

Monson played intramural volleyball at PSU but wanted more. She contacted then-KWU coach Fred Aubuchon about transferring and was given a scholarship.

She was an individual DECA competitor her first two years, before Petak chose to partner Monson with Kats. A dynamic duo was born. Kats, a graphic design major, was a four-year DECA competitor and right-side hitter in volleyball.

“Emily and Ryann both made the final round of DECA last year which was a virtual international competition,” said Petak, KWU’s DECA coach and an associate professor of Business and Accounting. “Both returned and knew they had what it took to be very successful this year.”

“Dr. Petak partnered me and Ryann knowing that we had been teammates on the court and friends for a while,” Monson said. “She played to those strengths.”

DECA teams have 60 minutes to prepare after receiving their case and then make their presentation to the judges.

“We usually did a PowerPoint,” Monson said. “You get 15 minutes to relay your ideas and things that you created it in that hour with your team. Ryann and I bounced ideas off of each other and were open to listening to each other’s ideas. It’s definitely a lot of trust, I know I can trust Ryann and she can trust me.

“It’s also learning each other’s likes, tendencies and what each person’s strong suit is. Playing off that in our presentations to the judges really helped.”

Monson was eager to work with Kats after their time on the volleyball court playing for coach Jessica Biegert and helping KWU compile a 21-9 record (9-3 in the KCAC) in the fall.

“Confidence-wise it really helped playing in front of a crowd with your team,” Monson said. “You have those people beside you and I feel like it transfers over to DECA just the same. I believe that Ryann and I are both strong leaders and that helps in confidence and being able to talk with our judges and know what we’re talking about.”

“Emily’s ability to confidently communicate creating strategies while also designing visually appealing slideshows is what helped her and Ryann become the best in the world,” she said. “I’m proud of the effort they both put into DECA – the hardware does not come without hard work.”

Monson was thrilled to go out on top after she and Kats placed second in the state competition in January.

“The whole trip was just amazing and I’m really glad I got to experience it at least once while I was here,” she said. “I think we did a great job.”