Feature: Remembering the Persistence of a KWU Legend 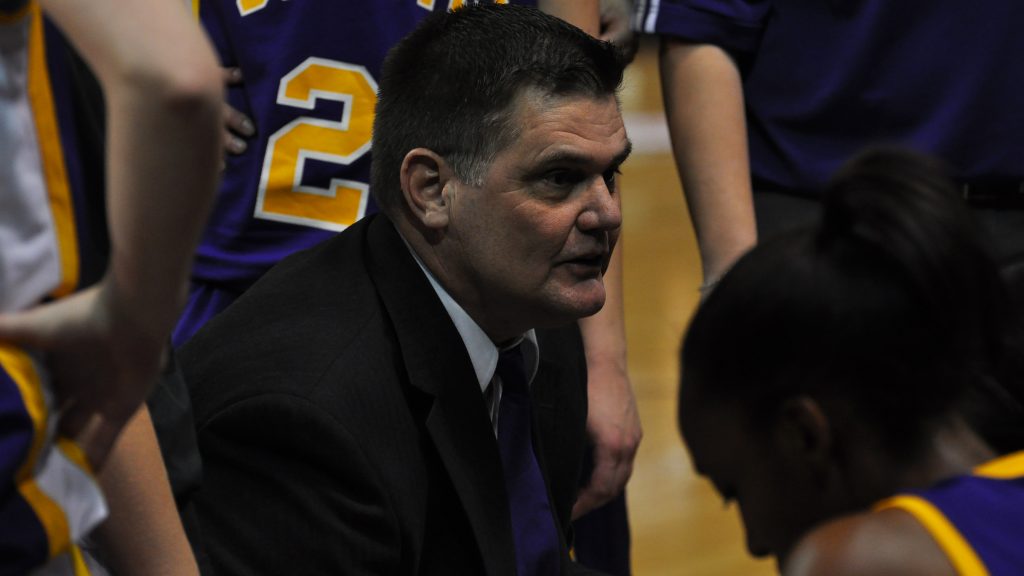 Home About News Feature: Remembering the Persistence of a KWU Legend

Gordon Reimer’s goal when he became women’s basketball coach at Kansas Wesleyan University was simple but ginormous in its scope.

Reimer inherited a KWU program that had enjoyed little success for several years when he was named head basketball and volleyball coach in 2004, but he quickly turned the tide.

The Coyotes won 14 basketball games his second season, equaling the number of victories they’d had the previous four seasons.

It was a springboard to a new era in KWU women’s basketball that continues today. In eight seasons Reimer guided the Coyotes to a 140-105 record (135-81 after his first season), two Kansas Conference championships, two NAIA National Tournament berths (both teams advancing to the second round) and a school record 31 victories during the 2010-11 season.

He departed as the all-time leader in victories after the 2011-12 season.

KWU will recognize Reimer for his accomplishments when he is inducted into the Coyote Athletic Hall of Fame at 8 a.m. Oct. 22 inside Muir Gymnasium as part of the 2022 Homecoming weekend.

“I feel like it’s a real honor,” Reimer said. “That team that’s getting inducted really deserves it because they accomplished more than any other team in a long time. Because of what they accomplished, I get to ride along on their shirttails.”

KWU was Reimer’s first head coaching assignment, but he had a plan.

“Obviously, I knew right away recruiting was going be the key,” he said. “We had to recruit the right kind of players, the ones that fit Kansas Wesleyan, the ones that fit my personality. And you know, it takes a couple of years to get that ball rolling and we got there.”

Reimer quickly discovered that coaching, recruiting and administering two separate sports was too much. After three seasons of double duty, KWU separated the jobs and hired a volleyball coach – Reimer exiting after compiling a 48-42 record.

“That helped a lot because I was trying to recruit 45 players for both teams,” he said. “When I could just concentrate on one team I was only trying to recruit 20 or 25 players. It really helped me get a lot more players.”

The basketball dividends were almost immediate. The 2008-09 team finished 27-6 – an improvement of 15 victories over the previous season – and won the program’s first KCAC title since 1988. The Coyotes advanced to the second round of the NAIA National Tournament after defeating Aquinas, Mich., in the first round.

The season also provided Reimer with the game he cherishes most – the KCAC Tournament championship March 3, 2009.

“I think my most memorable moment was playing Sterling College for the championship tournament in Sterling, Kansas,” he said. “We won that game and cut the nets down in their gymnasium.”

Recruiting good players was half the battle. Reimer also was adept at developing and enhancing players’ skills and talents after they arrived.

Kaylaen Dittmer, a 2019 KWU Hall of Fame inductee, said one of Reimer’s strengths was his persistence.

“The biggest thing was he never gave up on me,” said Dittmer, who was a leader on the 2008-09 teams. “He always knew I could reach my full potential and found a way to make sure I did. He always believed in me. That was the one thing I remember most about coach Reimer, and I really appreciated it.”

Dittmer recalled how Reimer helped her through a tough stretch as an upperclassman.

“I was struggling my junior year,” she said. “He knew I could be the leader that the team needed and he found a way to make sure he got that out of me. I owe a lot of my success to him and his ability as a coach.”

Reimer’s sidekick on the bench was assistant coach Ryan Showman, who was promoted to head coach after Reimer left and enters his 11th season in 2022-23.

“Ryan is an amazing person, number one,” Reimer said. “I really enjoyed having him as my assistant coach. He took care of a lot of things that nobody knew about that would free me to do more recruiting. He took care of the everyday things to let me look at the overall picture.”

Reimer also pointed to the opening of Mabee Arena in 2008 as a key development after coaching his first four seasons inside Muir Gym.

“It was tough bringing a recruit in to show them where they were going to play,” he said. “Obviously, it was not even close to what they were playing in in high school, so it was kind of a disappointment for them to see that.

“But I convinced a group of young ladies that we were building and we had this new arena coming. They all bought into that and came over to Kansas Wesleyan. It was just a really good situation at that point.”

Reimer coached five NAIA All-Americans and 31 All-KCAC players during his time at KWU. He was named the 2009 KCAC Coach of the Year and the 2009 Four-Year College Coach of the Year by the Kansas Basketball Coaches Association. He is one of only two coaches to win over 100 games in his career for the Coyotes.